The Joongang Daily reported the other day that... well, here's the title: "Graffiti punks from abroad target Seoul’s subway."


On Feb. 2, four Australians in baseball caps and hoodies appeared around Wangsimni Station, eastern Seoul, at three in the morning. They carefully scoped out the area and then stopped in front of a ventilation window behind a bus stop. They cut the bars of the window and swung down to a temporary garage where a car for the Line No. 5 subway was idle. Using spraypaint, they covered the car with graffiti art and then moved on.

They then tagged two more trains, one two days later at Anam Station, and another at Sinnonhyeon Station on Feb. 5. The Joongang Ilbo's Korean-language article includes this graphic (click to enlarge):

And yeah, judging by the noses, they do seem to have been foreigners: 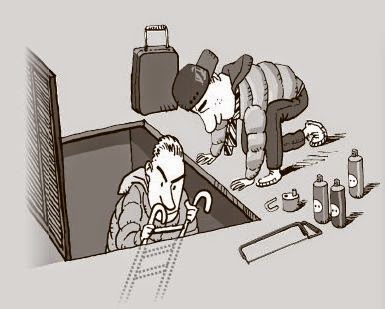 I found this to be a bit spooky:


It was only after they flew back to their home country on Feb. 7 that the police identified the four Australians with security camera footage. They matched their faces on security footage from the airport and then checked immigration records.

We're then told that police are baffled by foreigners who "knew so expertly the subway stations' structures" and that "We believe most of them were painted by foreigners." In fact, they "discovered that most of them are from Australia or Canada based on the style of graffiti paintings." That's some impressive sleuthing. The Joongang Ilbo then goes on to interview a Korean graffiti artist, which begs the question why the police are saying it must have been done by foreigners.


Lim Hun-il, a pioneering Korean graffiti artist better known as Hudini, explained that “seeing a train running around the city with their graffiti art on it is like the biggest honor.”

Another graffiti artist conjectured, “It is likely that foreigners who used to practice graffiti art are working as English teachers during the day and painting at night.”

Actually, though, that's not what the Korean-language article by the Joongang Ilbo reported. In it, after that comment by Lim Hun-il, the journalist adds that "The fact that Korea's subways are so clean may have inspired such 'graffiti expeditions.'" This is followed by a quote from "a graffiti artist" who says, "foreigners who used to practice graffiti art and worked as foreign language instructors after entering the country may have let their friends know about Seoul's subway." One assumes, in the context of talking about how foreigners could have known about the subways, that these "friends" they let know about Seoul's subway were overseas. The article notes that:


No foreigner has been caught by police for defacing the trains, possibly because they have left the country quickly like the Australian group. Property damage is not a serious enough crime to try to extradite them.

Apparently that's not the case in Singapore. The article also notes that incidents of graffiti on trains have been increasing, and lists the locations of each incident: 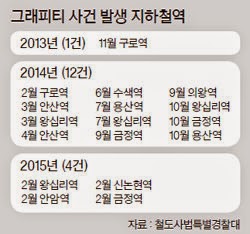 The Joongang Ilbo has been on a bit of a crusade here, translating another article today, as well as publishing a CBS radio interview with a Korean graffiti artist. I'm not sure that publishing the exact locations of the incidents was the best idea if they wanted to stop it from happening, but then I'm not an editor there.

Wet Casements also has a post about this here.
Posted by matt at 5:36 PM