Anyone who is curious what Yongsan Garrison looked like when it was the headquarters of the Japanese army in Korea is encouraged to check out the 1944 movie '병정님,' or 'Dear Soldier,' which is described and reviewed here. The film was shot after the Korean language was banned from all films made in Korea and is essentially a one-dimensional propaganda film showing how wonderful conscription will be for Korean soldiers. On the bright side, the locations are interesting, with soldiers doing target shooting at a rifle range which is now in Gyeongnidan, amphibious landing training on the Han River, and PT and drilling in front of what is now CFC HQ on Yongsan Garrison; the buildings seen below still stand today. 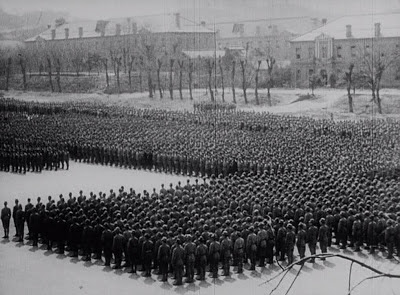 As it turns out, the film can be watched at Youtube here.

Very interesting, if not so much for the plot; I like the shots of Seoul at the beginning.

The old man at around 10 minutes in is speaking Korean, though, isn't he? Were there some exceptions to the all-Japanese requirement?