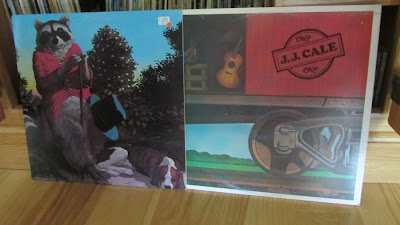 I was surprised to see a death date when I looked up JJ Cale on Wikipedia last night, and that he passed a week and a half ago. His first LP, 'Naturally' is an old favourite (it can be heard here), as is his second, 'Really,' which can be heard here. His blend of rock, country, folk, blues and jazz is pretty unique, as is his guitar playing. He's probably best known for Eric Clapton covering his songs 'Cocaine' and 'After Midnight.' I first heard of him via Spiritualized's song 'Run'; upon listening to him, I realized that his guitar playing influenced Spiritualized's predecessor, Spacemen 3's album Perfect Prescription pretty heavily.

Here's one of my favourites from 'Really':

As well as 'Magnolia,' from 'Naturally':