Some links related to Korea and WWII

A discussion at the Korean Studies List about why Korea was not bombed by the US during WWII led Bill Streifer, who runs the Flight of the Hog Wild website, to post a WWII bombing target map of Korea. It makes quite clear just how much Japan concentrated heavy industry and power generation in northern Korea.

The story of the flight of the Hog Wild B-29 bomber, about which Streifer is writing a book, is an interesting one. The bomber set out in August 1945 to deliver relief supplies to the allied POWs being held in Hungnam (now in North Korea) when it was shot down by Soviet planes - arguably the first shots of the cold war. He also tells the story of Operation Eagle, in which an American C-47 landed at Yeouido Air Base on August 18, 1945 in order to check in on the POWs in Seoul, and the rather interesting reception they got from the Japanese (download pdf here, starts on page 13).

On a related topic, the Korea Studies list also mentioned an article by Yong-ho Ch'oe which I found at Japan Focus titled 'Korean Prisoners-of-War in Hawaii During World War II and the Case of US Navy Abduction of Three Korean Fishermen' The story of Korean labourers captured on Pacific islands (in which at times only ten percent survived the battles which took place), of three Korean deserters from the Japanese army in Burma who joined the OSS, and of the three Korean fishermen abducted off the coast of Korea by a US submarine makes for interesting reading; the editorializing, not so much.


Long before North Korea's kidnapping, the United States committed a similar act, equally outrageous and reprehensible. The American abduction of three Korean fishermen deserves no less condemnation by the American public. [...] They too were innocent victims of immoral and illegal acts perpetrated in the name of war.

Japanese civilians who were kidnapped and held for decades - or for the rest of their lives - in North Korea during peacetime and three fishermen kidnapped and held in a POW camp in Hawaii for six months during the biggest war in history? What an apt comparison!

And also on the WWII side of things was last night's RAS lecture by Czech ambassador Jaroslav Olša, jr. about Han Hŭng-su, who spent the early 1930s studying in Japan, and late 1930s and much of the 1940s studying in Europe before returning to North Korea and being purged shortly after the war:


His life and work made a lasting impact on South and North Korean archeology as well as on the study of Korean history and literature in Czechoslovakia and the knowledge of Korean literature in German-speaking countries in Europe. Multi-talented scholar, polyglot speaking at least six languages and author of numerous books and articles published in Korean, German, Czech, Polish and English, he is now being slowly rediscovered.

It was a fascinating lecture, and Ambassador Olša was an engaging speaker; I'll post a link to the video once it's available.

Here's a map I made years ago of the cities the US bombed in Japan during WWII and the percentage of city area destroyed (sourced from 'The Fog of War'): 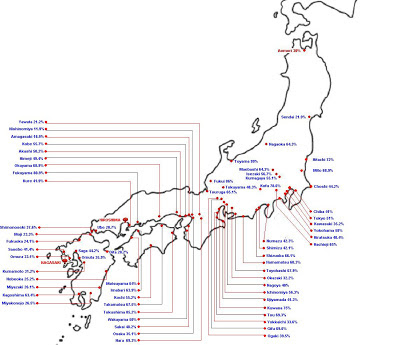 Interesting stuff as always. But until the very late stages of the war did the US have any practical ability to bomb any part of Korea? Even the Doolittle raid on Tokyo was, effectively, a gimmick with zero strategical power (albeit a lot of morale boosting power back in the US).

I think US could since originally B-29 attacks began at China and had to pass Korea to do so.

Interesting. I'd believed the bombers were flying from Tinian, which made Japan the closer target. According to this, that's true, but they initially started from China. The move to Tinian and Saipan was because they couldn't hit Tokyo from China. One imagines that southern Korea, at least, could have been hit from China, but then the main targets in Korea were in the north. Either they were harder to strike, or they didn't consider Korea an important target at the time.

They could also have hit southern Korea by the time they were firebombing Tokyo in the spring of 1945 (and they did eventually hit as far north as Aomori, just south of Hokkaido). The commentary on the Korea Studies List, however, described US planes flying over southern Korea but not dropping bombs. The only Korean city to be bombed during WWII was Ranan in the north, by the Russians: "On August 15, 1945, at 13:30 hours, 29 Pe-2 dive bombers of the 55 BAP bombed the railroad station at Ranan (later Nanam)."

And on a related topic, I just added this map, which I made years ago, to the post, which shows all of the Japanese cities bombed by the US and the percentage of city area destroyed (sourced from 'The Fog of War').

A book on Hog Wild