Some photos of Koreans taken by Jack London in 1904

Quite some time ago I posted the first three parts of a series titled "Foreign correspondents in Korea during the Russo-Japanese War":

Part 1: From Japan to Korea
Part 2: In Seoul and Chemulpo
Part 3: Along the coast of Korea

I'd always meant to post more, and do still mean to, but there are dozens of photos and several hundred pages to go through to tell the story (though since I began, F.A. McKenzie's book From "Tokyo to Tiflis: Uncensored Letters from the War" has since been digitized at archive.org, which would make transcribing it much easier).

I've also posted background information about Robert Lee Dunn, one of the journalists who was in Korea, as well as two articles he wrote, "Making Presidents by Photography" and "Jack London knows not fear." I later posted an article from 1970 by Richard Rutt about Jack London's Korea-related fiction.

One thing that had intrigued me for years was talk of an upcoming book of Jack London's photographs. I'd look from time to time to see if it had been released, but it never was. Well, apparently, I hadn't looked during the past two years, since 'Jack London, Photographer' was finally released in late 2010. The cover photo (which can be seen here as well) was clearly taken in Korea. 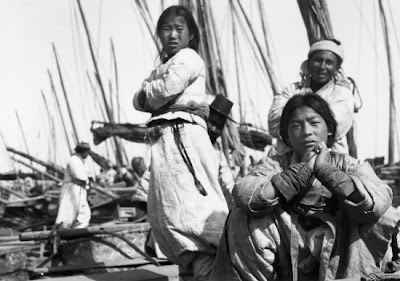 A number of London's photos also appear in "Jack London's Racial Lives: A Critical Biography," parts of which can be read here (Italicized captions are London's own). London apparently took many photos in Korea in 1904, especially of refugees, children and elderly men: 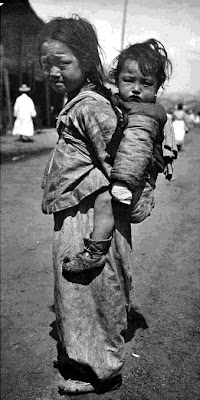 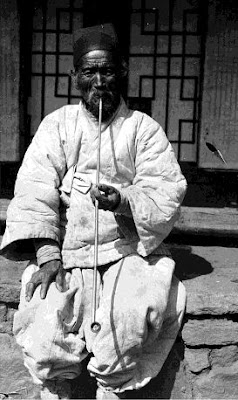 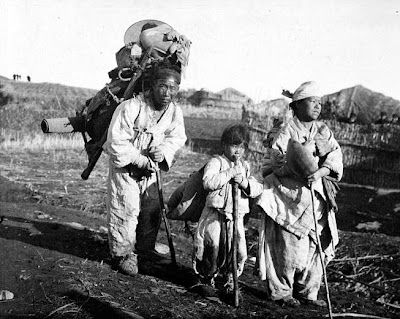 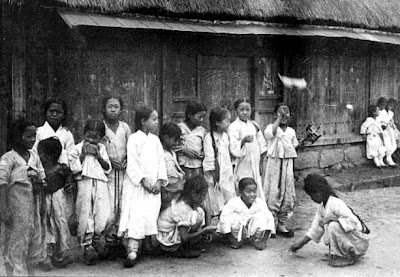 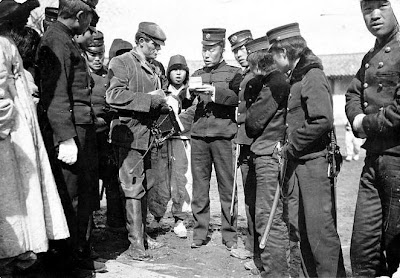 "Trying to fire yours truly out of summer palace." 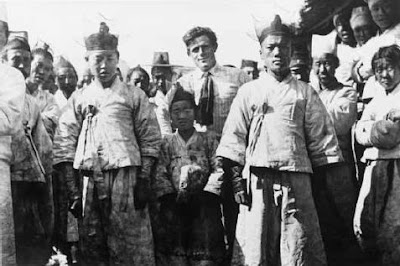 The last photo is from here, one several articles (here and here) about the publication of the photo book.

My favourite photo would be this one (from here): 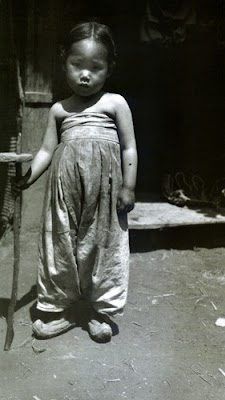 Korean Girl made Homeless by the War, Seoul, Korea, 1904
[Caption from site.]

One of the things I like about this photo is the fact that he obviously crouched down to take the photo from her level. I think these photos show a lot of compassion towards the subjects on the part of the photographer.

Ironically, Jack London is not well looked upon by Koreans, and to be sure he did drone on about the 'white man' (resulting in a recent article by Kim Jonggab titled "(The)rhetoric of the white body and narrative contradiction in Jack London's Russo-Japanese War Correspondence") and wrote some rather unflattering things about Koreans. On the other hand, that same writing also reveals him being humbled by Asians on several occasions; often by the Japanese military, but also by Koreans, such as when he is roused by his 'boy,' Manyoungi, to put a stop to the local Yangban keeping the money the Japanese troops were paying for the peasants' food, and hoping to 'avenge' Isabella Bird Bishop's mistreatment at the hands of another yangban a decade earlier, goes to have a talk with the man. After he throws his weight around enough to satisfy both Manyoungi and his desire to avenge Bishop, he is assured the money will be returned. However:


But so far as concerned the return of the seventy per-cent squeeze, I knew, and Manyoungi knew, and Pak-Choon-Song knew and we all knew one another knew, that Pak-Choon-Song intended nothing of the sort.

More on Jack London's racial views can be read here.

As for the photo book, it has 230 photos, so I imagine it has many more photos taken in Korea. From the photos above and those found following the above links, it certainly looks worth purchasing.
Posted by matt at 1:19 PM

Powerful images. Thanks for posting.

I always enjoy your material - great stuff. Thanks for coming to the lecture on Tuesday.

Fantastic post as usual. Great photos and I loved the Bishop connection!