As the Joongang Daily recently noted, two weeks ago, the Canadian Embassy in Seoul


kicked off a series of celebrations throughout the year to commemorate the 50 years of Seoul-Ottawa diplomatic relations, which was Jan. 14.

One of those events is a recreation of the 1951 Imjin River hockey game on Feb. 3  at 9:30 am at the Seoul Plaza skating rink, which will see two time gold medalist Catriona Lemay Doan act as honourary referee for the game. As per the Embassy:


Canadians’ enthusiasm for hockey was in evidence during the Korean War, in which 27,000 Canadian troops participated in defence of freedom. Many of these troops were surprised to find in Korea a climate not much different from that which they had left in Canada, with cold winters meaning frozen rivers where they could play their favourite sport.

In honour of the 60th anniversary of the armistice, and the 50th anniversary of diplomatic relations between our two countries, the Canadian Embassy - in collaboration with the City of Seoul, the Pyeongchang Olympics Organization, the Korea Ice Hockey Association, and our sponsors - are proud to commemorate that involvement. On 3 February, 2013 at 0930, the Embassy, with the help of a locally-based hockey group – the Geckos – will be organizing a demonstration game on the ice rink at Seoul City Square, as part of the final day of the skating season in Seoul City. The teams will be wearing the colours of the Canadian teams which squared off on the ice of the Imjin River, almost 61 years to the day. We are also pleased to arrange with the City the opportunity for citizens to work with some of Korea’s best hockey instructors and share the enjoyment in this winter sport which unites Korea and Canada.

There will also be an exhibition of photographs made available by Library and Archives Canada. These photographs demonstrate the enthusiasm for the game that the troops carried with them to Korea. Playing hockey in the midst of the terrible events must have been one way to bring a bit of home to the troops, amid the trying conditions of the war.

A comment at the Hole also links to this page I'd never seen showing the photos and remembrances of a Canadian soldier who was in Korea during the war which has a photo of soldiers watching a hockey game "organized for the amusement of the visiting dignitaries."

Here are some of the photos provided by the Canadian Embassy: 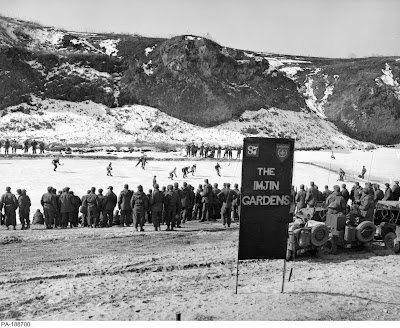 "Imjin Gardens" is the scene of a hockey game between teams of the Royal
Canadian Horse Artillery officers and "Van Doos" officers, Korea, 1 Mar. 1952 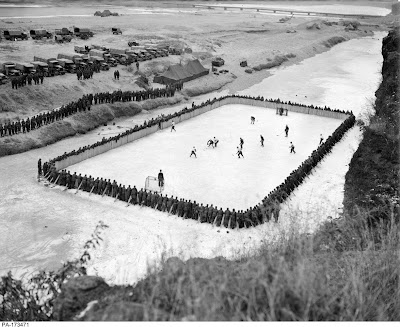 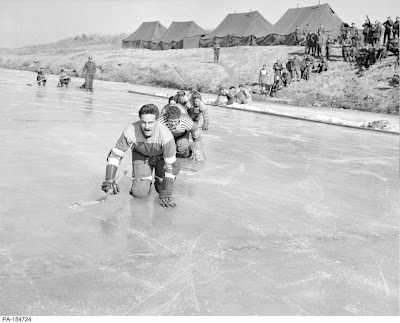 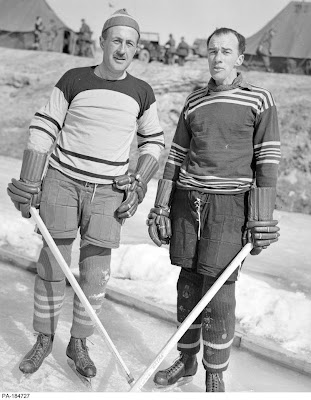 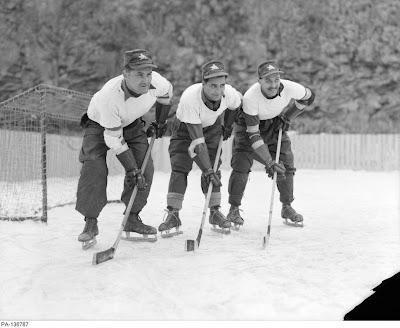 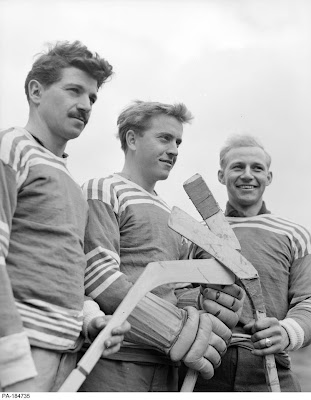 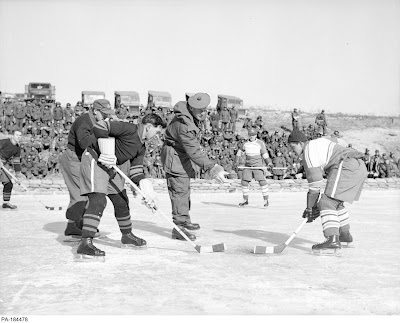 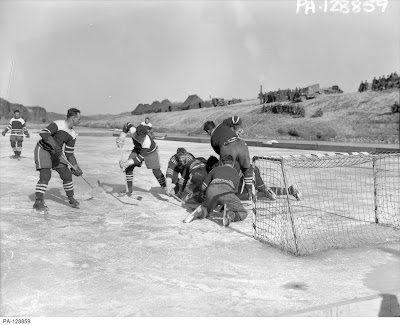 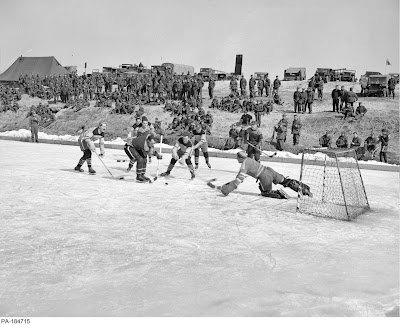 That Marmot's Hole post notes that these and other such photos will be on display at Schofield Hall on the first floor of the Canadian Embassy from January 28th to February 1st, and will then up at Seoul Plaza on February 3, the day of the game.
Posted by matt at 10:49 PM