The Joongang Daily reported today that a bus depot in Gangseo-gu caught on fire yesterday morning:


A fire in the middle of the night at a bus storage yard in western Seoul burned nearly 40 buses, disrupting some bus routes in Seoul and causing inconvenience to workers trying to get to work a few hours later.

Thirty blue city and green village buses parked in a yard in Gangseo District, western Seoul, were destroyed in the fire while another eight were partially damaged. There were 85 vehicles owned by the private Youngin Transportation Company in the yard. The total damages were estimated at 1.5 billion won ($1.4 million).

The police are not ruling out arson. “Given the location is not a crowded residential zone but a wide open area exclusively for parking with no confirmed inflammable elements, there is a possibility the buses were torched,” said detective Lee Geun-wha from the Gangseo precinct.

The fire prompted the Gangseo Fire Department to dispatch 176 firefighters in 57 fire trucks. It took them one hour and 45 minutes to extinguish the blaze. There were no casualties. 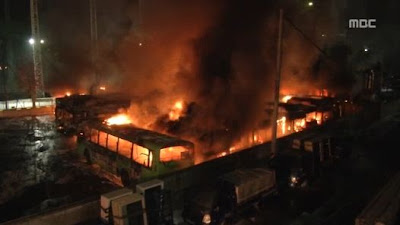 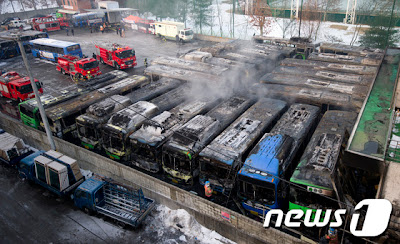 Living in Gangseo-gu as I do (and relatively close to two bus depots), I was curious where this was. According to this News1 article (the source of the above photo), it was in Oebalsan-dong; a look on Daum maps turned up the location (which is obviously next to a driving range in the photos above):

It's fairly close to Ujangsan Station, and pretty much next to the Balsan development and an ROK military base.

And according to MBC, police are now certain it was arson.
Posted by matt at 11:17 PM