The state of beer in Korea

The other day, the Marmot's Hole posted about an article by the Economist which criticized [South] Korea's boring beer and stated that North Korea's Taeddonggang beer was better (something I said 6 years ago, though it's not easily available here now). As noted in the Marmot's Hole post and comments, the Donga Ilbo took issue with the Economist (because, of course, a tenet of the nationalist religion here is that all Economist articles dealing with Korea must be criticized), though netizens seemed to agree with the Economist. In the end, much like control of [pick an industry] by just a handful of jaebeol, Korea's beer remains bland due to Hite and OB dominating the industry. To be sure, in Canada things aren't so different when looking at domination of the industry by two companies (according to this article, Molson Coors and Labatt Breweries (owned by A-B InBev) control around 80% of the market), but a trip to the Beer Store, even in a small town of 1,300 people, offers at least 60 beers, most of them from smaller Canadian breweries.
It's too bad the Economist article chose not to focus on the new kid on the block, beer company-wise, in Korea: 7brau. As a Korea Herald headline in October, read, "Korea’s first production-licensed craft beer company launches its canned IPA in Homeplus."


Until now, ale in the can or bottle was a niche market restricted to imported brews. India pale ale ― that hopped-up brew hailing from 18th and 19th century England ― even more so. Then one South Korean brewery changed the course of history last Thursday with the launch of its very own IPA in cans.

It goes on to note that ales in general, and IPAs in particular, are not so popular in Korea, which is ironic, considering the first beer ever tasted in Korea may have been IPA, as reported by Cyprian Bridge when the Audacious, the flagship of Britain's China Fleet, visited Geomundo in 1875. 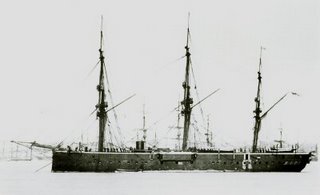 Some of the Korean officials on the island boarded the ship:


Hospitality was thrust upon them in the English manner by the offer of the national beverage. They expected their hosts to taste first, and then they themselves took long sips of the ale. The glasses were put down, and no sign of pleasure or of disgust appeared upon the face of either; but, after a decent interval, the tall Korean called again for paper and pencil, and this time wrote a request that the pale-ale — not, it is true, improved by a voyage half round the world — might be given to his low-born countrymen who worked the boat in which he came on board.

It's nice to see an IPA finally being made here. As the Herald continued,


7brau (also known as Sevenbrau) ― a craft beer company that first made a name for itself with draft beers sold throughout bars in Seoul ― is a pioneer in more ways than one.

Not only did has it released its domestically-produced IPA in Homeplus stores throughout Seoul and Gyeonggi Province, it is the nation’s first mid-to-small-sized beer company to nab a standard beer production license that allows it to brew beer that can be sold in more than one establishment. From a larger perspective that essentially means domestic craft beer is no longer a brew that can only be primarily enjoyed at a microbrewery or brewpub.

7brau launched its India pale ale canned last Thursday. [...] The IPA is currently sold in 30 Homeplus outlets throughout Seoul and Gyeonggi Province, with plans for expansion to stores nationwide by next year.

The article also notes that 7brau is only the "third beer company to come into being in Korea," with the other two being "domestic beer goliaths Oriental Brewery and Hite Jinro, whose history goes as far back as the 1920s and 1930s."

The Korea Times, Joongang Daily, 10, Groove, and Homebrew Korea have also spilled ink on 7brau's IPA. At the latter link I learned that 7brau has been, under its new guise as a brewery, distributing a few draft beers:


They offer a porter, pilsner, and pale ale. The beers are unpasteurized. If you go to Hollywood you can get the unfiltered pale ale, at all the other bars its filtered. I strongly recommend going for the unfiltered version, there really is no comparison. They don't use any adjuncts and import all their ingredients from Europe and the US.

I haven't tried any of the draft beers the brewery has been distributing, but I have tried the canned IPA. While it's certainly not as favourful as Indica or Alley Kat, it's not bad, and a step above other Korean beers. It's not surprising it's not as bitter as imported IPAs - Koreans generally don't like their beer bitter. A friend ordered Alley Kat for a bar he was working at a few years ago and had to mix it with Cass (creating Alley Cass - the horror) in order to sell it off. The canned IPA, at any rate, is distributed more widely; a list of the
Homeplus locations in Seoul is here and countrywide, here. The one downside is that it certainly isn't placed with other Korean beer at the Homeplus locations I've been to - it's set off on its own.

I've actually been drinking 7brau's beer for awhile; the company is associated with the Carib brewpubs, the first of which opened in Balsan in 1998. A handful more followed (I went to the one in Bucheon back in 2001) before it opened two '7brau' brew pubs, the second of which opened in Balsan, which is pretty close to where I live, in 2005. To attract customers, they spent their first year running a daily buffet, open 6-10 weekdays and 6-9 weekends, which gave you all you could eat - and drink of the house beer - for 15,000 won. Which was pretty sweet. The beer at Balsan is the typical triumvirate of pilsner, wheat, and dark, but it's usually pretty good. Anyways, it's nice to see something good come out of the Balsan area (other than Lim Soo-jung, who went to high school nearby). Hopefully 7brau finds success and paves the way for other small companies to find a niche.
Posted by matt at 2:53 PM

Loving the beer selection in Homeplus these days, Rogue, Hitachino, and the Lost Coast stuff... only wish they could be cheaper or bought in cases or six packs at wholesale price heh