Guerrillas in the snow

While running errands yesterday, I remembered that I'd received a nice pair of thinsulate leather gloves last year for Christmas, and when I got home I dug them out and put them in my bag so they'd be on hand if I needed them. Good timing! 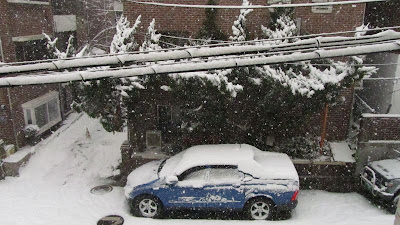 While the snowfall was only three inches, for Seoul that's quite a lot (an apparently has been for a long time). And it was certainly enough for the students to enjoy: 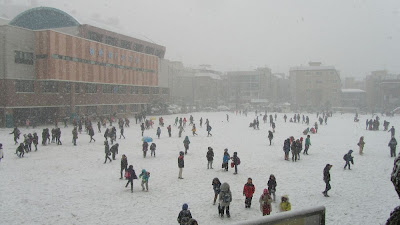 While I'd worn the gloves while hiking before, they'd never been in contact with snow much. As it turns out, after throwing 100+ snowballs and making a couple snowmen, they were still dry inside. I don't imagine the kids without gloves would have been very comfortable when they got inside and their hands began to thaw, though the more creative ones made due with dustpans which they used to scoop up and throw snow. I was impressed by the guerrilla tactics of a quartet of grade 3 girls who would wait until I had my back turned and then would close in and send off a volley of snowballs all together before running off in different directions, only to regroup for another sneak attack once my back was turned. Not bad for a bunch of 9 year olds, but then, considering the quasi-military drilling a gym class involves (and all the marching that is flawlessly executed at sports festivals), perhaps not so surprising, either. Give them the training these girls got and they'd be a formidable force...
Posted by matt at 9:16 PM