It would appear I jumped the gun on my last post of NSET cartoons to add to the big collection. Most of my image searches were done using Naver, but a Google search or two turned up some new (and fun) cartoons I hadn't seen before.

First up, on October 31, 2009, Sports Seoul published an article titled "Pursuing the reality of sex crimes by foreigners which threaten Korean women." This came out during the post 'Na-young case' furor over sex crimes during which crimes by foreigners were also reported to be a threat (despite their sex crime rate being 5 times less than Koreans') and GNP Rep. Lee Ju-yeong said "Of foreigners, native speaking teachers are especially potential child molesters." Good times. The Sports Seoul article opens with this:


Sex crimes against Korean women by foreigners are rampant. From Southeast Asians who enter the country illegally to earn money, to white native speaking English instructors, foreigners with various nationalities and jobs are committing sex crimes. There isn't much information about the pasts of foreigners who come to Korea, and there is also no small amount of fear that because punishment of sex crimes is lax, sex crimes by foreigners will greatly increase. We've examined the types of sex crimes committed by foreigners.

The article goes on to look at crimes by different groups, and bases its tales of crimes by foreign teachers on Anti English Spectrum and the contents of Choi Hui-seon's articles for Chosun.com from July 2009. I think you might be able to tell who the foreign teacher is in the cartoon below: 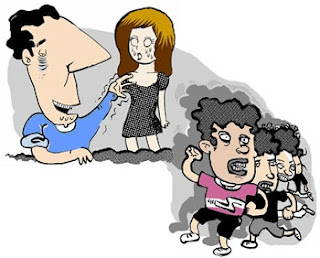 A scene from a K-pop video? Apparently not.

On December 1, 2009, Ilyo Sisa published a round up of incidents for that week and included a section titled "A bunch of foreign instructors headed to prison... why? A 'stoned lecture' while on drugs," which reported that there had been a shocking arrest of foreigners who worked in kindergartens and schools, including a regular [employee] instructor at a university and an actor seen on a terrestrial broadcaster. Five were arrested, one booked but not detained, and three more were being pursued for smuggling or taking cocaine or pot cookies in Incheon. (SBS also reported on this bust.) 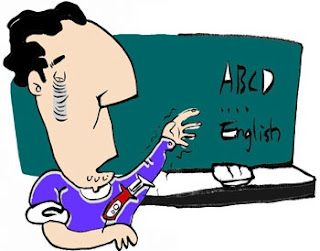 Now is it just me, or do the last two cartoons look eerily alike?

Other than a few more lines under his eyes and a curved nose in the drug cartoon, the teacher is exactly the same. Was it the same (lazy) artist working for both Sports Seoul and Ilyo Sisa, or did the latter rip off the former? If they could just make a third cartoon with him denigrating Korea in the classroom while holding a fake diploma, they'd pretty much have all the bases covered!

Our next cartoon is also from Ilyo Sisa, in an article titled "Unqualified English instructor who was a former gangster caught; In the US he was a 'murderer', in Korea, a 'teacher.'" It was published on March 30, 2010 after a Korean American Gangster wanted for murder in the US was arrested while working as an English instructor in Korea (which also gave us this cartoon by the Donga Ilbo): 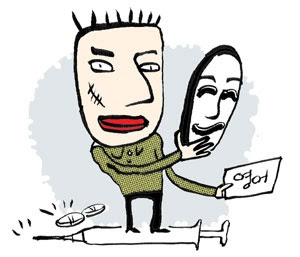 (I didn't realize V was a drug addicted English instructor)

Up next is a cartoon from a Seoul Sinmun article from December 9, 2011, subtitled "American gangsters deported for murder, drugs and gun smuggling became native speaking teachers" (more about that story can be read here):

And last but not least is an image taken from a blog (not a newspaper), but which I decided to include because it looks like some kind of creepy muppet. 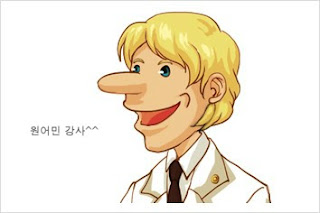 Fantastic cartoons. This year's crop is finishing up on a high note.