On September 21, Yonhap reported (in an article with "Dokdo is Korean land" in the title) that members of the TaLK program in Gangwon-do would be going on a trip to Ulleungdo and Dokdo, because "Letting foreigners who live in Korea and have an interest in Korea know about Dokdo is very important." TaLK stands for 'Teach and Learn in Korea' and allows foreign university students (who have not graduated) to come to Korea and teach English in rural schools for less money than NSETs make. The idea was to attract ethnic Koreans from abroad, though with all the talk of 'unqualified foreign teachers' that gets bandied about (such as Newsis reporting last week that "4 out of 10 native speaking English assistant teachers are unqualified"), allowing non-graduates to teach here is not particularly consistent.

These kinds of trips to Dokdo for foreign teachers are nothing new; Brian linked to an account of a late 2008 trip and wondered, what with all the propaganda they are both subject to and made to become the subjects of, why anyone would want to go. One answer, perhaps, might be the free trip to Ulleungdo. I posted photos of Ulleungdo to accompany this report about a 2011 trip for NSETs to Dokdo (made to promote a "correct understanding" of the islets). Such visits tend to require that the teachers write essays about their experience, however, and the use to which essays will be put is made clear in this article about a similar trip earlier this year:


Gyeongsangbuk-do Dokdo policy head Heo Chun-jeong said, "Directly introducing foreign teachers who understand Korean culture and history to Dokdo is meaningful and important." "I want these visits by native speakers to spread continuously in the future."

Gyeongsangbuk-do plans to have the foreign teachers who participated in this publish the story of their visit to Dokdo as essays, distribute them among related organizations and post them on the 'Cyber Dokdo' homepage for use as promotional material.

They can't really make it clearer than that, can they? There are other ways to encourage the production of such propaganda as well.

An article written after the most recent trip, titled "Confirming that Dokdo is ROK territory," reports that about 40 Teach and Learn in Korea (TaLK) teachers went on a historical and cultural visit to Ulleungdo and Dokdo from the 24th to 26th, "ahead of the nation/race's holiday, Chuseok." The trip was meant to give them a chance to "take in the special and beautiful landscape of Ulleungdo and experience its unique island culture." The article includes this photo: 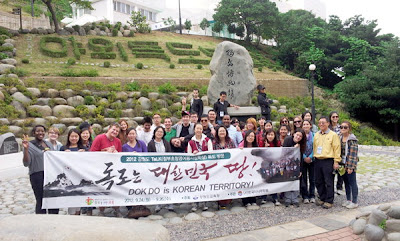 It gets worse, however:


In particular, they visited the Dokdo museum and saw materials and literature from Korea and abroad attesting to Dokdo being ROK territory, and they plan to remake "Gangnam Style," which has attracted attention worldwide, into "Dokdo Style," and upload the video to Youtube soon.


42 TaLK Scholars from Gangwon Province in South Korea traveled to Dokdo Island on September 25, 2012. After a difficult boat ride, these English teachers became a part of the 1% of Korean residents who have stepped foot on the island. To make the moment even more memorable, we danced to the now viral Gangnam Style as the first group ever to successfully do so on Dokdo Island.

Well, you have to admire how well-trained they are - they wave Korean flags and do the horse dance and everything! 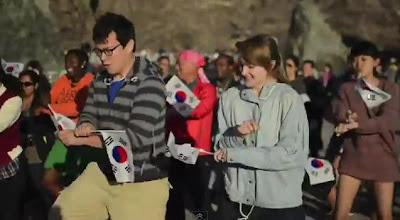 Maybe they should have dressed them in some of these fashions.

It's one thing to be a "white endorsement monkey" (a term coined by Gord Sellar a week or two ago) and parrot the 'correct' responses to questions about things like Dokdo in order to avoid having people beat their chests and scream "URI NARA! URI NARA!!" over and over, but quite another to dance and wave flags while making territorial claims for a country that isn't your own. I'm pretty sure there are enough English teaching clowns out there already.

I've made a comparison before between photos like this and this painting from the 1984 book "The People's Great Leader" (from here) titled "All the peoples of the world praising Kim Il Sung." 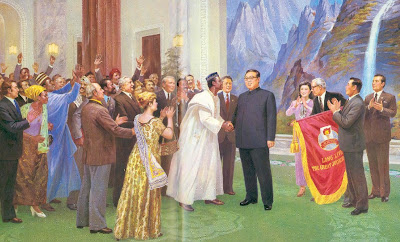 If only they had DPRK flags to wave...

You could also find similarities between this and the Shinchonji cult, which uses the Mannam volunteer group to get photo ops with foreigners in order to promote the cult in Korea.

The article above has more about the trip, however: 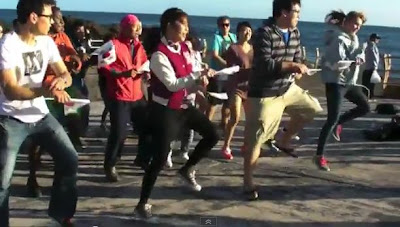 And I hope that quote was either invented or said at gunpoint.


Jang Seung-jin, the supervisor of international education for the provincial office of education, said, "Regarding the Dokdo issue, now is the time to broaden the range of promotion beyond Korea to target foreigners." "Because letting foreigners know about Dokdo is very important, we will continue to have [these] trips for native speakers."

One response to that last sentence might be "What native speakers?" It was reported a week or so ago that Gangwon-do plans to cut its NSETs by 60% by 2015 because they're not very effective in comparison to their cost. On the bright side, they do seem to be considered effective as propaganda tools. So that's something. And Dokdo is, at the very least, a great place for an NSET field trip, what with the lack of women to defile and children to molest.

Moving along, these minstrels play something thematically related to this to soothe your jangled nerves.

I am a 7th Generation TaLK scholar still in the program. I vehemently objected to the propaganda and especially the sign and dance. I am not pictured in ANY photo with that sign, I know of another scholar who also chose to not be pictured with the sign. One of the museums' guides said we would see an objective point of view and objective documents, much to my chagrin, it was the same propaganda stuff, along with information such as "Korea doesn't have to go to the Hage to debate the issue because Dokdo is Korean"... ummm.... Petulant child much? Many of the TaLK scholars are very young and may not realise the kind of statement that they were really making. Along with that are the gyopo scholars who are trying to connect with their culture, and as mentioned before, perhaps in some of their eagerness to learn and "become more Korean" they miss some things.

The trip was spectacular AFTER visiting Dokdo. We were able to see much of Ulleungdo and experience parts of Korean culture that I haven't seen since arriving the first time in Korea in 2006. Ulleungdo is breathtakingly beautiful.

In related news, the most brilliant of the masses have begun wondering whether Psy's viral popularity could be used to catapult Dokdo to the public stage in American media. I think they don't know anything about the American media.

Someone asked whether the government had asked him to do so, but whoever was speaking from an official position said, essentially, that they would consider it but have not done so yet. (Psy confirmed that he had not been contacted to do so, and would have to think about it if he was. Because, you know: the ire of fanatics, versus the American audience's baffled, "What's this dude's problem? What are these rocks supposed to be?" is, well... easy call.

(And besides, the people calling for him to talk about this issue in the States seem not to grasp that he's popular over there in part because he plays a kind of "safe" Asian clown figure in his video.)

By the way, my "Oh of course" was in response to the post, not to Sweet Cecilia's comment.

I forgot to provide a link for the follow-up news. FWIW:

I was a public school teacher in Seoul for a few years, and during my last semester (spring 2011) my head coteacher handed me an invite to one of these trips. I looked at it about long enough to realize that they wanted me to pay for it and handed it back. My co, being an intelligent sort of woman, was very understanding of the fact that I had better things to do with 200,000ish won (don't remember exactly) than be someone else's propaganda tool. From what SweetCecilia is saying, I'm glad I didn't go!

One of my students told me last week the Korean government was going to use Psy to promote Dokdo and I say they have already succeeded by using his music while he stands by saying nothing or acting like it ain't happening. More to come I'm sure! When I saw Psy dress up, sing, and dance around like Lady Gaga I said he was a tool, and now he is a government tool. I used to teach a Psy English lesson to young Korean students but now I'll have to reconsider or make additions/changes to it.