A look at prostitution among teen runaways

Back in June the Hanguk Ilbo published this article:

"1 out of 4 runaway teenage girls have experience selling sex"

Among those who had answered as such, 40.7% had experience of suffering sexual violence, and among those, 37.7% had been sexually assaulted/molested by family members or relatives.

The average age of those who particpated in the survey is 16 years old, 70.8% first ran away from home between the ages of 12 and 15, with the average age being 13.

In order to protect teenaged female runaways who are easily exposed to dangerous situations like sexual violence and selling sex, Seoul will expand its year-round on-the-street nighttime counseling. In particular, 'Drop-in center' support facilities where they can stay temporarily in emergency situations will be established in July.

I'd forgotten I'd translated this at the time until I saw the Hankyoreh's 6 part series on the sexual exploitation of teen runaways. Part 1, titled "Runaways flee abuse at home, end up in prostitution," opens with this introduction:


Last year, more than 20,000 young people ran away from home. That total only represents the cases that were reported to police. As of now, an estimated 200,000 adolescents are living on the streets around the country. Over 60% of the runaways are girls, children who have fled poverty and abuse at home. Roughly half of these girls are believed to be surviving on the streets through prostitution. For all the shock the South Korean public shows when confronted with sex crimes, it turns a blind eye to the kind of sexual exploitation that disadvantaged teenage girls are exposed to on a daily basis.

The Hankyoreh has translated parts one and two of this series, which illustrates pretty clearly why so many female teen runaways rely on prostitution to survive. Each part has several graphs based on the study described in the Hanguk Ilbo above.

Part 3 has the following graphs, the first from a survey of 96 female runaways in Seoul and Gyeonggi-do who had sold sex, March-April 2012, asking why they first sold sex:

(From top) No place to sleep, hungry, pressured, wanted to earn money, had no other job, entertainment expenses, as a favor to a friend, despair after being raped, curiosity, other.

The next 4 graphs are from a survey of 175 female runaways in Seoul and Gyeonggi-do, March-April 2012. The first asks what is the most difficult thing after running away: 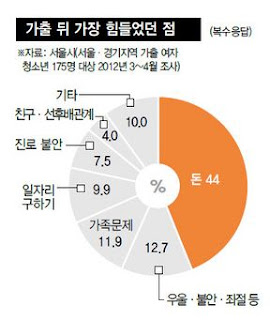 Part 5 has a list of teen runaway prostitution by type (clockwise from orange): "Conditional meeting," bodobang/noraebang/kissbang/dallanjujeom, propositioned on street, brothel/massage parlour/ticket dabang, other. 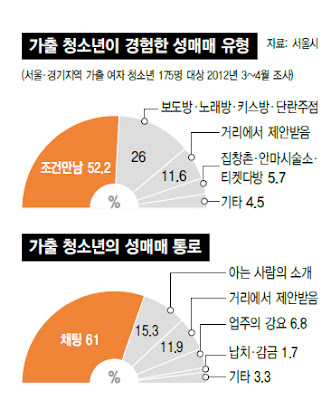 Above is a graph showing the most common paths to prostitution (clockwise from orange): Chatting, introduced by a friend, propositioned on the street, business owner forced them, kidnapped/confined, other.

I should note above that jogeon mannam, or 'conditional meeting,' has basically become the new name for wonjo gyoje, or 'compensated dating', about which I talked a great deal here. Whereas wonjo gyoje was a euphemism specifically for (freelance, often organized through the internet) teen prostitution, 'conditional meeting' is a more general term (mentioned, for instance, here back in 2004). I'd come across an article discussing this shift some time ago but can't offhand remember which it was. It might be "A culture that cultivates the prostitution of teenage girls: based on the experiences of prostitution among teenage girls," the abstract of which is here.

Part 6 has the following two graphs; the first is titled "Assistance needed most by teenage runaways." 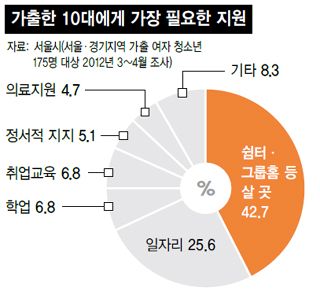 Below is titled "Rape/indecent assault against children and youth 2007-2011." 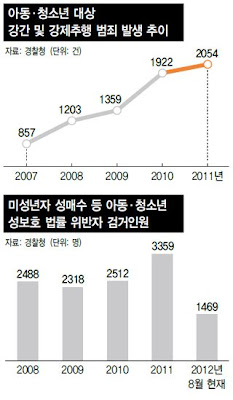 Hopefully the Hankyoreh will continue to translate this series. I've been meaning to post about the proposed changes to sex crime laws which have been suggested in the wake of high profile sex crimes against children this year, but there's been so much information it's hard to know where to start. When you see the numbers above and read questions asking why sex crimes against children and teens are so common, well, I'm pretty sure the attitudes which make teen prostitution so common and the reasons children and teens are targeted by rapists are pretty closely related - as is how they are depicted in the media. But that's a post for another day.
Posted by matt at 2:13 PM