The location of the old Incheon Foreigners' Cemetery

The other day I posted about the Incheon foreigners' cemetery, and how it had been moved from a location near Incheon Station in the 1960s. After being asked if it would be possible to find where it once stood, I searched around and eventually found this map, which lists the cemetery below: 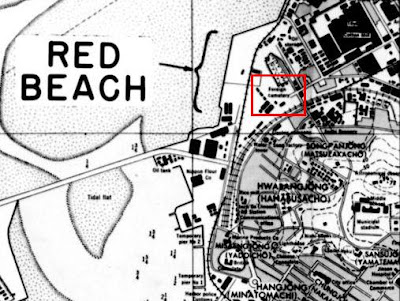 As is quite clear, Cemetery Hill stood behind one of the beaches taken by the Marines during the Incheon Landing in September, 1950. Here's what the area, just north of Incheon Station (which would be just south of the bottom left of the map), looks like today: 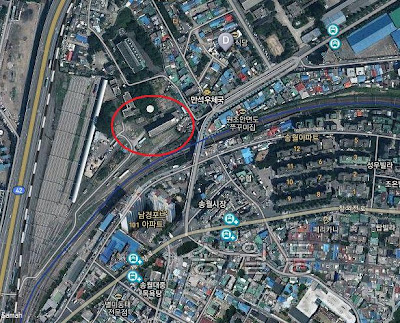 The Harold Cook article I posted the other day said that "[e]xcept for a small mound of earth, the Mansok-tong hill no longer exists, having been carted away as fill for part of the waterfront area." This isn't surprising, considering the fact that much of the west coast of Korea near Incheon has been filled in, sometimes kilometers out into the sea. Seeing as there is a rail yard there now, it's clear that 'Cemetery Hill' has been flattened.
Posted by matt at 2:52 PM