GIs teaching English in the 1990s

On November 30, 1997, Stars and Stripes published the following article about GIs teaching English in Korea: 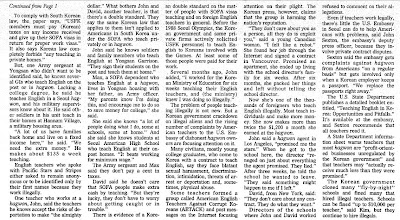 As this article mentions the fact that family members of GIs taught Koreans English prior to the 1988 Olympics (sometimes volunteering), I'll try to dig it up another article I read about the frustration these same people felt during the anti-American wave that accompanied and followed the Olympics.

Oh, and it may be worth mentioning that several of the people who appeared in the photos of the "sexy costume party" put on by English Spectrum in 2005 - which set off the wave of negative media depictions of foreign English teachers that has followed ever since - were most certainly GIs (unless extremely short buzz-cuts were the in-thing among English teachers at the time...).
Posted by matt at 4:35 PM