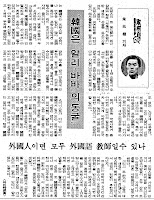 As I reported in part one, on August 12, 1984, Le Monde published an article about the job opportunities available to young French men teaching or translating French in Seoul. Three days later, on August 15, the Joongang Ilbo's special correspondent in Paris reported on the Le Monde article. Many thanks to Song Joosub, David Carruth and Benjamin Wagner for help with the translation.

To summarize the article, hoping to expand trade with France and ahead of the 88 Seoul Olympics in Korea, there are many employment opportunities in French language study and translation, and for French people who speak English well, Korea is a land where they can make money.

First we will introduce several passages from the article.

“A young French man named ‘Luc’ could not find steady employment in France, wandered about Southeast Asia and came to Seoul penniless. After a few months, because of his ability to speak French, he was able to rent a comfortable apartment and go on swanky vacations twice a year in Southeast Asia.”

“One young French man met an official from a Korean broadcaster by chance on a street in Seoul and, because he could speak French, was offered a well-paying job at the broadcaster after only this single meeting. He also married a Korean woman from a good family, and now enjoys a miraculous life like that in a movie.”

In Le Monde it was reported that the children of high ranking Koreans register in French language institutes and that “The land of the Morning calm is experiencing a hunger for our language (French).” It also said that in Korea one can shovel dollars like in 'Ali Baba's Cave,' a metaphor for "a rich mine", and there was no worry over the threat of the '40 thieves.’

Considering that I keep hearing through word of mouth and newspaper reports in Seoul about the huge foreign language boom in Korea, and especially how much the English and French fever has heated up recently, this kind of article is of course nothing new for a reporter.

As years go by, the international community contracts and the need for foreign language gradually increases; and on the one hand, as far as this goes, the fact that the foreign language fever is growing is a desirable situation and should be encouraged.

Furthermore, something we should be on the alert for is that, as Koreans cannot all become Korean teachers, foreigners cannot all work as foreign language teachers. One wonders if French people presently in Korea who are teaching French or who are entrusted with interpretation or translation have proper qualifications.

That this kind of treatment toward them is appropriate is questionable. It’s possible this treatment of foreigners is unreasonably kind.

The newspaper also brought to light generous payment by Korean government offices and other organizations, and the attractiveness of personal tutor fees. According to this report it is no mistake that for French people Korea is “Ali Baba’s” cave.

Nevertheless, it is ironic that the French people who enjoy a “dream life” in Korea keep saying “I want to go to Japan.”

First of all, those quotations from the Le Monde article are most certainly not direct "quotations," as they combine different parts of the article together and make creative additions like "a miraculous life like that in a movie." Luc does take two vacations a year, but only one is to southeast Asia. Still, the basic facts are correct, except near the end where he writes that "Le Monde introduced one French person who makes 9000 francs (about 900,000 won) for 9 hours of lectures" - he made 9000 francs a month for 9 hours of lectures every week. As to whether the currency conversion rate is correct, or if it's true that these people were making more in Korea than they would in France working a good job, I don't know.

Towards the end of what is clearly an opinion article, we enter familiar territory. While it's a fair enough point that merely knowing a language does not make one a teacher, the story being told is that these foreign teachers are treated very well - perhaps too well, perhaps we're too kind to them - and are they even qualified? Then the final sentence brings it all home: 'French people who enjoy a “dream life” in Korea keep saying “I want to go to Japan.”' So we have foreign teachers who Koreans treat far too well, despite their being unqualified, and they have the gall to be so ungrateful as to want to slap Korea in the face by going to Japan instead! If you think that last sentence may be blowing things out of proportion, it might be worthwhile to remember the date this article was published: August 15, the 39th anniversary of Korea's independence from Japan.

Other newspapers would respond to the Le Monde article (or to the Joongang Ilbo's coverage of it), beginning the next day with the Kyunghyang Shinmun article "Seoul Should Not Be a Workplace for Parisians."
Posted by matt at 6:18 PM

Canada should not be a workplace for Koreans!

Or does that sound racist?

The blog that dares to actually understand what's happening in Korea instead of just more and more opinion pieces.

I can translate/proof read for you if you want. I'm a native french speaker, and I'm very much interested in the subject.

Interesting old article and translation!The style of writing is a bit different from today.

Howdy, all! My name is Ju Won-sang, and I know how to write articles based entirely on the reporting of another journalist, without doing any on-the-ground interviews or research myself.

Does that make me a "qualified journalist," unlike the "unqualified frogs" I've written about? I should say so!

The best one yet was an ad published in Korean newspapers that reprinted a review published in a British newspaper. The ad highlighted a few positive words written about the car they were selling and grayed out the rest of the article, but not enough to hide the fact that what the reporter was emphasizing was not the quality of the car but rather his surprise that it wasn't horrible. The article started something like this, "If you drive a Daewoo, you probably don't want to tell you friends at the pub...".


The funniest thing about the "going to Japan" here is that the Le Monde and Jungang says the absolute opposite: in Le Monde article it is simply stated that they were dreaming of going to japan _but_ stayed in Korea for 4 years instead (so they are not dreaming to go to Japan after visiting Korea, yay great)


Funny how languages fuck things up.


(first comment, discovering your blog and loving it btw!)

Glad you're enjoying the blog! I think it's more nationalism and a journalist's desire for a sensationalist, attention-getting article that messes things up. But good catch on the differences in the articles. The media's reaction to the Le Monde story was certainly a harbinger of things to come...