In private foreign language classes, there are a lot of ‘fraud teachers’

Part 4: In private foreign language classes, there are a lot of ‘fraud teachers’

I've jumped ahead to part 4 for a particular reason. The Joongang Ilbo not only broke the story of the Le Monde article in Korea (on Independence Day, no less), five days later it carried things a step further, reporting on the problems of foreign language education and foreign teachers in Korea. The reason for skipping the third (chronological) installment (a Kyunghyang Shinmun article) is that today is the fifth anniversary of the Joongang Ilbo - then the largest online paper - reporting on Korean netizens' anger at a site called 'English Spectrum,' which preceded a great deal of negative media attention being paid to womanizing and Korea-denigrating foreign English teachers, as well as the formation of Anti-English Spectrum.

In the Joongang Ilbo on August 20, 1984, on page 6 under 'education' was the following article by reporter Yang Jae-bong. Many thanks to Song Joosub, David Carruth and Benjamin Wagner for help with the translation.

In private foreign language classes, there are a lot of ‘fraud teachers’
If they’re foreign, even ‘Gypsies’ are employed.
“Irresponsibility of those unqualified” …
Conversation education reverses 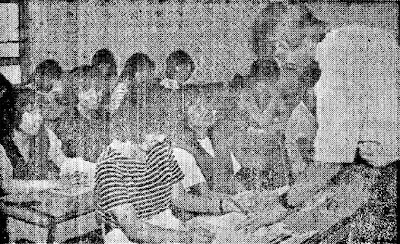 Photo caption:
In some private foreign language schools the employment of unqualified foreign teachers is turning conversation education into an educational ill. (The photo is not related to anything specific in the article.)
___

Unqualified foreign teachers - their (stated) purpose of entry is not education, as they enter the country without visas as either tourists or family of the U.S. 8th Army, and also as wandering drifters and are simply "people who speak a particular language as their native language (Native Speaker)" and are posing as foreign language teachers.

Whether in the name of respectable employment at private schools or private tutoring, people teaching without an Educational Visa (Teaching Visa 7-12) are creating the educational ill of irresponsible conversation education.

Seoul’s Jongno and Sejongno areas have become concentrated on so-called "American Conversation", which appears on the signs of private schools. Most are less than ten pyeong (33 square meters) and fit an office and classrooms into that narrow space. These private schools are reported to be ignoring private hagwon regulations that should be followed for direct lessons, and are hiring wandering unqualified foreign teachers as they please. One private school participant said, "If they’re a foreigner with a clean cut face, then they’re hired."

The vagabond foreign teacher’s main place of lodging has become the yeogwan (inn). Mr. Kim (45), who has owned ‘D Yeogwan’ (Seoul, Naesu-dong), which wandering foreigners have found and enjoyed, for seven years, said, “If foreigners here are low on rent money, they go out and make money by gathering university students and teaching them conversation.

K, an American who has come to South Korea twice, said, "Koreans are unconditionally kind to foreigners. There are many people like me who make money from teaching conversation, "he said. The average monthly salary is about 1 million won.

English conversation learner Lee (21, K University 2nd year) is "suspicious of their professional or academic background, and as they teach living English we’re dragged back and forth to places like bars to learn for a few days and then it’s cut off.” Among university students, those who learn so-called "Living English" and "American conversation" pay over ₩ 50,000 per month to take expensive classes and students even study in foreign apartments.

In Seoul’s Itaewon, Hannam-dong and Namsan areas in foreign apartments some US army servicemen with permission for off base housing openly have English conversation lessons.

In some cases, those with a single-minded focus on learning conversation have gone astray. Mr. Park (30), an office worker who studied English conversation at ‘E’ institute in Jongno said, "There were widespread rumors that the English instructor had only a high school education and was notorious as a playboy," and "There were always female students around him.”

In international information-oriented society, the great excitement for foreign language is desirable. But to disregard national pride simply for the purpose of learning a foreign language goes too far.

Education must be open to all those who want it but the qualifications of teachers must be strictly regulated. Just as every Korean person cannot teach Korean, not every foreigner can work as a foreign language instructor.

Education officials are pushing for measures to tackle the unhealthy obsession with foreign language conversation classes, which is dragging foreign language education in the wrong direction. It is their position that indiscriminate interest in foreign languages should be dampened and the rapidly-multiplying private institutes should be protected and fostered as an important link in the chain of social education.

Obviously, this article was a bit ahead of its time...
Posted by matt at 7:12 AM

Interesting Article. It does raise a valid concern about qualifications of Teachers in general and of Foreign Teachers in particular.

The issue is real and its not a slam or racist thing for the Korean paper to say so.

When it comes to private lessons the problem more complex and more serious due to the complete absence of regulation.

Anon2 - Your use of the present tense confuses me a bit.

Anon 2 - The problem with "private lessons" is much more complex because in most situations, they are illegal. Regulation and "illegally private" seldom go hand in hand.

I just find it problematic that after nearly 30 years of complaining about "unqualified" foreign teachers, there's been no attempt to define what it means.

In this article, for example, what is it that makes theses teachers unqualified? Is it that:

C) they are "wandering drifters" (Is there even a visa for this? Wouldn't this just be A: tourist visas?); or

D) they are "simply 'people who speak a particular language as their native language (Native Speaker)'"?

Or is it simply because they don't have what this article calls a 7-12 teaching visa?

What are the valid points and concerns?

Finally, how is calling people "gypsies" and "vagabonds" or saying some teacher is a "playboy" not a slam?

And what does this mean:

What is "unhealthy"? What the "wrong direction"? What is an "indiscriminate interest in foreign languages"?

You make valid points about the slams in the article. Better language should have been used.