A Hooch Is Not a Home

That's the title of this Time Magazine article from October 16, 1964:

Every evening in Seoul they gather under the street lights for the shape-up: smartly dressed girls in spike heels and hopeful smiles. In the fading light, American soldiers cruise by to inspect the merchandise, pinching buttocks and tilting faces toward the light. The girls, who are known scornfully as "mooses," giggle timidly and plead: "Come on to my hooch."* But a hooch, as every G.I. in Korea knows, is not a home. More often than not, it is a roach-ridden room in a crumbling old house.

Last week, not for the first time since U.S. servicemen arrived in Korea 19 years ago, the Korean mooses came under fire. In a letter distributed to 12,000 Lutheran pastors throughout the U.S., the director of an American service center in Seoul denounced "the age-old dangers of women and liquor" and concluded that "our young men aren't spiritually and morally ready for Korea." The Rev. Ernst W. Karsten, a mild-mannered Iowan of 59, charged that about 90% of the G.I.s in Korea consort with prostitutes regularly. "Many men have their steadies," Karsten reported. "Some of them 'own' their girls, complete with hooch and furniture. Before leaving Korea they sell the package to a man who is just coming in."

Pillow Fees. Pastor Karsten had his facts entirely straight. Every major U.S. military installation in South Korea is ringed by villages occupied by camp followers who make their living on G.I. largesse. As one inhabitant of a "G.I. town" put it: "We benefit much from the G.I.s stationed here, but thank God they are not Christians. If they were, we would starve."

Korean mistresses—some of them pretty, college-educated girls between 17 and 25 who can find no other jobs—can be established in a hooch for about $150 a month, not counting food. Though this is more than a private's monthly pay, an enterprising G.I. can make up the difference by playing the black market. In some small towns, girls have organized to establish minimum rates. Groups like the Rose Association and the Reconstruction Association have instituted "pillow fees" ranging from $100 to $200 a month. But cash is not as important as PX privileges. Simply by reporting a readiness to get married, a G.I. can provide his moose with cigarettes, radios and cameras, all of which are resalable on the black market for several times their original cost.

Key Money. Under an arrangement known as chunse (deposit), a G.I. can occupy an entire house off base merely by depositing "key money." No rent is necessary because the Korean owner is delighted to get the working capital, which he then invests in the black market. He can double or even treble his investment in six months. The G.I. gets his "key money" back at the end of his tour by selling the hooch, complete with furniture and moose, to an incoming soldier. Prices currently range from $200 to $300.

Pastor Karsten himself admits that it is difficult for military commanders to correct the situation. General Hamilton H. Howze, commander of U.S. and United Nations forces in Korea, has pledged not to tolerate "improper conduct." He hopes to "dispel the notion that a tour in Korea represents an undesirable lost year, which can be made palatable only by hard drinking and promiscuity." Still, by U.S. Army standards, Korea is a hardship post, and it would hardly be possible to restrict all troops to barracks or declare whole cities off limits.

General Howze has launched a partially successful "Character Guidance" program since he assumed the post last year (compulsory attendance: one hour a month), and the Armed Forces Radio carries a daily half-hour program, called Date with Diana, aimed at soothing homesick G.I. hearts with music and messages from the States. More soldiers are taking out their excess energy on such projects as building orphanages for Korean waifs, teaching English in local schools and playing softball.

*Moose is a corruption of the Japanese musume (girl), while hooch derives from uchi (house).

In response to this article, James Wade, in his book One Man's Korea, wrote the following: 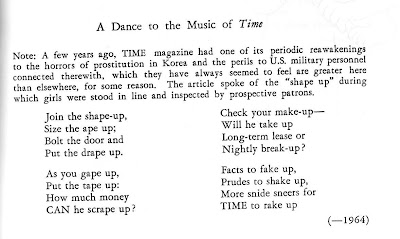 There were also some letters in response to the Time article in its next issue:

Sir: Granted that a Korean hooch was not a home [Oct. 16], it was the closest thing to home in contrast to the cold barracks 60 miles north of Seoul. Besides, I would take one moose any time in exchange for five U.S.O. dolls.

Sir: Being an ex-G.I. who served 19 months in Korea, I had to undergo an interrogation from my wife after she read your hooch story. The Rev. Ernst W. Karsten's charge is an exaggeration.

There were also other responses to this Time article, but I'll save them for another time.
Posted by matt at 10:02 AM

Matt, you're stealing my schtick!

But this was a good one. Keep digging these up.