[Update: Apparently the 100,000 bill design with Kim Ku on the front has been shelved, due to the Blue House's dislike for 'commies'.] 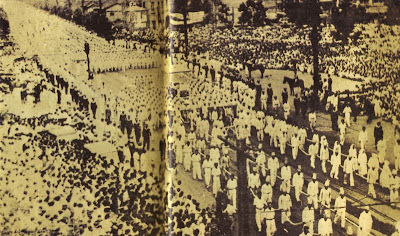 I found this Time Magazine article to be rather interesting:

Jail, exile, violence and intrigue had been part & parcel of Kim Koo's life for more than half a century. At 19, he killed a Japanese policeman in Korea, served several years in prison. Later Kim Koo went into exile in China, further enhanced his reputation both as an intense Korean nationalist and ruthless political terrorist: To friend & foe alike, he became known as "The Tiger."

Kim Koo was a Rightist, but he soon broke with Rightist President Syngman Rhee. Kim made a bitter fight against establishment of the U.S.-sponsored South Korean Republic, which he felt would permanently divide his homeland.

One day last week, the tired, 73-year-old terrorist was resting alone in a second-floor bedroom of his house in Seoul. Shortly after noon, a young Korean army lieutenant, known to the police who guarded the "Tiger's" home dropped in for a visit. He talked with Kim Koo for about five minutes. Then he drew a .45-caliber automatic and fired six shots; four of them struck Kim Koo, who died almost instantly. Later, police reported that the lieutenant had slain Kim Koo to prevent him from using part of the Korean army "for his own purposes." [Emphasis added]

There are many more quotes - from more recent history books - describing Kim's career in this post over at Sperwer's Log, but this Time article is interesting because it's a contemporary source using the word 'terrorist.' More than a year ago, a foreign professor calling Kim a terrorist set off netizen reaction and media attention, though part of his point was that the definition of terrorism has changed since the mid twentieth century. Worth mentioning is that this is the man who will be on the new 100,000 won bill (as soon as they add Dokdo to the map on the back). 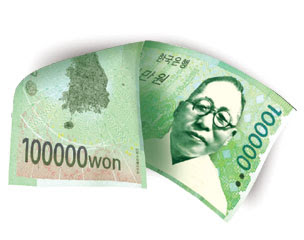 Personally, I'd choose someone like Sin Chae-ho, seeing how influential his writing and ideas were (as mentioned here). An essay titled "Shin Ch'ae-ho's Nationalism and Anarchism" can be found here.
Posted by matt at 8:07 PM

If it were up to me, it'd be Yi Sun-shin, and on the back a couple of turtle ships.

Not a bad choice at all, but Yi is already on the 100 won coin (and turtle ships are on the (very uncommon) 5 won coin.

It should be Tosan Ahn Changho, an inspirational patriot working toward Korean liberation and also not a murderer.

Kim Ku's archetypal portrait has him looking like a caricature of a Chinese waiter in a third-rate BBC farce. Tosan, on the other hand, looks statesman-like.

One of my students back in '04 who worked for the Korea National Bank said a survey had been conducted to determine the most popular national hero. He was sure the new 100,000 won note would be the first to feature a younger, female rebel, Yoo Kwon Soon.

Of all the people who could have been chosen in the 4000 year history, they chose someone who could arguably be called a terrorist and of all the images of Korea, they had to choose map that had to be "corrected" to include Dokdo. Who planned such a laughable concept?

Was there a public poll like the Elvis stamp, some committee, seriously had did one bill end up in two "scandals"?

My vote is for Yeongjo for the front and on the back a rice field or a Danwon work.

Damn, that's a badass choice. I always though the ROK would've had a much better start with Kim in power rather than Rhee.

That article sure sounds slanted against Kim. What it doesn't say about the Japanese policeman he killed is that the guy was most likely one of the rapists/torturters/assassins of Empress Myungseong. You say potato, I say rapist assassin.

It also fails to mention that Kim was the president of the Republic of Korea, at least the provisional government in China, and he himself declared war on Germany and Japan in December 1941.

In other words, he was a terrorist for our side.