I've been looking into the development of Banghwa-dong, where I live, for awhile now, but I've amassed so much information it's hard to know where to start. Banghwa-dong is in Gangseo-gu, and is located next to Gimpo Airport; Banghwa is also the last stop on subway Line 5. Its northern part is nestled between Gaehwasan and Chihyeonsan, which overlook the Han River to the north.

I'd taken a lot of photos over the past few years but one thing I'd never looked into much, even though I quite like them, was how to turn them into panoramic photos. Well, kudos to Lost Nomad, who mentioned a little program called ptgui, which I've been using to make panoramas out of dozens of older photos, as well as pushing me to great heights (literally) to try to capture the cityscape I call home by taking some new ones.

Here is the neighbourhood as cobbled together from Google Earth. A few landmarks as well as the vantage points for the following photos are marked on the map (in yellow and red). Like any photo here, it can be clicked on to enlarge it. 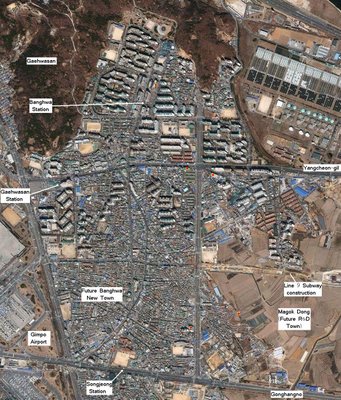 Banghwa-dong can essentially be divided into three sections: The area north of Yangcheon-gil, the street running across the northern part of the map, which was mostly a large planned development; and the middle and southern sections which lie south of this street, and which are divided obviously enough by a large street. The southern section is bounded to the south by Gonghangno, the wide street running to the airport. The middle section has seen quite a few new apartments scattered across it, but the southern section has remained untouched, as it will all be razed to make way for the Banghwa New Town. The main crossroads near the center of the map are where the following two photos were taken. The first pans from northwest to southeast:

In the foreground at left is an apartment complex dating from the late 198os (as many in the area do), while the taller (rebuilt) complex behind them is three years old. To the north of those, and including the large complex in the center of the photo, are the apartments completed in the mid 1990s, which were built on former farmland (these were finished in anticipation of the completion of subway Line 5). To the south of the street running away from the intersection at the center of the photo is a neighbourhood dating from (likely) the early 1980s. A great many 'pocket' developments (where an apartment complex is built amidst older housing) can be found there; beyond it is Magok-dong, the four square kilometers of fields which lie between Banghwa-dong and the rest of Seoul. Those fields resemble what the northern part of Banghwa-dong would have looked like 15 years ago.

Across the horizon are more examples of pocket development, with the visible apartment complexes dating from between 1993 and the present. More than a third of Banghwa-dong's 'middle section' has been replaced with apartment complexes. The area in the foreground on the left gives an idea of what the non-apartment complex dwellings generally look like, and how they are laid out (the area was based on farming roads, explaining the curved, non grid-like arrangement of the streets). The street running across the photo was only connected to Gonghangno, to the south (left) a few years ago (in an attempt to impose a grid on the area). The apartment building at far left can be seen on the right of the following photo, which looks east from the same vantage point as the photo above:

This apartment (the one on the right) was a hole in the ground when I first moved here, but quickly sprouted up to block out the view (it's interesting to look at my older photos and see what a different landscape was visible before). Now, this apartment complex can also be seen on the right hand side of the right hand photo below, while to its left is the apartment building which appeared in the center of the first wide panorama above (as seen below in the left hand photo).

The photo above on the right is a close-up of the one below, which was taken from about 700 meters to the south on the other side of the fields that make up the Magok-dong area. The line of construction running in front of the buildings is for the new subway line.

To the right of the apartment buildings a small mountain, Gungsan, can be seen, and behind it, Bukhansan. To the right of the mountain is Gayang-dong, which is full of apartment buildings also built around the same time as those in the northern part of Banghwa-dong. In front of Gungsan (a former Baekje-era fortress) is what was once the center of the area, Yangcheon; the elementary school there dates back to 1900.

I often go for bike rides around the Magok area, which is often a peaceful place (though you can still hear the traffic in the distance on Gonghangno). These fields, along with the two mountains to Banghwa-dong's north, make Banghwa a place where nature is less than a half hour's walk away. It's too bad that these fields will soon disappear to make way for the Magok research and development city. They've been on the chopping block since Kim Young-sam's presidency, and at this point the land has long since been bought up by the government. It'll likely be over a decade before it's all developed.

A more pressing development is the Banghwa New Town project, which is supposed to start this year. I've already shown before and after plans for the project, and below is a photo taken from the southeast corner of the new town area (about 300 meters west of the last photo's vantage point), panning from west to north showing the area to be developed (I nabbed the photos from here):

The 'peak' at the far left is the top of Gimpo Airport's international terminal (now mostly a shopping center), while the peak at center is Gaehwasan; Chihyeonsan is visible at right (it's currently having a tunnel bored through it to connect the (new) street at right to the Banghwa Bridge and the Gangbyeong expressway). At top right is an apartment building that should be familar by now. This photo should give an idea of the appearance of the area to be developed. There are numerous villas built across this area, as well as several low apartments dating to the early 1980s. There are also a lot of houses, and some of the owners I know aren't very pleased at having to move. Across the horizon in the distance are the newer apartment complexes; prior to their building in the early 1990s, most of Banghwa-dong looked like what we see in the foreground, or like the fields we saw above.

Above is a photo taken by my friend Matt in the area near Banghwa station, looking east (Gungsan is actually visible on the horizon, two kilometers away). What's interesting is that you can see Chihyeon Maeul (village), which was the town that once sat nestled between Chihyeonsan and the fields these apartments overtook. There's been a few pocket developments within the village, and I imagine the area will disappear over the next decade. Of course, once the new town is finished in 5 or so years, in that time even more 'pocket redevelopment' will have occurred, making most of Banghwa-dong unrecognizeable from how it looked in the early 1990s. Of course, there are many areas in Seoul which will be able to say the same, especially once the 25 new towns are finished (with 25 more to come, some of which will be massive). Another planned new town is in Sillim-dong, and Antti's post about visiting Sillim-dong and taking photos in the area to be redeveloped has convinced me of the need to do the same in southern Banghwa-dong before it's gone.
Posted by matt at 4:19 AM

Thanks for the pictures, I used to live in Kimpo so I know the area well. Do you know why there is a closed station at Magok? As there any plans to develop those fields?

Forget that, I missed the bit about Magok development the first time

Yeah, there are big plans for Magok. The station is there but not open. One of my adult students worked for the subway, and had to check the station every night for cracks. He also told me that two people have killed themselves there, and that it's a little spooky to be there by yourself. If I ever want to write a ghost story...

The new line 9 subway is being built through Magok now, as is the Incheon airport rail line - I'll post more on that later.