Maybe it's the economy, but I've noticed more and more restaurants, bars, and other stores in my area changing ownership in the past few months. The makkeoli place above appeared a few months ago (it's a franchise, and there are now three within a 15 minute walk of my house), while the 'Cool Hof' that used to be just down the street from it was replaced recently. Cool Hof had its charms, including a wooden statue of a disembodied sax player out front (I'll dig up a photo eventually), and an interior straight out of the '80s (according to a friend). It's dark interior has been replaced by the bright lights of the haejangguk restaurant below: 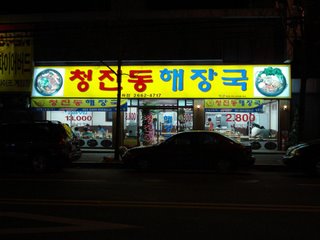 For those who may be curious as to what exactly 'Cheongjin-dong Haejangguk' is, this Joongang Ilbo article gives a lot of information about Haejangguk, giving us this helpful bit of information: "Haejang means to eat or drink something in the morning to relieve a hangover," and guk means soup, and it can be eaten at night after drinking or the next morning. As for what Cheongjin-dong Haejangguk is, we're given this description:

According to Choi Jun-yong, 38, a third-generation restaurateur, when Cheongjin-dong was at its peak in the 1970s and '80s, there were over 10 blood soup restaurants there. The area sees more customers in the early morning than late at night. Cheongjin-dong's haejang soup neighborhood was created in the late Joseon Dynasty. There was a market selling firewood nearby, and restaurants opened to serve the buyers and sellers. 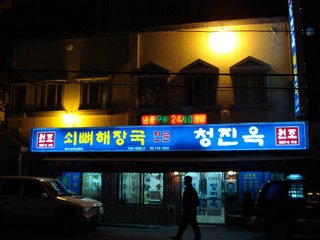 Above is a photo of Cheongjinok, where I tried some blood soup awhile ago. I can't say I was too fond of it, however. Part of the reason can be found in this paragraph:

To make the soup, ox bones are first boiled for 24 hours to make a stock, then rice, blood jelly, outer cabbage leaves, green onions and pig's intestines are added. The soup is usually served in an earthenware bowl.

I can't say I'm a big fan of intestines, or of congealed blood, so this particular haejangguk wasn't exactly to my liking. The article mentions several other kinds of haejangguk, however:

Goesan marsh snail soup: A refreshing green soup made of chewy snail meat.
Marsh snails are called olgaengi (marsh snail) in the Chungcheong provinces dialect. They are called godi in the Gyeongsang provinces and daseulgi in Seoul. The marsh snail lives in fresh water and usually hides under rocks.

I went hiking in Goesan awhile ago (I wrote about it here) , and tried this kind of soup in nearby Cheongcheon. As I said at the time (yes, I am lazy enough right now to quote myself): 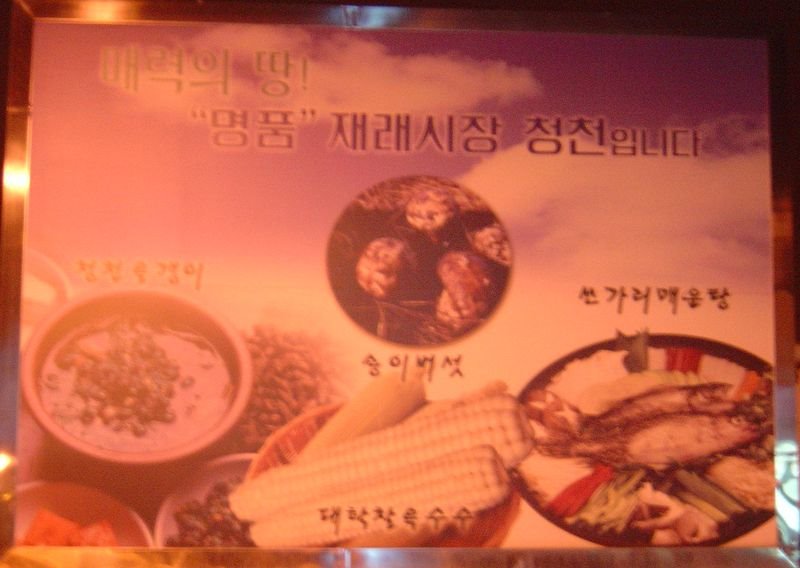 Just in case it sounds like I have a dislike for all things haejangguk, I can assure you I do not. One of my favourite foods in Korea is Byeodagui (뼈다귀) haejangguk, or as a friend likes to call it, 'neckbone soup'. There are four of these restaurants within a ten minute walk (of course, the best place is furthest away), and not a few long nights have ended lazing about on the warm ondol floor eating this hearty, mouth-watering soup. For the life of me, I can't understand why this wasn't mentioned in the article. 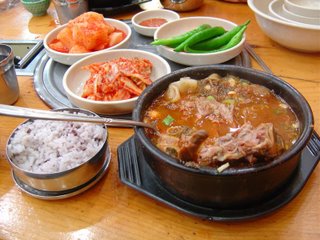 Something else worth mentioning about haejangguk restaurants is that they're open 24 hours, so they can be enjoyed at any time.

Since I'm on the topic of food, the best news of the month in that regard has been that a barbeque chicken place has opened nearby, and serves a yangnyeom (spicy) chicken dish that tastes exactly the same as the best chicken restaurant in Korea, a similar place near Bucheon station which I sometimes visit just to eat the chicken - and now I can get it two minutes from my house. 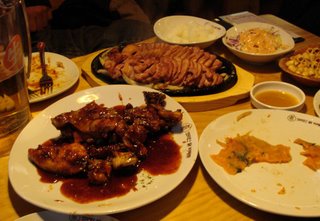 Yes, there it is, along with some smoked duck and complimentary (and tasty) gochu-jeon. Not meaning to quote LG's north american ad campaigns, but when you're sitting in front of this, Life's Good.


(Yes, there are posts coming about history, internet-fueled 'gusts', and urban redevelopment - I've just been busy)
Posted by matt at 2:58 AM

First time I was in Korea I was taken to a Hae Jan Guk joint... with a Korean friend..

who didn't tell me you weren't supposed to eat the whole chunk of congealed blood at once....

it was only the first time that Korean food actively tried to kill me. ;-)