To dream of beauty (and better English) 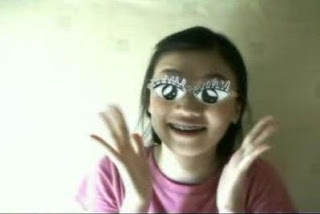 Still from "Michuhwanmong"
I walked into class earlier this week and asked one of my ten-year-old students why she had been absent the previous class. She told me she had gone to the dentist, but her classmate quickly added, "She cut her tongue". I asked her why and she told me it would help her speak English better, and insinuated that my Korean co-teacher had said it would help her pronounce 'S' better. This student has never had any noticeable problem pronouncing English words (it's her shyness that hampers her more than anything), so the fact her parents would do something so unnecessary left me shaking my head in disgust. Actually disgust was what I felt after I asked to see the result (she was pretty blase about the whole thing, saying it had only hurt for a day or two) and saw the stitches under her tongue. If (and only IF) you want an idea of how this looked, there's a screenshot from Park Jin-Pyo's short film "Tongue Tie", (which I mentioned here) that has documentary footage of a frenectomy (specifically, the tongue being stitched) here (it's not for the squeamish).

The LA Times article about this procedure (from 2002) can be found here:

Linguists sneer at the idea that South Koreans' tongues are too short to speak English properly, pointing to the unaccented speech of hundreds of thousands of Korean Americans.

"O.K., since Westerners are taller they might have longer tongues. But this operation lengthens the tongue by only a millimeter or two and that has nothing to do with it," said Lee Ho Young, a linguist at Seoul National University. [...]

Jung said the operation takes as little as 10 minutes and can be done as outpatient surgery with local anesthetic. It usually costs $230 to $400.

Actually, though I didn't ask, she responded to a classmate's comment saying that it cost 120,000 won. Who knew that dentists were doing it?

On the topic of plastic surgery, an article about plastic surgery in which women have their calves sliced to give them thinner legs can be found here.

Also on this topic, Gord over at Eclexys, when describing his girlfriend's (a nurse in training)
"feeling that anyone considering plastic surgery should be required to see a surgery, be present for one and really experience how gross it is to cut open a human body and fiddle with it", reveals an unpleasant fact about plastic surgery. Also related to this is an excellent post he wrote about the "kind of absolute horseshit that female interns have to deal with" within the medical culture here.

The Hankyoreh has a pertinent article on the topic of eyelid surgery and the concern girls have with their appearance:

A high school student, Yu Na-yeong, 18, shot an 18-minute drama called "Michuhwanmong" ahead of graduation. It is the story of a girl worrying over the fact that she has "single-lidded" eyes, or without a crease in the lids when she opens them fully. 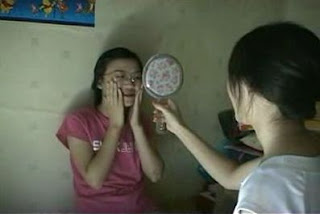 The film, loosely translated as "Dream of Beauty", can be seen here (it opens with 2 minutes of behind the scenes shots). The still above is from the film. The article continues:

Yu had watched the mainstream movie "200 Pound Beauty" with some of her friends. In the movie, an obese woman was reborn into a beauty after undergoing full-body plastic surgery. Then she managed to reconcile with the "past" and succeeded in work and love. About the movie, Yu commented, "The movie has received some favorable criticism that it does a good job of addressing the social problem of an appearances-first attitude, but I felt that it encouraged plastic surgery."

Worth mentioning is the fact, as related by Mark over at Korea Pop Wars, that "200 Pound Beauty is now officially the 10th-biggest Korean movie of all time, beating out JSA for the No. 10 spot."Almost 6 million people have seen the film, a poster for which is here, while the music video for Kim Ah-jung's cover of Blondie's 'Maria', (which has become pretty annoying due to its sudden ubiquity here) serves as a preview of the movie (here). At 6 million viewers, 12% of the population has watched a film that "encourages plastic surgery", according to a high school senior, who continues:

For young girls, plastic surgery is not extreme, said Yu. It is considered natural that teenage girls would undergo a surgery to obtain "double eyelids," she explained. "After taking the college entrance examination, many girls got plastic surgery, at least to get double eyelids. Teenage girls have a strong desire to overcome their appearance-related complexes, instead of valuing their individuality."

The Korean Womenlink, a women’s rights organization, conducted a survey of 1,648 South Korean female middle and high school students about how they evaluated their appearance. According to the survey, just one out of 10 respondents, or 13.7 percent, was satisfied with their appearance. About 43.6 percent, or 718 girls, were totally unhappy about theirs.

It's one thing for these girls to feel inadequate themselves; it's another when their parents project this onto their children, as they certainly do with the tongue operations, and which they must have done when I saw a ten-year-old student with bruised eyes who had just had eyelid surgery, something that made me feel pretty nauseous. And yet she treated it like a joke, saying, "Look into my eyyees" in an exaggerated voice and giggling. In response to my post about Gang Hye-jung's plastic surgery, Iceberg commented, "She used to be so pretty. Now she's just...ordinary." I think that hits the nail on the head. In Korea, plastic surgery-enhanced faces are ordinary, and getting plastic surgery is "considered natural." It's as Korean as kimchi, the four distinct seasons, cyber terror, and cakeboxes full of money.
Posted by matt at 3:00 AM

Cosmetic surgery performed on a consenting and aware adult is one thing -- frenectomy for the ostensible purpose of helping one speak English better is abominable. All the more so when committed upon a child.

Surely, there must be ethical physicians or physicians' associations that speak out against this awful practice.

I wonder if getting my tongue shortened will allow me to pronounce Korean 'sa' and 'ssa' better.

First time reading your blog and I just want to tell you what a great post that was. It's something we hear about all the time, but thanks for the collection of links and your vivid descriptions. Kudos.

I write for the Times Educational Supplement in the UK. I'd like your permission to reproduce some of your story on your pupil having tongue surgery. can you tell me more about it? Thanks. Michael Fitzpatrick
fitza@mac.com

My name is Kerren McKeeman, I am a Junior Editor for Cool Hunt, an editorial press agency based in Los Angeles.

I'm currently doing a project on Korean girls' beauty culture, more specifically, on the intentions and opinions behind cosmetic surgery and image-altering investments. The article will be published in China's version of SELF Magazine.

You all have some pretty interesting perspectives-- do you know anyone in Korea who would offer their side of the story? I would like to include several interviews in the article.

Anyone who would be willing to answer a few questions would be great. Please contact me at editorcoolhunt@gmail.com as soon as possible.

This should be a great opportunity to give Chinese readers some insight on the Korean craze for good looks!

omg the tongue surgery thingy freaks me out. what kind of parent would make their kids undergo the surgery?!! and i know that appearance is a big thing in this beauty/wealth obsessed society, but to view plastic surgery as a hair cut or wearing braces as they do in korea is just wrong. there is a big DIFFERENCE between cutting your skin vs. getting a hair cut or wearing braces!!!! HELLO. it just grosses me out! just be happy with who u are already!

If there is a doctor in this world that would perform an unnecessary surgical procedure (even a senseless mutilation like tongue surgery), South Korea is the place you would find him.