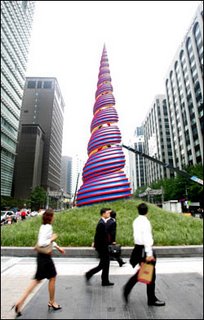 'Spring', from the Korea Times
It appears the sculpture recently unveiled at the 'source' of Cheonggyecheon (no, I don't mean the Han River) has caused some consternation amongst Seoul's citizens. It is titled "Spring", and designed by pop artists Claes Oldenburg and Coosje van Bruggen, who, according to the Korea Times,

were chosen for the $4 million sculpture last year by the former Seoul Mayor Lee Myung-bak with advice from the state-run Seoul Museum of Art. The artists were paid $600,000, and $3.4 million was spent on production, with the entire cost paid for by telecommunication conglomerate KT. The shiny spiral is made of more than 200 pieces of aluminum, but it can easily be mistaken for plastic. 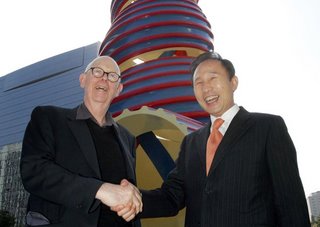 Claes Oldenburg and Lee Myung-bak, from the Joongang Ilbo

The article goes on to quote the opinions of many passersby, most of whom see the sculpture as an eyesore. Oldenburg and van Bruggen defend the sculpture, but not for the first time; back in February, when the project was announced, they were interviewed and responded to questions about the 'unfair' selection process, in which there was no competition, and the couple were chosen by the mayor on the advice of experts. Interesting to see that this piece attracted protests before it was even installed: 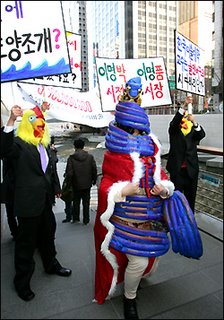 Performance of "Naked King and his fellows."

I think that one of the problems with the way in which it is being viewed is that the people who were interviewed didn't see it at night. It's garish colours and towering form make perfect sense when seen once the flashing neon has come out, as this photo of Cheonggyecheon taken near Dongdaemun makes clear (notice the garish, constantly changing, lights on the right bank). 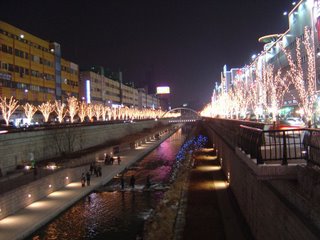 But any discussion of the aesthetic merits of the work has come too late for Korea’s Association of Visual Artists, which is protesting the project. Park Sam-chol, an art critic and spokesman for the association, originally raised the group’s objections in January, saying ``The biggest reason for our protest is that the government did not give any chance to the local art community, as well as Seoul residents, to openly discuss and exchange ideas on the public art of Chonggyechon.''

Poor artists. Poor citizens. I guess, not having the chance to discuss or exchange ideas about Cheonggyecheon, they now, as they're attacked by the garish colours of an eyesore invading public space in a central area of Seoul, might have some idea of what it was like for the merchants who used to line Cheonggyecheon when they were driven out by construction thugs and riot police. Except that an eyesore and actual bruises, contusions, and loss of livelihood don't really compare, do they? And as I've mentioned before, those vendors who used to sell their wares on Cheonggyecheon were just the first to get 'relocated'; those in the Sewoon Sangga and in the Samil Apartments will soon see their stores redeveloped. And those redevelopments are only the beginning, as the map I made below shows (and those below are just the redevelopments I'm aware of): 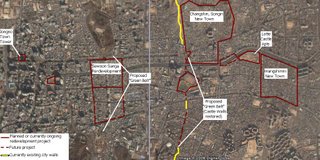 From this article from February, which documented the protests of local artists opposed to the sculpture and the selection protests:

"It looks like the empty shell of a black snail, which has been thrown out after someone ate the meat," said art critic Park Sam-cheol. "It's an anti-ecological shape. A live snail would lie horizontally. The work is standing. Unless someone is trying to express an acrobatic snail, it hardly says anything about the renewal of ecology in Seoul, which the restored river is supposed to symbolize."

Anyone who thinks that Cheonggyecheon represents the renewal of ecology really needs to get their heads examined. It represents a pleasant re-development project which was supposed to make the mayor look like a fast, can-do politician of the Park Chung-hee mold (without the authoritarian trappings, of course), a project which was supposed to conjure up the image of caring about the environment and history while bulldozing actual culture properties as they were in such a hurry to get it done, a project which is in fact a centerpiece of a rather large downtown redevelopment plan, as the map above makes clear - one which will give free rein to construction companies (not for nothing was SNU professor of environmental studies Yang Yoon Jae (the originator of the idea of redeveloping Cheonggyecheon) arrested for accepting bribes from developers to raise height restrictions in the downtown area when he was deputy mayor).

"Spring"s marsh snail shape is a natural form, but due to its construction out of aluminum and garish colours, is not really natural at all. How different is that from Cheonggyecheon itself? A former natural stream now coated in concrete and neon, fed by water pumped in from the Han River, isn't very natural either. "Spring" is, in the end, a perfect match for Cheonggyecheon.

Choi Jeong-hwa's yellow plastic pagoda behind Chongno Tower, just a block from Ch'onggyech'on in Chongno-2 ga, pioneered the local variation on the theme of using shiny kitsch to reflect and thereby take the piss on all the shiny kitsch invading downtown Seoul. Oldenburg and van Bruggen's 'Spring' is merely the latest hipster addition to this sly and very acid genre. You're one of the few and first who seems to actually get it! Too bad hardly anyone else does... Must be distracted by all the neon and faux-glitz to see clearly, eh?

I was re-reading your interview with Choi and this passage certainly caught my eye:

"My favorite places in Seoul are the street markets - Namdaemun, Dongdaemun, Chongno. I especially like Ch'ongyech'on, where I can get a "real" smell of humanity. We Koreans are proud of are street markets - that is, the ones that still remain."