Ok, my bad; I said back in December that I would edit the description of the streetcar map below, but I never got around to it. Here's what I wrote at the time:

I think the better caption would be “A map of the tram system in the 1930s”. I know I wrote “from” the 1930s, but I have to admit, there’s no proof of that, and considering the layout of the map (It does look more modern than the ’30s, don’t you think?) it may have been made at a later time. I’ll amend the post to reflect that (which would mean changing the preposition “from” to “in”). It may well be from that time, but it’s just as likely that it’s not, and I should have worded it more carefully.

A commenter here also suggests other reasons why it's a new map. Anyways, the change has been made; sorry it took so long. 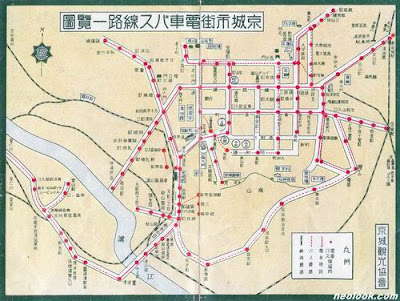 I just spent some time at home in Ontario, and managed to bring back a few books (and scan a lot of others, especially the Seoul City photo books on the history of Seoul, where this diagram came from): 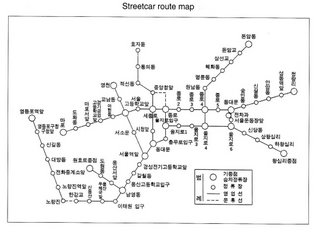 This is a map of the Seoul streetcar system in the 1930s (though not necessarily from the 1930s; it's from Seoul Under Japanese Aggression (1910 - 1945)) - a shiny nickle for those who spot the mistake! Upon seeing this, not only did I note the similarities in the Seoul streetcar network and the subway network in that area today, I also was reminded, in the diagramatic way it is laid out, of some of the situationist collages below, (taken from The Situationist City): 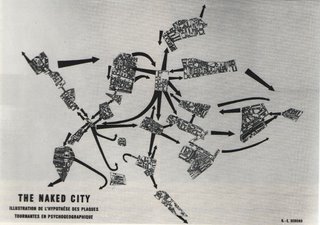 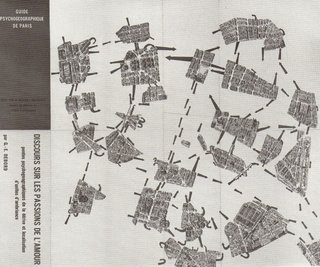 All cities are geological; you cannot take three steps without encountering ghosts bearing all the prestige of their legends. We move within a closed landscape whose landmarks constantly draw us toward the past. Certain shifting angles, certain receding perspectives, allow us to glimpse original conceptions of space, but this vision remains fragmentary. - Ivan Chtcheglov

Some of the early situationist texts on urbanism can be found here:

One reason for mentioning these texts is to give an idea as to where Flying City, a Seoul-based urbanism research group, got some of its ideas (in fact, the photo on the introductory page linked to above is very influenced by the style of the 1959 book Memoires, by Guy Debord and Asger Jorn). Antti has linked to Flying City on several occasions, and one of their panoramic photographs graces the top of his blog. Upon glancing through The Situationist City, I was reminded of them; a description of some of their work and background can be found here.

Speaking of Seoul's redevelopment, a friend who was studying the Wangshimni new town development here for several months this summer sent me a link to an essay titled The Nature of Seoul's Modern Urban Development During the 18th and 19th Centuries, by Yi Tae-jin. I haven't had a chance to read it all yet, but it looks rather interesting.

Also regarding redevelopment in Seoul, I've been looking at the history of Banghwa-dong, where I live in Seoul's west end. Here is a quick map I made using a google satellite map of the area (which is not a close-up map, unfortunately). The dates refer to the completion of the developments. A quick look at it should make clear that by, say, 2012, when the Banghwa new town is to be finished, most of Banghwa-dong will be completely unrecognizable compared to the way it looked back in 1990. 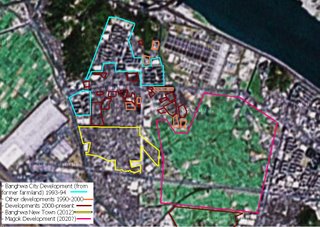 I'll post more on Banghwa-dong at some point, so I guess this is just the 'teaser' map.

Oh, and having had only a 28 kbps internet connection for the last week and a half (and an aversion to tv), I hadn't really been keeping up on the news, so the news about the nuclear test was just great to hear when I returned early yesterday morning. Hopefully, if a nuclear strike ever hits Seoul, it will vaporize the taxi driver with the rigged meter who drove me home. (I'm just joking. Obviously, I hope he dies a slow death from radiation poisoning).

On that note, it's time for another 2 or 3 hours of sleep. Bloody jet lag.

In the wake of North Korea's first successful nuclear test, The Washington Post's PostGlobal and Oxford International Review are sponsoring exclusive blog responses to a question posed by former South Korean President and Nobel Peace Prize laureate Kim Dae-Jung:
Why do you think the current US Administration has refused direct negotiations with North Korea, despite North Korea's proposal to do so?

OIR posed this question to a panel of students from the United States and Asia gathered at Hong Kong University to participate in the Asia Institute for Political Economy, a program conducted by The Fund for American Studies. Click here to read their commentary, in light of recent events: http://blog.washingtonpost.com/postglobal/debate/korea/

Because of your interest in the region, you are invited to join the conversation and pose questions to our panel. OIR and PostGlobal would love your input.
http://www.oir.org.uk
blog.washingtonpost.com/postglobal

The mistake on the map? Namdaemun is marked as "Dongdaemun." Also, the Seodaemun station (at the junction of the lines to Mapo and Yeongcheon) is shown but not named.

Thanks for this post...I've been studying the Seoul streetcar system for years. The uncanny similarity between the old streetcar routes and the downtown subway lines has struck me, too. In actual fact, the subway system was originally planned as a high-capacity replacement for the streetcars. The last streetcars stopped running in 1969, and the Cheongnyangni-Seoul Station section of Line 1 opened in 1974.

With the time and resources, I'd even consider writing a book on the subject, though I suppose it'd have to be in Korea if I ever hoped to make a profit on it! Well, I guess that's what blogs are for. I should get started on it!

By the way, here's another streetcar line map that despite its much older appearance, actually dates from around the same time—except that it's in Hancha:

Anyhow, thanks for the artwork and links...I am definitely going to check those out. I have an artistic bent, but I especially dig that postwar, modernist, graphically influenced stuff such as you showed on this post.

The book would have to be in Korean (though it would probably also have to be published in Korea).

It'd be interesting to consider the appearances of the streetcars in films and books. I remember in Chae Man-sik's "Peace Under Heaven", set in the 30s, the main character, a fat, rich yangban who's aiming to deflower a 14 year-old kisaeng, buys a lower fare ticket in order to cheat the system when he goes to meet her (should I mention she's also dating his young grandson? It's a great book).

Can't remember seeing it in the ten or so older movies I have; I'll have to keep my eyes peeled next time I watch them.

And yeah, can't imagine the english-language market for books on Seoul's streetcars to be that large...