On this 61st anniversary of Korean independence, I couldn't help but remember this postcard published on the first anniversary in 1946: 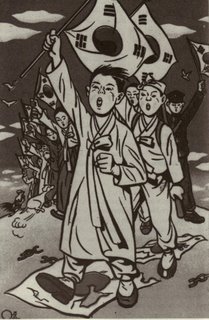 This photo was taken in early 2005, and features a repeat performance of the image above, this time by Korean lawmakers protesting a prefecture in Japan declaring that Takeshima/Dokdo belongs to it: 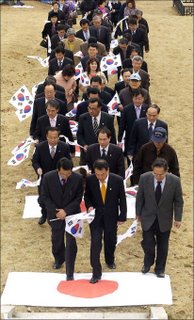 Is it possible that the 'protest' seen in the second photo is in fact inspired by the image in the first photo? For people to be doing this in 2005 seems a little odd, but if it was inspired by an older form of 'protest', it might help explain it a little (though not excuse it). What was perfectly understandable in 1946 is not so wise to carry out in the present day, 60 years later.
Posted by matt at 5:16 PM

Actually the big difference between the two pictures is that the guys in the first one are much cooler and not wearing standard-issue Korean assembly member charcoal-grey suits.

By the way, I've personally got nothing against stamping all over flags as long as it's done in an even-handed way. Waving one while treading on the other is just not on. ^^

It may not be on, but it is at least proof that multi-tasking is a decades-old practice in Korea; maybe this is just Korea's version of rubbing your belly while patting your head.