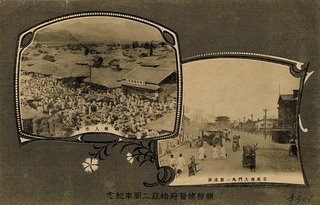 Celebrating 2 years of Japanese Administration
Look at the Improvements!
A you may have noticed in my last post, I quoted several times from the book (provided by Google Books) Times Past in Korea: An Illustrated Collection of Encounters, Customs and Daily Life Recorded by Foreign Visitors. By looking though the table of contents, it's easy to find lots of interesting entries from over the years. I found the two below to be rather fascinating. From the 1907 Welcome Society's A Guide Book for Tourists in Japan, under the heading "From Japan to Korea", comes this entry:

The Sanyo Railway's new steam-ship service between Shimonoseki and Fusan affords considerable convenience to intending travellers to Korea. The new relation which Korea has to Japan, makes it entirely necessary that the time taken in a journey from Tokyo to Seoul must be decreased as much as possible. Before the Russo-Japanese campaign, travellers had to reach Chemulpo by steamer via Nagasaki, and it always took five days even if the connection was accomplished. At the present time, however, the journey can be finished in about fifty hours. From Tokyo to Shimonoseki via Kobe has already been described. From Shimonoseki to Fusan is 122 m., and travellers may be conveyed by means of the commodious and luxurious new steamers of the Sanyo Railway, the passage taking about ten hours (with foreign food: Ist 12.00 ; 2nd 7.00). The scenery is panoramic and charming. Travellers cross the famous Tsushima Straits on the Japan Sea where the greatest naval battle of modern times was fought with the utmost determinaton on the 27th and 28th of May 1905, the whole of our Fleet participating in the engagement, and in which the enemy made use of his entire force. The contest was most severe, quite unprecedented in naval history, and at length resulted in the annihilation of the enemy's fleet practically decided and the termination of the great war.

Korea possesses an agreeable and healthy climate. The winter is dry and pleasant and sport for hunters is unrivalled. Besides tiger hunting in the interior one can find an abundance of ducks, geese, pheasant, hare, snipe, and deer about Seoul and its neighborhood. 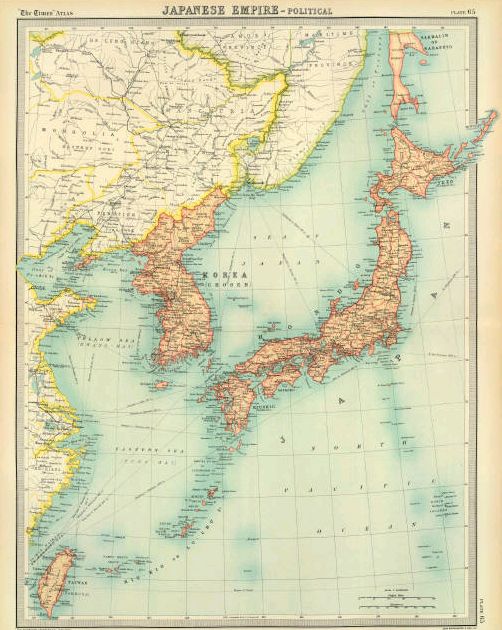 Twenty one years later, in 1928, Terry's Guide to the Japanese Empire provided this information for those planning on travelling to Seoul:

SEOUL (KEIJO) AND ITS ENVIRONS

Taxis ply for hire. The usual charge to the hotel (5 min,) is 50 sen. If there is any question about it, submit the matter to the hotel manager.

Motor-car rates by the hour about 6 yen. Special rates for country trips. The hotel-cars usually are kept in the best condition. Rates the same as others.

Jinrikis ply for hire at from 70 sen to one yen the hour. Consult the hotel manager.

Tramcars run to many parts of the city and suburbs. Cheap and useful.
Hotels. *Chosen Hotel (Tel. add. Choho, Keijo). Best in the city. Reccomended. Modern, fire- and earthquake-proof. Member of the Japan Hotel Association. Many comforts and modern conveniences. Telephones, radio, moving pictures, good food, and service. English spoken. The manager, Mr. J. Sakai, is well known for his ability to please foreign guests. Consult him about sight-seeing plans.

Seoul (pron. sowl, or sow-ohl) or Keijo (kay-jo), a one time walled city with a population (Japanese, Koreans, Mongols, etc) of approx. 302,000, stands on the N. side (2 M. distant) of the swift Han River (120 ft. above it and 35 M. from its mouth), in the heart (Kyongkwi Province) of the ancient kingdom of Korea (lat. 37 35' N., and long. 127 0' E. from Greenwich), is one of the most picturesque and romantically situated mediaeval capitals of Eastern Asia. It was founded in (in 1392) by the Emperor Yi Taijo under the name of Han yang ('Fortress on the Han'), but it is generally known as Seoul ('capital'), the Japanese equivalent for which is Keijo. As the political, intellectual, educational, and commercial center of the country, with (so-called) palaces, art, and museums, libraries, botanical and zoological gardens, colleges, banks, electric lights, street cars, and telephones, and many additional adjuncts of a modern and progressive metropolis, it is Korea to most foreigners, since it represents in the large everything Korean; much as Tokyo represents N. Japan. For upward 8 centuries it was home of the concubine- loving Korean sovereigns, and few cities have seen more maladministration, cruelty, rioting, and bloodshed. For almost that length of time it was a sort of cancerous growth that choked the national ambition and sapped the life-blood of the people - a poisonous blight on all progress and civilization. To-day it is the center whence all benefits and reforms radiate. The japanese Governor-general dwells here, and from the Residency the affairs of the nation are administered. The situation of the old capital (2 M. by 2 M.), in a broad valley (5 M. long by 3 broad) surrounded by rugged hills that tower in somber grandeur above it, is very attractive. From the highest of these (N.) hills, the San-kak-san, or Three-peaked Mountain (2,270 ft.), - which foreigners know as Cock's Comb, - one may enjoy a magnificent panorama of the wide city with its mushroom-like houses and the lordly Han flowing broadly to the sea.[...] The tall mountain to the S. of the capital long served as a signal station on which bonfire messages were received from the southern provinces. 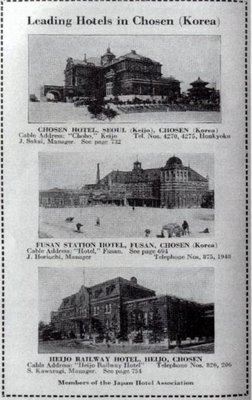 One has to wonder in reading these just how much European imperial powers advertised their colonial possessions for the purpose of travelling. While these guides certainly arouse historical curiosity (tiger hunting?!), they actually sound rather contemporary; I guess travellers' needs never really change. Beyond the necessities, they also require souveniers like postcards. Numerous postcards from Korea during the colonial period can be found on these pages (1, 2, 3, 4); it's interesting to see the image of Korea that these postcards attempt to convey. Beyond the travelling aspect of these books, they are also interesting for the way in which they carefully position Korea within the Japanese empire in a very benign manner, even if it may not seem very subtle. They certainly build up Japan's national esteem by embellishing the battle of Tsushima, describing it as "the greatest naval battle of modern times", "quite unprecedented in naval history", which "resulted in the annihilation of the enemy's fleet". The best description of Korea, and of its need for Japanese guidance (nice to see Terry's Guide was so willing to accomodate this) really needs to be quoted in full once again, so beautifully wrought it is:

For upward 8 centuries it was home of the concubine- loving Korean sovereigns, and few cities have seen more maladministration, cruelty, rioting, and bloodshed. For almost that length of time it was a sort of cancerous growth that choked the national ambition and sapped the life-blood of the people - a poisonous blight on all progress and civilization. To-day it is the center whence all benefits and reforms radiate. The japanese Governor-general dwells here, and from the Residency the affairs of the nation are administered.

No subtlety here - my head is still ringing from the sledgehammer blows. It seems rather telling that, even 18 years after Japanese colonial rule in Korea began, they still felt compelled to justify it at every turn. Coercion and the threat of violence for the natives, pretty words for the foreign tourists - my how things have changed.

Or at least, that's how we might first think, as we look at this obvious propaganda (and propaganda techniques of old tend to seem fairly obvious to us now, we like to think). Beyond the obvious justifications for empire, and the boosting of its military esteem through exaggeration, however, it's interesting to see how, three years before Korea was annexed outright, the 1907 travel book is already speaking of the need for speed between the two countries and describing in a mundane manner the ways in which one can travel in comfort between Tokyo and Seoul. I would argue that the bombast of the description of the Battle of Tsushima in fact draws your attention away from the mundane way in which this new, faster connection between the two countries is described: "travellers may be conveyed by means of the commodious and luxurious new steamers of the Sanyo Railway, the passage taking about ten hours (with foreign food: Ist 12.00 ; 2nd 7.00). The scenery is panoramic and charming." Yawn. But it's precisely that description which makes our eyes glaze over and turn the page which is insinuating that Korea should be more closely within Japan's reach, normalizing a "new relation which Korea has to Japan".

And this is the fun I have with two documents. Think of the fun I could have reading these.


A final note: When I read the above paragraph, with its descriptions like "cancerous growth", "poisonous blight", "choked the national ambition", etc., etc., I couldn't help but think of present day justifications for Japanese colonial rule rendered into English, and how they pale in comparison to descriptions like the one above. My advice to those writing in English trying to justify the Japanese colonial project over 60 years after it ended is to stop searching through Japanese language revisionist sites and translating them into English (which in the past has inspired flat, uninteresting, and unconvincing writing such as this), and instead look at what was being written by Japanese or on Japan's behalf in English during the colonial period. The writing at that time was simply much more descriptive and fun to read. They also stand a better chance of convincing people that the stream of words appearing on their webpages actually have depth if they can get their readers to focus on the bright and flowery surface of the language they use, as this may postpone the realization that the stream is, in fact, rather shallow.
Posted by matt at 8:58 AM

Its not related with the topic but as a Korean History enthusiast you might enjoy this:

Even in Korea, there is a "revisionism" movement by some Korean intellectuals. Though they are often attacked by nationalistic Koreans who have never been taught to think or to appreciate another point of view..

where did you find these sources??? i'd love to find out for my own research purposes... thanks!!