As Lost Nomad has discontinued his popular "Girl Wednesday" posts, I thought I'd pick up the pace with a one-off "Girl Saturday" post, with a slight twist, of course. 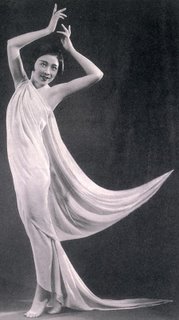 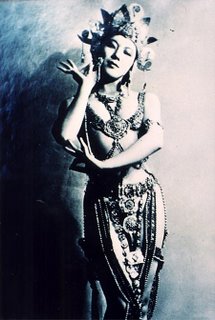 Choi was born in 1911 in Seoul when the Korean Peninsula was under Japanese colonial rule. She came to Japan when she was 15 and started her artistic career under the tutelage of avant-garde dancer Baku Ishii. She incorporated traditional Korean dances into her creation of modern dancing and captured the hearts of many people[...]

Her dancing included slow finger movements, symbolic signs, and quiet smiles that hovered around her mouth. She won great admiration for her dance portraying a Buddhist saint standing on a lotus flower. Critics gave her unreserved praise for her dancing form calling it a ''perfect formative sculpture.''

Choi performed before a full house every day during her 20-day wartime appearance at Tokyo's Imperial Theater in 1944, although she had been branded as ''anti-Japanese'' following her successful performance tour of Europe and the United States before the war. 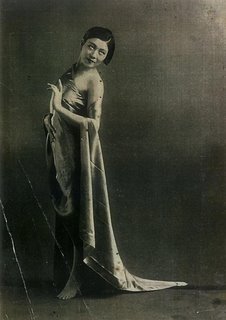 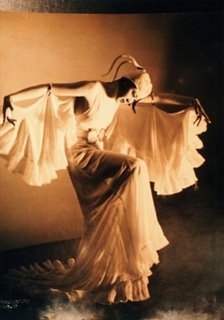 Photos like the one below remind me of ones you mind find while doing a search on naver or daum, of celebrities chillin' with their friends. 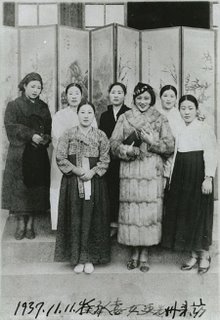 And much like the present day photos you might find of celebrities hanging out together, the photo below shows Choi meeting Son Gi-jeong in 1936, the year he won a gold medal for Japan for his victory in the marathon at the 1936 Berlin olympics. 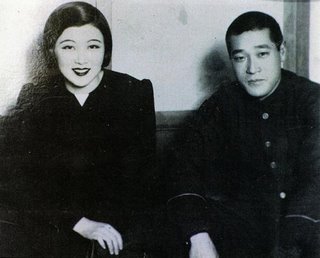 Meeting celebrities of the day, being toasted in Japan and Korea, travelling the world... it might sound like an enviable life. However...

She was forced to dance for Japanese Imperial Army soldiers in Korea during the war, and after the war, when she returned to Seoul, she was boycotted as ''pro-Japanese.'' She crossed the 38th parallel and went to North Korea in 1946. Choi established a dancing research institute in Pyongyang and served as a member of the Supreme People's Assembly. 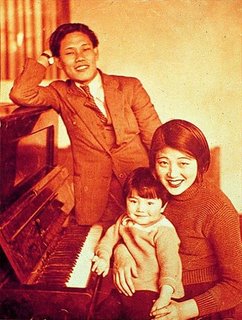 Above is a photo of her with her husband and daughter in the 1940s. Her high position was not destined to last however...

She lost her seat in disgrace when her husband, a senior government official, fell under suspicion of being a U.S. spy. She was last heard of in 1967 when her family was reported to have been put under house arrest.

The report I'm quoting from exists because in early 2003 Choi Seung-hui was rehabilitated.

Choi's grave was set up in the Revolutionary Martyrs Cemetery on Feb. 5. Her remains were transferred there from another grave after Kim Jong Il visited the cemetery in January and asked why her grave was not there. Kim ordered a biography on Choi [which is rather silent about her death] to be published and her remains to be transferred to the Revolutionary Martyrs Cemetery.

A possible reason for her rehabilitation is offered in the first article:

A contingent of more than 200 members of Pyongyang's Mansudae dance troupe arrived in Japan in 1973 and people in Japanese dance circles were attracted by a dancer who performed with a traditional Korean musical instrument. One of them said of her, ''She towered over all others in technique and beauty. It was obvious that Choi had an influence in her graceful movement.'' The dancer's name was Go Yong Ki, who later became the wife of North Korean leader Kim Jong Il, and bore him a son, Kim Jong Chol. Choi's rehabilitation may not be unconnected with her relationship with Go.

Luckily, since she's now in the Revolutionary Martyrs Cemetery, her story now has a happy ending.