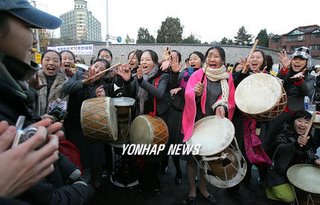 As I mentioned last night, I saw a group of girls sitting outside the front gate of the local high school, planning to stay all night and greet the test takers in the morning. The Korea Herald described the outcome of the scene I saw (as does the above photo) :

Many students arrived in the early morning to be cheered on by fellow schoolmates. [...] "I came here at 3 a.m., but many sophomores from my school came during lunch time on Tuesday, reserved their territory with green tape on the ground and stayed over night to hold the best spot for cheering," Kim A-ra, freshman at Baiwha Girls' High School, said. "It is very cold, but it's a great feeling to cheer the seniors and wish them high scores."

Yonhap was nice enough to take lots of pictures of students gathered outside a high school (it almost looks like a protest, doesn't it?), cheering on the test-takers and wishing them high scores, as well as photos of police escorting late students to the test ('over 10,000 police were stationed near exam venues and subway stations throughout the country to help students get to the venues on time').

I'm not sure if there were any reporters getting shots like this in Kwangju, as they all seemed to be waiting to get photos of "the nation's little sister", Moon Geun-young. One has to wonder where she finds the time to study, considering how much modelling and acting she must do.

Back to that Herald article.From it I learned something I hadn't known, namely that testing began at 8:40 a.m. and ended at 6:15 p.m. That's... a long time to take a test. Just thinking about having to write a test for that long seems stressful. I haven't mentioned the title of the Herald article yet: "Student kills himself ahead of college entrance exam". Needless to say, the alliterative associations one draws on this day are suneung, stress, and suicide, and all have come to pass today:

As students prepared to sit the national university entrance exam yesterday, a 19-year-old high school graduate, who was due to take the test for the second time, committed suicide in Seoul at around 6. a.m., police said.

"His parents found his body on the ground after he jumped off the 16th floor of his apartment building," a policeman at Seoul Bukbu Police Station said. "We're considering it as a suicide case due to his parents' testimony that Lim was under high pressure because of the exam."

Should I mention that next to the above paragraphs on the website there was an ad for an apartment complex complete with photos of tall apartment blocks? Perhaps not, but it unintentionally provided a visual aid to a rather grim, if predictable, article.

As you might tell from the many pictures linked to above (if you scroll down on each picture page there are more), every Korean media outlet reported on the 수능 today. While online Korean language papers like the Chosun Ilbo have literally dozens of articles, the English language press have managed to print one or two pertinent articles.

The Donga Ilbo posted an article titled "CSAT Preparation for Disabled Students", and kudos to them for reporting on a subject (in English) which often gets little press - in any country. The article looks at students with cerebral palsy, and informs us that it was only 3 years ago that people with such disabilities were allowed to take the entrance exam.

The enthusiasm and expectation for the class is higher than expected. In 2002, the first year the special admission was implemented, 15 students took the test and 10 of them succeeded in entering universities. In 2003, nine out of 15, and last year, 2004, all 14 students were admitted to universities.

Photos of some of these students arriving for the test today can be found here and here.

The Korea Times posted an article titled "Foreigners Taste Unique Culture in College Entrance Exam Here" (foreigners are not once mentioned in the article), which gives an overview of test day and different traditions which revolve around it (like parental visits to temples and affixing yeot (taffy) to the school gate where tests are being written). The accompanying photo shows students being checked with a metal detector, which is better described in a Joongang Ilbo article: 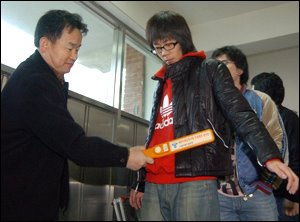 Supervisors armed with metal detectors watched the halls, checking that students going to restrooms did not have cell phones with them. "Many female students were offended when they were scanned with the detector."

After last year's cheating scandal in Kwangju, when answers were passed to students by text messaging, all cellphones were banned from testing rooms this year. The Joongang Ilbo article says that 12 exam takers were expelled from the test for carrying phones during the test today. One student in Busan who forgot nearly faced punishment from authorities wanting to follow the letter of the law:

The Busan Metropolitan Office of Education said, “He must be punished for cheating in accordance with the CSAT Guidelines, but some have pointed out that it would be too cruel to punish any examinee for the simple mistake of carrying his cell phone. So we have suggested that the Education Ministry allow [him] to take next year’s CSAT”.

The student has no choice but to try again next year because despite being allowed to continue with the test, he was so unnerved he gave up halfway through. While the above quote may seem like bureaucrat-speak which is stating the obvious (that a mistake like forgetting about your phone shouldn't invite harsh punishment), few other schools, according to the Joongang Ilbo, allowed the students caught with phones to finish the test. Just for fun, it's worth looking at how (in English) the different papers described these students. While the Herald called them students "who forgot to turn in their mobiles", and the Chosun Ilbo spoke of students who where "expelled for carrying mobile phones", the Joongang Ilbo's article was titled "Students try cheating by cell phones despite ban". The Joongang even has a ministry spokesperson back up its 'zero tolerance' viewpoint.

That some students would forget something that is so embedded into the fabric of their daily life shouldn't really surprise anyone. The idea that they can't carry their personal window to the world with them on the 'most important day of their life' may seem so inconceivable to some students that they just forget it's there - or they may be so nervous that they just forget. If some students get so stressed out that they jump off of buildings, it doesn't seem far fetched that they they might forget about their phones. It doesn't seem right to make them defer university for two years over a simple mistake.

While high school students slugged through the test, my middle school students had a great day, as all classes were cancelled, while elementary students got to start school an hour later than usual. I'm sure those pleasant associations with test day will be forgotten in a few years, however.

27 students who were found to have cellphones will have their test scores disqualified and be prevented from taking the test next year. Authorities concede that most of them likely had no intention to cheat. A Joongang Ilbo article on the same topic describes two rather unfortunate situations:

A 20-year-old woman in Gyeonggi province left an MP3 player in her bag beside a lectern at the front of the test room after the exam supervisor only ordered "cell-phones and calculators" to be collected. When another supervisor monitoring an English test later asked for MP3 players to be submitted, she did so. The next day, however, the Education Ministry disqualified her and banned her from taking the test next year.
An 18-year-old male student in Gangju was also disqualified after taking the test wearing his brother's coat, which contained his father's cell phone. The father called the cell-phone to find out where it was as the student was taking the test.

Quite obviously, these situations are not the students' fault, but they're going to have to delay their lives for 2 years anyway. The education ministry might be better off rethinking this hastily-passed law, which interprets mere possession of an electronic device as intent to cheat. The Joongang Ilbo also has an excellent article on cellphone culture amongst teens in Korea, at one point describing them as "a part of their owner's psyche."

Oh, and Oranckay had an... interesting photo of a mother bidding her daughter good luck before the test.