Cashing in on the Big Test 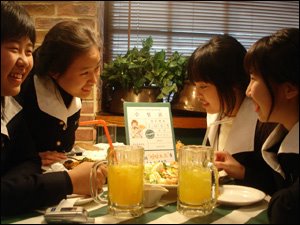 Today's the big day. In just a few hours, the test that thousands of kids have spent years studying for will be over. The Chosun Ilbo tells us that

The College Scholastic Ability Test for the 2006 academic year will start simultaneously at 966 schools in 75 districts across the country at 8:40 a.m. on Wednesday. A total of 593,806 people will take the test this year.

On my way home tonight I saw a half dozen students covered with blankets sitting outside the gate of a nearby high school, where, in a show of support, they will wait until morning for the test-takers to arrive. It's the first time I've seen it, (guess I haven't walked in front of high schools the night before the 수능 (CSAT) in previous years) and my obvious question would be, 'Does anyone know where this tradition comes from?' It doesn't seem like the most pleasant time of year to be outside all night (though I guess tonight's temperature of 5 degrees isn't as cold as it could be). It looked a bit like this: 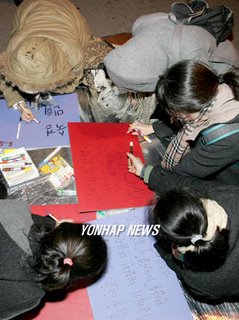 At any rate, this time of year brings the requisite pictures of parents praying for the success of their children at temples and churches, workers loading boxes of these agents of destiny onto trucks, and students checking name lists onto the front pages of newspapers, along with other articles, in the days leading up to the test (very slight variations of the latter photo appeared on the the front pages of both the Joongang and the Chosun...why I'm not sure). It's in the days after the test that we get to read about students killing themselves, usually by jumping off buildings, in response to worse-than-expected test scores.

Happily, the Korea Times has something much more heartwarming to report. After dragging Valentine's Day out for 3 months (much to the benefit of the chocolate, flower, and Chinese food industry), and turning a fun exchange of pepero started at a school in Pusan in 1994 (according to this Joongang Ilbo article) into another consumer goldrush for Lotte, corporate Korea has discovered the consumer possibilities of another event: after-test celebrations! Yes, Lotte World and Seoul Land are giving 50% discounts today on students with exam IDs! CGV is giving a whopping 1000 won discount! Family restaurants are giving out free food! Megabox is letting test takers roll giant dice! "We've sucked your childhood, blood, and sweat from you, prevented you from having a social life for the last year or more, but now we'll give you free food and 1000 won off if you have your ID card with a coupon which you can download from our website, or 2000 won off if you bring the test ID and death certificate of a friend or relative who recently (dated to within 2 days of the test) jumped off a building! Have a nice day."