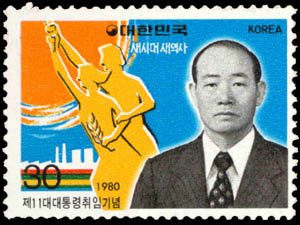 Back in May, on the occasion of the 25th anniversary of the Kwangju Uprising, Oranckay mentioned the fact that the many of the paratroopers who carried out the bloodshed were awarded medals, which have never been revoked. A Hankyoreh editorial which he linked to mentioned efforts by lawmakers to amend the law on awards and citations.

A September 7 Chosun Ilbo article confirmed that the law had been amended, and that it had been amended with not only paratroopers, but with former presidents Chun and Roh, in mind:

An official with the Ministry of Government Administration and Home Affairs said Tuesday (Sept. 6) that when the amended law goes into effect on Nov. 5, the government would have to decide whether to strip the two disgraced former leaders of their decorations.

Decorations have so far been given -- and withdrawn -- at the request of particular bodies. But the new law amended in June gives the power to the home affairs minister independent of any requests, in this case from the Defense Ministry, which awarded them in the first place.

But the interior ministry is being cautious, saying it would “not be too late” to make the decision once a truth commission in the Defense Ministry has completed its reinvestigation of Chun’s Dec. 12, 1979 coup and the May 17, 1980 declaration of martial law. That probe... has just got under way.

Two weeks ago, on Nov. 6, the Korea Times reported that the law had just come into effect which

gives the [Ministry of Government Administration and Home Affairs] authority to take away awards from individuals if their achievements turn out to be exaggerated or if they are later held responsible for crimes that result in prison terms of more than three years.

Two days after it came into force, the aforementioned ministry

asked the Ministry of Government Legislation and a fact-finding committee of the Defense Ministry to evaluate the legality of awarding military medals to former presidents and 79 others for their roles in military coup in December 1979 and the Kwangju civilian massacre in May 1980. [...]

Two former presidents and 12 others were found to be guilty in 1997 for their roles in the 1979 military coup, while 69 other military officers received guilty verdicts for suppressing the democratic movement in the southwestern city of Kwangju.

The article confirmed that it would wait for the results of the Defense Ministry’s investigation before making a final decision.

In the scheme of things, I wonder if those who killed other ROK soldiers (in the 12.12 coup in 1979, as well as at Kwangju - 12 out of 23 soldiers killed in Kwangju were killed by friendly fire)
got higher decorations than those who killed civilians.
Posted by matt at 2:53 AM

Besides an informative post, thanks for the stamp pic.

I'll have a class on Kwangju 1980 and its aftermath in my modern history course, and it'll make a nicely wry addition as I've been inspired to do the class with powerpoint.

I should have linked to the site I got it from in the original post, as the commentary is laudatory yet...vague:

"As a result of the overwhelming support of the nation, with various departments of society voting him as the new president, President Chun Doo-hwan, who will be inaugurated on this day, was elected to the office of the 11th president last August 27 by the National Conference for Unification, in accordance with the Constitutional regulation."

'Various departments of society'? That's a nice roundabout way of saying there was no democratic election...