By now, of course, everyone has seen those anti-Japan pictures drawn by students at Gyeyang Middle School in Incheon and posted in a nearby subway station. If you haven't, they can be found here and here, and the Marmot provides some additional information about the growing attention being placed upon them.

Now, some of the photos depict the Japanese as monkeys (and monkeys getting their asses kicked, at that): 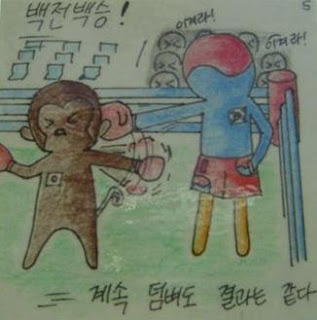 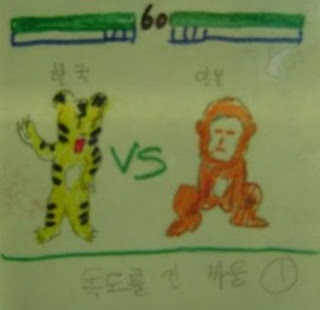 These pictures are described (on the site where they are hosted) as racial slurs, though I'm not so sure. I do have to wonder where children would learn these. Parents? TV? At school?
Maybe it was while they were playing computer games:


Strong sentiments on the Dokdo islets have led domestic online game developers to create Dokdo-related quests, enabling players to fully exhibit their patriotism in cyberspace. GoonZu Online is a role playing game that takes place in 1598, during the Joseon period, and involves trade, politics and war. Recently, the developers added a special quest in which one can battle Japanese soldiers who invade Dokdo.

"There is a lot of fighting with Japanese troops in the game, but fighting off soldiers on Dokdo somehow made me feel more heroic although I knew it was just a game," said Lee Kang-min, 23. Mr. Lee is unemployed and spends most of his time playing games, "just until the economy gets better and I can find a job," he says.

Does the writer of this piece realize just how much that last paragraph encapsulates the experience of so many young people in Korea at this moment in time? It may not be entirely fair to say that, but it's at least partially true. If you want to see some (not so interesting) screenshots of the game's Dokdo setting, have a look here.


In a recent updated campaign to conquer the Japanese island of Tsushima, the game developer added two monsters that one has to battle. (The beauty of online games is that they never end, since the developer adds new projects.) These two monsters are monkey-like creatures that jump around and attack in groups when you reach Tsushima. Interestingly, although the animals are monkeys, users could obviously see that they bore a resemblance to Japanese Prime Minister Koizumi. 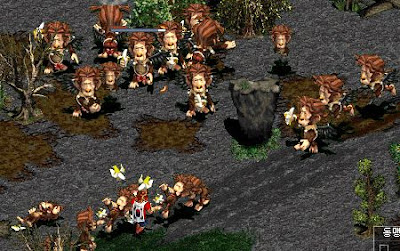 Are game developers going too far? Not so, according to GreenLove, a player that I met on cyber Tsushima. "Koizumi should get what he deserves," she said, brandishing her sword against the monkeys that started to mill around her.

Here are some full screenshots. (I found 'em here) 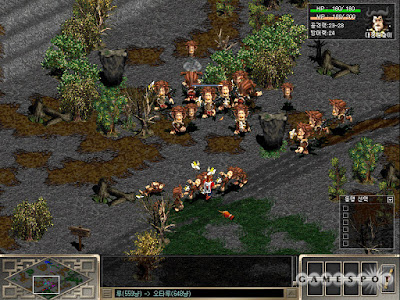 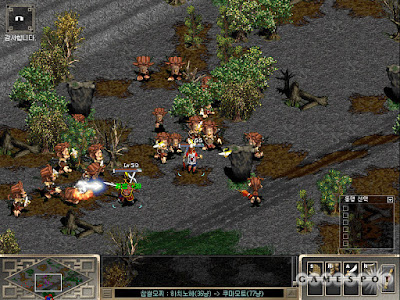 Well, at least the humour in the last paragraph is intentional this time (the story is obviously written by a gamer). The screenshots of the Koizumi monkeys make me wonder if any of the students who drew the pictures had seen the game. It certainly has many of the elements seen in the students' pictures (Korean flags, thoughtless patriotism, monkeys, fighting to the death, a simplistic reduction of the conflict to 'Us vs Them', etc). And it's worth noting that the Korean fighters are invading 'Daemado' (Tsushima), and thus 'turning the tables on the hated aggressor' (that 'simplistic' aspect of it again).

Even if this game didn't influence the pictures (possible, but it should be remembered that the game was publicized a great deal in the Korean media two months ago (and even in an English language paper) so I would imagine it's the likely source) I doubt that the monkeys are meant as a slur. One of the student pictures posted above has a tiger fighting a monkey; both animals are indigenous to one country but not the other (maybe I should say were indigenous, in the case of tigers in Korea). The monkey seems more a Western racist characterization of East Asians rather than a Korean one of the Japanese. If the idea for the monkeys came from the video game, does it make the 'slur' angle more or less likely? Do they play on existing associations or are they just seen as cute and humourous animal characters in a game? Something to ask my students about, I guess.

Speaking of my students, I’ve showed the pictures to some of my middle schoolers. The usual response is ‘very good’, ‘very funny’. And I’ve learned it’s not worth the time to argue about it, unless the person has shown some semblance of an open mind beforehand. After seeing this photo, (taken in March) I edited it a little in order to show it to my students and ask if stepping on someone else's flag was a good thing; when they said no, I could show them the original. It seemed like a relatively easy point to make… Upon my saying that the edited picture was fake and that I had altered it to make a point, their only response was “You made that picture?!” Sigh…

For those interested in online gaming in Korea, Robert Neff blogged on that topic awhile back and his post is well worth reading, as are the comments (it's a whole world I knew nothing about).

In trying to find more info on the video game I turned up this article on the current Dokdo situation, which covers a lot of ground and makes a good summary for those who are unaware of the background.
Posted by matt at 1:47 AM