For my latest Korea Times article, I’ve revisited The Tomorrow go-go club, or discotheque, that opened in the basement of the Chosun Hotel in January 1971. Whereas I had previously written about the development of go-go clubs in 1970, and referred to a March 21, 1971 Korea Times article about Tomorrow and the culture surrounding it (which got criticized as “un-Korean”), this time I refer to a full-page ad taken out in the Korea Times the day before it opened, as well as a column I'd never seen before published a few days later by former RAS member Barbara Mintz, who described the club in great detail.

One of the things that perplexed me was trying to figure out who "Joe Policy" and his "Group III" were. The full page ad refers to him a number of times as the designer of the club, and I eventually found someone online with the same name connected to a "Group II," but efforts to contact him came to naught. I mentioned this to Coco Cugat, who, along with her husband, runs the Yongsan Legacy site, and she asked me if I'd seen a post there by architect Nam Sang-so, who described how he helped design and build the club. I know Mr. Nam, and was happily surprised to find he had been involved, and emailed him for more details. As his article notes, he was helped by AFKN DJs (his email clarified that there was a group of them), so this must be where Joe Policy came from.

The weekly magazines and some newspapers published photos of Tomorrow. For example, here are the "Revolution Children" from Hong Kong, who performed selections of the musical "Hair" (one imagines not the nude parts) for lunchtime patrons of Tomorrow (I have my own library of Korea Times scans from microfilm, but Jon Dunbar helpfully took photos of the actual paper): 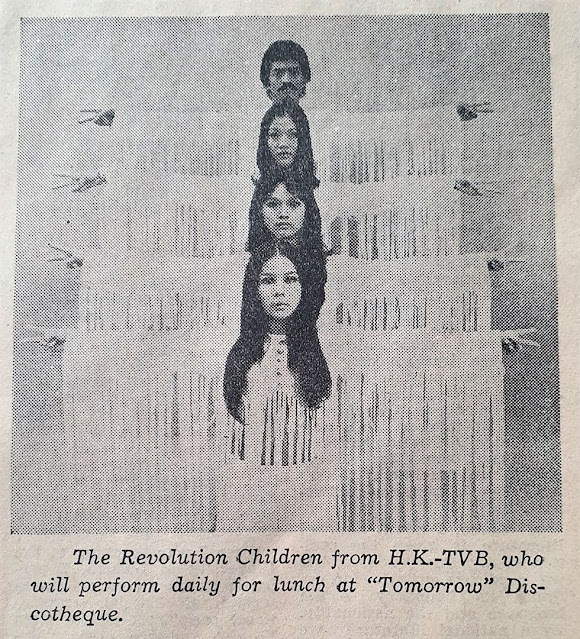 From the Korea Times, January 1, 1971.
The Filipino band Wild Five: 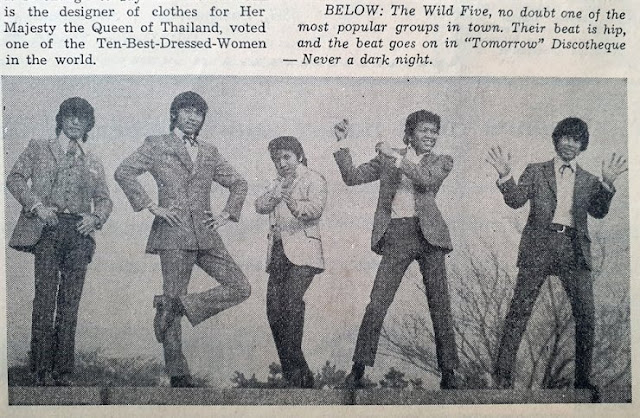 From the Korea Times, January 1, 1971.
The Wild Five had been playing in Seoul (and Japan) for some time. Here's a photo of them performing from Sunday Seoul, August 16, 1970. The caption notes that they were performing on contract with the Chosun Hotel from June to September, and that they took part in the Playboy Cup, the large-scale, annual battle of the bands competition: 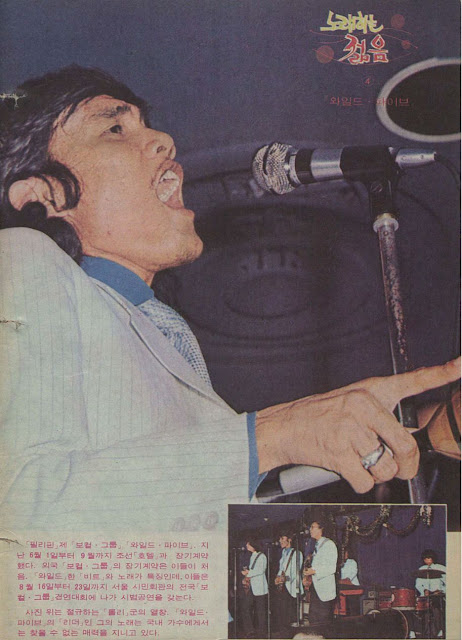 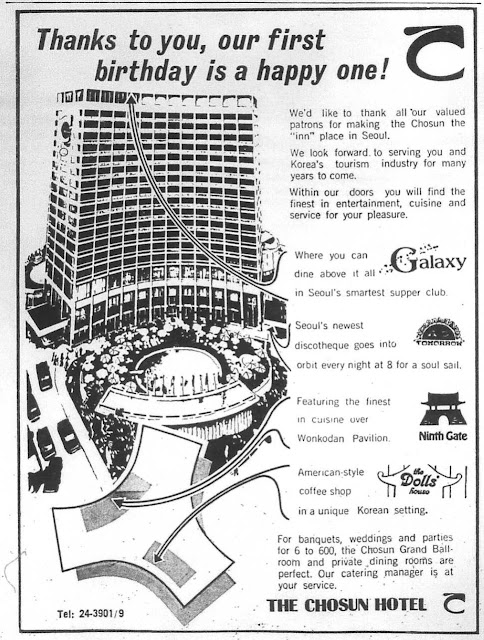 Chosun Hotel ad From the Korea Times, March 17, 1971; note the reference to Tomorrow: 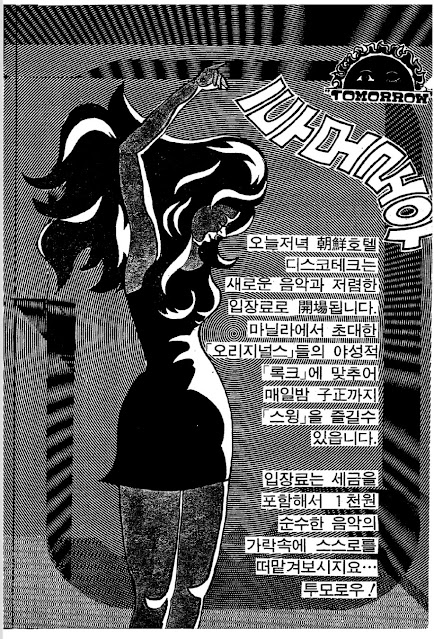 Below is the text of Barbara Mintz's January 10, 1971 column, about her visit to Tomorrow, with photos of Tomorrow included. Every photo I’ve seen of Tomorrow has been in black and white, except for three photos I've shared below, which feature a fashion shoot at Tomorrow that appeared in the March 3,1971 issue of the Weekly Kyunghyang.

Now Seoul swings! Even if it doesn't do it exactly like a pendulum does, the city now can boast a new plush place calculated to attract those in Seoul who swing to international rock or those who want to keep an eye on the contemporary scene. The place? The Chosun Hotel’s new Tomorrow discotheque.

Recipients of invitations to attend one of the several “official” openings the new club seems to have had, my husband and I happily donned our discotheque clothes and showed up at the new club's entrance in the basement of the hotel promptly at 8 pm. My husband's discotheque clothes, by the way, look suspiciously like the same old suit he wears to the office. Ah me. Definitely over 30.

Entering Tomorrow is an experience in red - from the carpets the [that] undulates under foot to the equally undulating inflated plastic walls and ceiling. One of our group compared walking down this entranceway to sliding down a gigantic red throat. Prepare to be swallowed by Tomorrow appears to be the message. 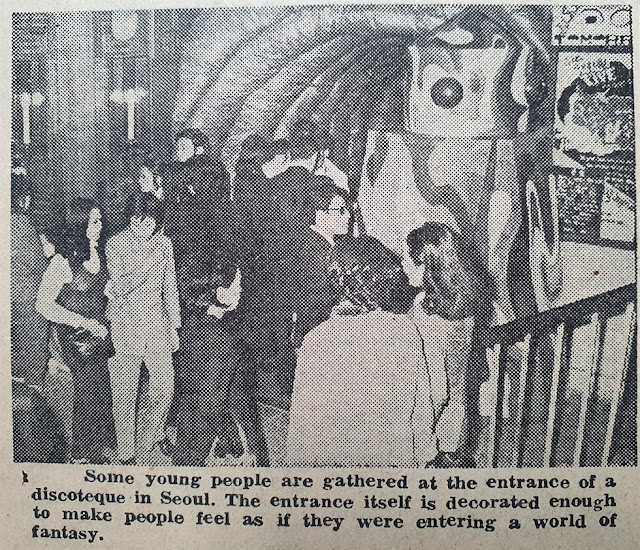 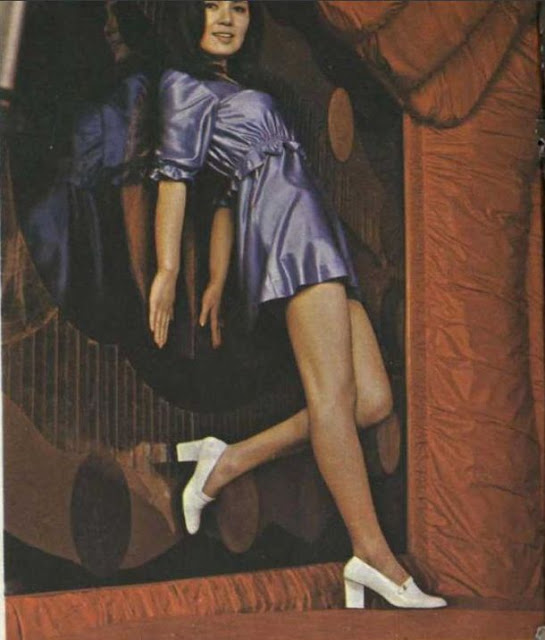 This appears to be the 'red entrance' of the club, from the Weekly Kyunghyang, March 3, 1971.

The room itself is large - seating capacity 350 - and divided into three seating areas: the usual small nightclub tables surrounded the dance floor; banquettes covered in black leather with armrests for ashtrays and drinks rise in tiers facing the bandstand;  and to the right a special VIP section of small round tables each on its own circular raised platform covered in foam rubber and carpet so that one must remove one’s shoes (hiding them in the shoe box that folds out from the base of the platform), step up and then sink gracefully down on the foam rubber.

These round tables are most comfortable to sit at, each having its own padded backrest and hanging Tiffany-style lamp for illumination. Each of these tables is named after a member of the hotel's managerial staff. 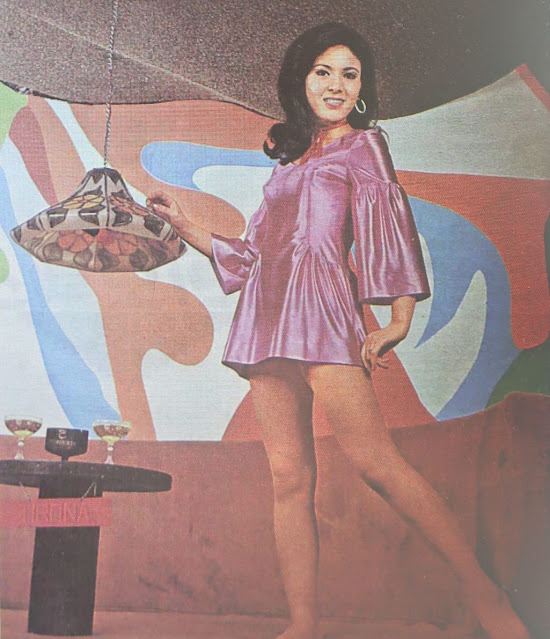 This must be the above mentioned round tables with the Tiffany-style lamps. From the Weekly Kyunghyang, March 3, 1971.
The 8 by 12 meter dance floor, elevated one step up, is made, I'm told, of polished copper (the largest such in the world, says the ad) that shines under the lights. The first actual shock you'll probably get on entering Tomorrow is the sight of the waitresses. Their costumes are silver culottes with black long-sleeve tops, shiny black boots, and platinum pageboy wigs - with bangs! 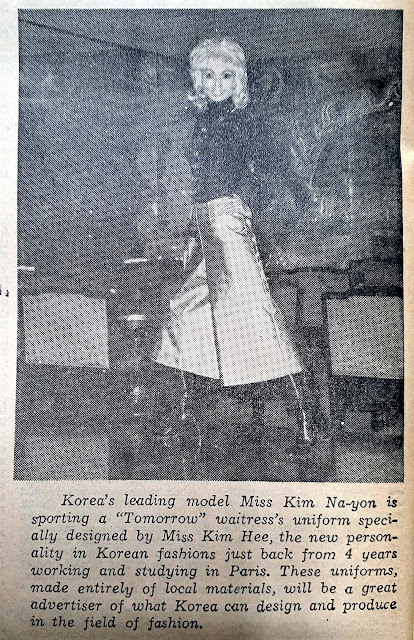 All this, including the waitresses’ costumes, is decor, but what's of most interest is of course the action. There's plenty of that. First, the bands. We heard two of them, both groups of young Filipinos, one called the House Rockers and the other called The Wild Five. None of them looks old enough to have graduated from high school, but their sound is authentic.

The House Rockers certainly live up to their name - it's electronically amplified loud rock. We began to see why Tomorrow is thoughtfully located in a corner of the basement. 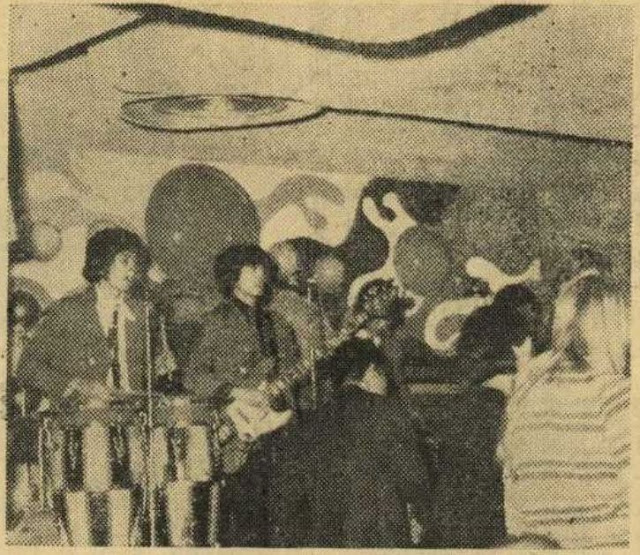 A band playing at Tomorrow. From Sunday Seoul, February 7, 1971. 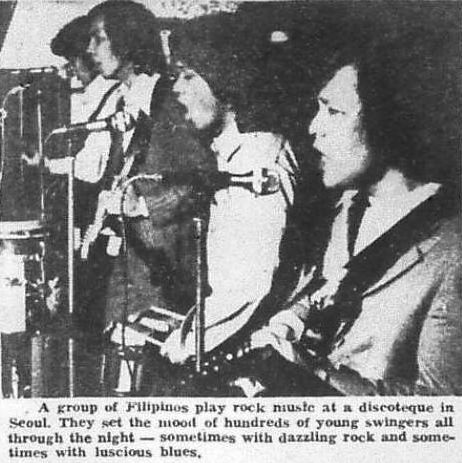 From the Korea Times, March 21, 1971.
The Wild Five, somewhat harder in drive, were nevertheless considerate enough to play a series of fox-trots (remember what a fox-trot is?) for us aged ones. I actually got my husband out onto that copper dance floor! 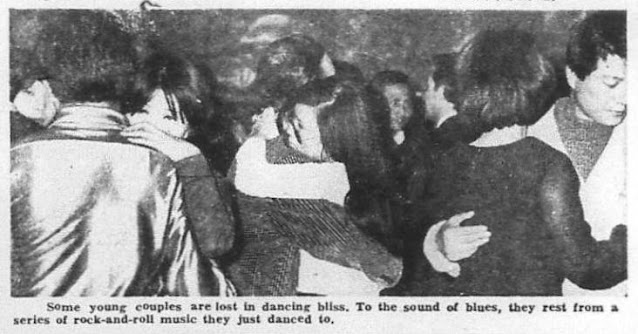 From the Korea Times, March 21, 1971.
Second, the lighting effects. Hooked into the music is a color organ that pulses abstract designs onto the walls in rhythm to the beat of the drum. Alternating with the color organ, an oil projector paints fascinating kaleidoscopic designs on the walls. I can't quite remember all the lighting arrangements (or even all the decoration), but the most spectacular is the flickering of the ten strobe lights that go into action at critical (loudest?) moments in the music. 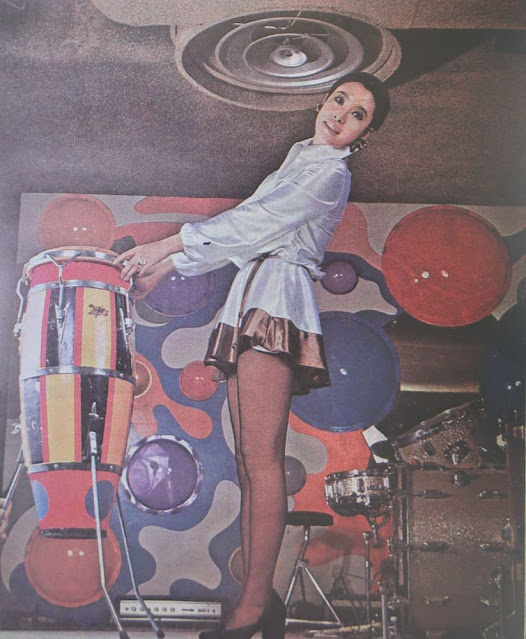 The only colour photo of the stage I've ever seen. From the Weekly Kyunghyang, March 3, 1971.

The strobes make all the live people on and around the dance floor it look as if they were in an old-time, turn-of-the-century movie. A curious flashback to the past in Tomorrowland. Mercifully, the strobe effect did not reach back to those of us perched under our Tiffany lamps.

Third, the people - fantastic. I had wanted to know what one wears to a discotheque having never been to one before. I found out that one wears what one wants to wear. Women's clothes ranged from chima-chogori to micro minis with tight over-the-knee boots to ordinary cocktail dresses to evening pants suits with accompanying long brocade coats to blue jeans.

Some of the male attire has to be seen to be believed. The only time I didn't see was formal Dinner dress, but perhaps we simply didn't stay long enough. Such a variety is fun to see. I, for one, am enjoying this period of fashionable anarchy for both male and female dress. 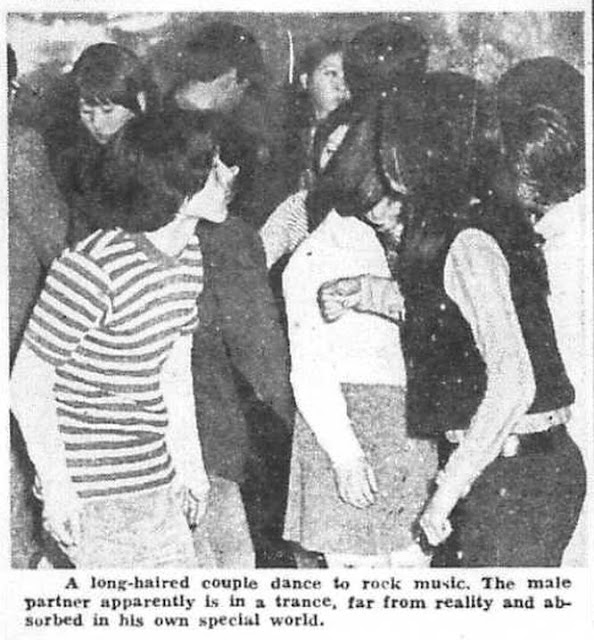 Does Seoul monopolize the beautiful young women in Korea? Certainly some of the ones we saw are stunners - both Korean and foreign. That in itself is probably sufficient attraction for the man interested in just sitting and enjoying the passing scene.

Naturally, all these people were busy dancing - jiggling and gyrating to the loud rhythm. The jigglers and the gyrators are fun to watch. Each has his own style: there's the elegant jiggler, the happy, carefree jiggler, dead serious jiggler, the sexy jiggler, the nonchalant jiggler. I haven't exhausted the types, merely my supply of adjectives. 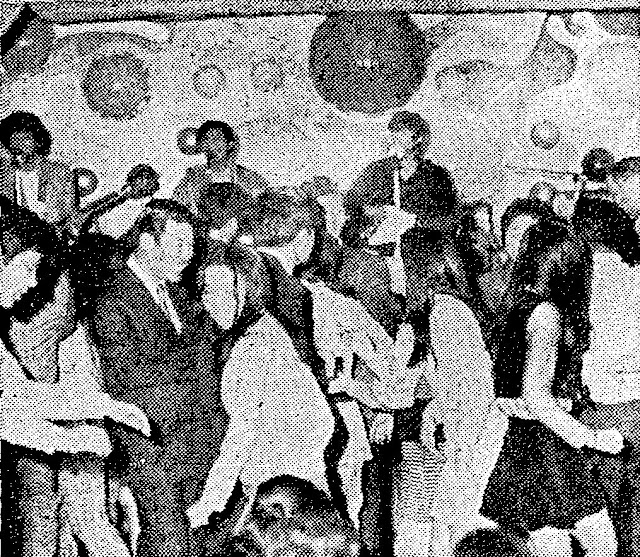 Dancers at Tomorrow. From a Chosun Ilbo article titled "Shaking the Night," March 14, 1971. The caption reads, "Midnight's rapture: Gogo-ers who don't know how deep into the night it is due to the rhythm and noise. (T Hall)"

If you want to be a member of the swinging Seoul set (it’s not your age, it's your spirit that counts), the only place to be these days is in the Tomorrow Club.

Mintz provides a description of the club that I haven't found anywhere else, in Korean or English. As my earlier article noted, the Korea Times (like other papers), described the culture surrounding go-go clubs in mostly disapproving tones, and the government soon acted to try to end the all-night revelry.