Does anyone remember Watch Your Head?

Over at the Korea Times, Jon Dunbar wrote about the changes to the Hongdae Playground and his memories of it over the years (it's officially known as the 홍익 어린이 공원 or Hongik Children's Park). I imagine I would have visited it back in 2001, though my earliest definite memory of it was in the summer of 2002, a month or so after the World Cup. I didn't take any photos of it, but did capture this closer to Hapjeong Station: Apparently it was in June that year that the first "HongDaeAp Artmarket Freemarket" (as their site refers to it in English) appeared. I remember its quick growth, and according to their site it was "newly renovated into its current form in 2003" (though that form is no longer current since a more recent renovation, as Jon points out). I remember more trees and benches in 2002, and when the construction fences went up for the renovation later that year or in early 2003.

I can't say I spent much time there, though. I can remember hanging out at club Issey (with its cheap bottles of local beer and 1500 won tequila shots) and in the little places with "soju beer hof" written simply on the wall next to the door in the buildings that now house all the little clothing shops (on the 'parking lot street') - that entire area gentrified during 2003, and I remember my shock at the difference upon returning to Korea after 6 months away in October that year. It was while going through old Korea Herald articles that I clipped during my first two years in Korea that I found an article on my favourite place from that time - "Watch Your Head": 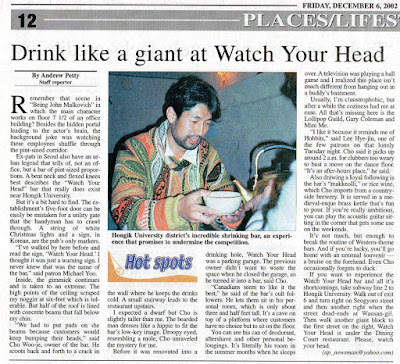 I can't help but wonder if the Canadians he speaks of included myself and my friends. Besides its small size (particularly in the owner's 'personal room,' which had a section raised a foot or more off the floor), it stood out for being a makgeolli jip in Hongdae, which was not so common then in that part of the neighbourhood. If I remember correctly it closed in 2003.

Of course, when it comes to makgeolli in Hongdae, my biggest association will always be the 'makgeolli man,' who Jon also wrote about a few months ago.
Posted by matt at 9:21 AM