Inside Story's 2006 articles on the evils of foreign English teachers

I'll admit to a certain admiration for the way in which AES quickly began rewriting their history and the history of the English Spectrum Incident to make themselves look less like bigoted misogynists and more like concerned nationalists (any desire to write 'patriots' is negated by that screenshot of their homepage circa 2006 below, with its statement written in red, "our fatherland, protected by the blood of our ancestors," which makes it clear that it is blood nationalism we are dealing with). To be sure, the incident did not occur because of concern over English Spectrum's un-taxed or "ill-gotten income" (though that's a canny tack to take, as "foreigners are taking advantage of us" never seems to get old in Korea), but because of anger at how the teachers there talked about Korean women, and particularly because of the photos of the 'sexy costume party.' When the article states, "As well, as photos of a decadent drug party involving foreign instructors and Korean women spread...," it's made to seem like it's an afterthought, when it was the main reason for the incident (and indeed, what the original 'J Ilbo' article was about). Nor is there any proof drugs were at that party, but history can be rewritten to include those as well.

Also worth noting is that the hagwon owners below blame not only parents but the desires of female students for their need to import foreign men to teach English. Can't these women control themselves? (A question asked more crudely by Hustler in 1988.) If we want a clue as to what kind of woman the AES crowd preferred, one need only (once again) look at their homepage at that time, where this image can be seen at far left, halfway down the page:

If we remember, the kisaeng Nongae threw herself - and the Japanese officer she had wooed to the edge of the cliff over the river - to their deaths after the fall of Jinju in 1593. So the kind of gal AES likes is one who not only resists having sex with foreign men (traditionally through suicide), but who kills the foreign man along with herself. Classy. Almost as classy as having kids re-enact her plunge to her death.

I started translating this a year or two ago and upon finding it today decided to finish the translation and post it. The original article is here.

[Shadows of the English craze]

Is Korea a paradise for illegal sojourner foreign instructors? 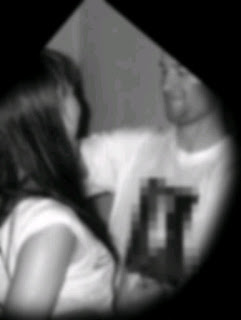 The Republic of Korea is entirely swept up in the English craze. Recently, as the number of low-grade foreign instructors who are capitalizing on this phenomenon has increased, it has created a serious social problem. As problems arise regarding these people who work as instructors or teachers in hagwons or schools, at one portal site a signature campaign to expel low-grade foreign instructors has been signed by 10,000 people.

Most of them are shocking things about Korean English hagwons which are dying to bring foreign instructors and do not properly screen instructor qualifications, and include many instances of instructors sexually toying with Korean women and denigrating them as 'fast food.' As well, they are reporting [teachers] who are treated better than their ability deserves, expensive tuition, and the problem of foreign men who do not even have moral qualifications working openly as professors at well known universities in Korea.

These things have already been reported countless times in the media but they are not being eradicated. This newspaper will make clear actual cases of some foreign instructors who sexually toyed with Korean women and the shocking truth about how they enjoy lewd parties and drugs at decadent establishments at night. 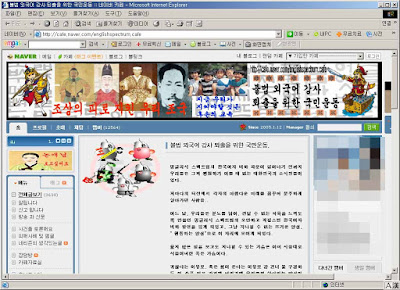 ▲ The Anti-English Spectrum cafe at N site, which reports the corruption of illegal foreign instructors

What is the ‘English Spectrum’ site? Officially it is a community and job site for foreign instructors living in Korea. However, because this site was filled with posts denigrating and toying with Korean women it also led to a social scandal, the “English Spectrum Incident.”

At that time, netizens said of English Spectrum “It’s an online business for foreign English instructors in Korea that gains outrageous, undeserved, ill-gotten income and pays no tax as it receives advertising fees from Koreans offering jobs (mostly English hagwon owners) and Itaewon adult entertainment establishment owners but doesn’t receive a cent for advertising fees from high-income-earning foreign instructors,” and carried out a movement to close the site.

A classmate of the Seoul National University biology major who completed the above sentence tipped off the J Ilbo and as it was reported and magnified significantly it blew up into the so-called “English Spectrum Incident.”

As well, as photos of a decadent drug party involving foreign instructors and Korean women spread an enormous social stir was created.

At this site as well, messages with shocking content such as "How to molest Korean female children and Korean female elementary female students" and "How to borrow money from Korean women" were posted and because of this the netizens' anger exploded. Their outcry criticized the government for being overly lenient/generous towards foreign instructors.

At an online cafe called "Anti-English Spectrum" set up by an English hagwon student after this, a movement to expel low-grade foreign instructors is operated, blowing the whistle on illegal foreign language instructors who have appeared on English Spectrum for belittling Korea, illegal activity such as distributing drugs, and victimizing women.

The posts published at this cafe are spreading online rapidly. Some illegal foreign instructors live with a number of Korean women and have sex under false promises of marriage; hence there are women who have committed suicide too; some marry calculatingly in order to get a residence visa; there are cases of them being professors at famous universities and distributing drugs to university students; of foreign instructors at women's universities toying with their pupils; many illegal / unqualified foreign instructors who have faked their diplomas or educational background exist; among them spreads talk like "Let's go to Korea and make some money and also meet women"; because of excessive pay for foreign instructors by hagwons, tuition is expensive; decadent drug parties; dating Korean women, borrowing money from them, and escaping to their home countries. Such shocking cases make up most of them and forewarn of a [negative] social impact.

'A,' who posted at the cafe, explained, "An Australian instructor at an English hagwon in Gangnam dated close to ten Korean women on the pretext of marriage and, in order to get a residence, married one of these women and also still continued to date one of the other women. However, after a year he divorced and two months later married another woman." 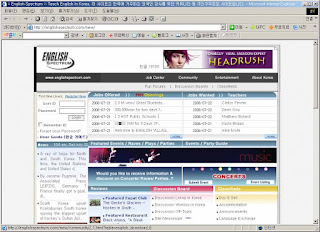 A said his interest in the realities of illegal foreign language instructors is due to a 25 year old friend who committed suicide after being toyed with by a foreign instructor.

An American professor at S University in Seoul, Mr. B, a professor at Seoul, was arrested for distributing drugs such as cocaine to college students for several years while taking his students around the Itaewon entertainment district on weekends. The professor's drug distribution case was brought out into the open by a thorough investigation by Yongsan Police at that time, but his punishment was no more than deportation.

A netizen revealed that they have seen many instances of  Korean women who have actually dated foreign English instructors and suffered mental, physical, and economic losses, and there are statistics that marriages to foreign instructors last for 2 to 3 years on average and many cases where [the instructors] divorce them without paying any alimony at all and go to their home country but after 3 to 4 months they return to Korea and live with or marry another Korean woman.

He said that not only lesser-known hagwons but also at large scale English hagwons foreign language teachers dated students and for the most part economically or sexually toyed with them. He pointed out that many of these instructors were under-qualified and illegal sojourners.

It is no wonder, then, that the owners of front line English hagwons who pay for air fare, finder's fees, and hire foreign English instructors on all manner of conditions never have even a day when when they can feel at ease. In addition to guaranteeing them a high monthly salary, these hagwons provide housing, monthly rent, utilities, and vacation expenses.

As an English instructor job advertisement in a foreign newspaper puts it, "If you want to become a Hollywood star, go to Korea ..."

Even so, if most foreign instructors hear that they can get more money elsewhere, it is common for them to do a midnight run, so English hagwon owners complain in unison, "If not for parents and female students, we would hire Koreans right now."

Among the more than 10,000 Anglo-Saxon foreign lecturers currently here, many entered the country initially on tourist visas and work as unqualified English instructors, and not a few are illegal sojourners [likely meaning visa overstayers].

Another netizen saw an ad in a newspaper in Vancouver, Canada by a Korean English hagwon recruiting an English instructor with the title, "If you want to become a Hollywood star, why not go to Korea?" and beneath an illustration of East Asian women it [offered] working hours of 6 hours a day, 5 days a week, free accommodation [including] monthly rent and utilities, and guaranteed supplementary income through private tutoring, suggesting a $6,000 monthly income, and its only qualification requirement was a "college graduate" (a junior college in Korea rather than a university) and it said one's major did not matter. 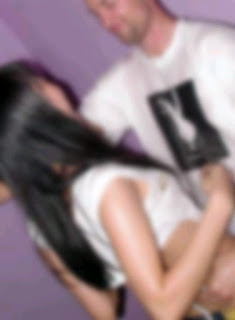 Actually, what he pointed out does not only occur at the Han River outdoor swimming pool. Every summer at beaches, outdoor events like the mud festival are promoted to attract foreign tourists, but according to the testimony of local concerned parties, among the foreigners at these places, rather than tourists, there are more foreign instructors or foreigners whose jobs aren't clear who drink alcohol and cause disturbances.

There is an urgent need for fundamental measures to stop the harm to students caused by some illegal or unqualified foreign instructors who toy with and denigrate Korean women and foster drug and decadent culture, as well as the harm caused by their excessive treatment by hagwons which have no qualification screenings. In particular, it is urgent to adjust the gender ratio [which at the moment] puts foreign men first to increase the number of female students, as well as to adjust the role of the authorities' measures and of media.


Anti-English Spectrum points out that the Immigration Office, which manages illegal sojourners, is suffering from a significant shortage of personnel and that the Ministry of Education should cooperate with the police and relevant agencies to crack down on illegal foreign instructors.

"A university in Gangbuk, Seoul, hired an unqualified native speaker as a professor and when problems arose dismissed him. The university itself needs to make efforts to verify [teachers]," a netizen emphasized.

In the reader's page of a certain newspaper on the 9th, a housewife, Mrs. Kang, said, "At the English hagwon my children go to the native speaking instructor often changes, and it's because at the hagwon they hired illegal sojourners and when trouble arises they send them back," while others do the same but don't send them away, which is disquieting, she said.

As well, "Those illegal sojourners who lack qualifications receive a salary of 4 ~ 5 million won a month, but when we look at our serious unemployment situation this is a problem, and what are the government's measures regarding harm to students?"

Meanwhile, the 'Anti-English Spectrum' cafe is constantly carrying out campaigns in various quarters to report on the realities of such low-grade foreign instructors and expel them from the country.