[Update: Video of this lecture can be seen at the RAS-KB blog.]

Tonight Jacco Zwetsloot will be giving a lecture for the Royal Asiatic Society titled "The Long-Forgotten World War II Prisoner of War Camps in Korea." Here is a summary of tonight's lecture:


As an (unwilling) part of the Japanese Empire, Korea was involved in World War Two. We have all heard of the conscripts, the forced labor, and the comfort women. However, fighting did not actually occur on Korean soil. Soviet forces arrived in Korea from Manchuria in mid to late August, and US troops made landfall in Incheon on September 8, 1945 to receive the Japanese surrender and disarm and demobilize Japan’s military.

One aspect of Korean history during that period that has been forgotten – seemingly by all sides – is the approximately 1,500 Allied Prisoners of War who were held in Korea from September 1942, only a couple of months after the last non-Axis foreign civilians had been forcibly deported from Korea by ship. The first Allies to be imprisoned here were British and Australian troops from the fall of Singapore. They were joined towards the end of the war by American soldiers captured in the Philippines, after they were initially held in the notorious “hell ships,” as well as in Japan. In all, three camps were operated, run by Japanese officers and staffed by Korean conscripts and civilians. A few POWs died, but most were rescued and brought home in September 1945.

More details can be found here. The present day location of these camps in Seoul, Incheon, and Hungnam (North Korea) will be revealed, and I'll probably be speaking briefly about helping discover the location of Seoul's camp. Just for fun, here are a few photos: 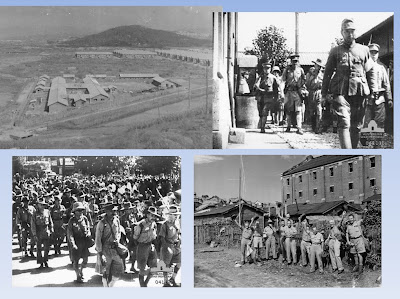 The lecture will be held at 7:30 pm tonight (Tuesday) in the Residents' Lounge on the 2nd floor of the Somerset Palace in Seoul, which is north of Jogyesa Temple, and is 7,000 won for non-members and free for members.
Posted by matt at 4:05 PM

Long time reader of your blog. Just curious if this RAS lecture will make its way to your blog or perhaps to Slideshare? Just curious as it is a fascinating topic.

Oh Matt, you should have asked me. I tracked down the Seoul camp (the one used for PR purposes) while researching for one of my tours last year.

Pretty much all of the RAS lectures are videoed and put on the RASKB Blog. I imagine this lecture will be up within a month or so. I'll link to it when it does.

Oh, and ZenKimchi - we actually found it about two years ago, but as it wasn't my project, I never posted about it (yet).

I wish I could attend. Jacob is an informative and interesting guy, and perhaps my favorite lurker in the K-blogosphere.