I was a bit too busy yesterday to remember, until late at night, that May 17, 2005, was the date of my first post here. My friend, Jamie Doucette, had convinced me to start the blog Two Koreas with him several months earlier, but wanting to focus on topics outside the focus of that blog, I started this one. I can't say I'm overly fond of my first post, about Dokdo, but I suppose it was a precursor to a number of posts looking at Korean nationalism over the years, so I guess it's not so bad. It ended up coming first because it took me longer than I imagined (as it always does) to write posts about the historical background of the Kwangju Uprising and the escalation of violence during the uprising.  Today is the 35th anniversary of the Kwangju Uprising; it's hard to believe so much time has passed (since I started this blog and since the Uprising itself).

Writing this blog has been a great creative outlet and has allowed me to converse with and meet a lot of wonderful and interesting people over the years. I'm thankful for the opportunities writing here has given me and I'm very grateful to the readers who have taken the time to read what I've written on this blog (let's face it, a lot of them are not short posts!). Though I've been rather busy and not had the chance to write as much here as I'd like lately, I will continue to write for the foreseeable future, when I find the time. I've left quite a few unfinished series (The 2005 English Spectrum Incident and the 1988 Olympics series, for example, are almost complete, but not quite) and have a few more I'd like to write at some point.

Thanks for reading these past ten years!

Postscript:
No Dokdo floats at the Buddha's Birthday Parade this year, just animals with rocket launchers and fire-breathing dragons! 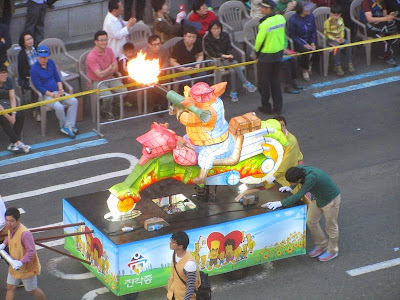 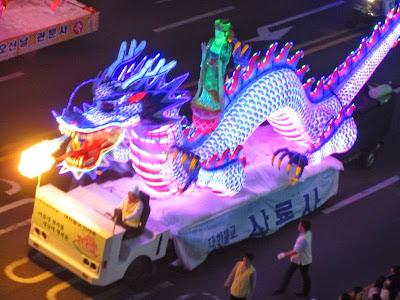 Congratulations! Quite a few bloggers on my blogroll are celebrating their tenth anniversary (blogiversary?) this year. Here's to ten more years. Keep up the great work.

Very cool that you've made it this long. Looking forward to what's coming in the next few years (even if it isn't all at this site).

I have to say hadn't noticed the passing of the Kwangju anniversary on the 18th. 20 years ago it was as difficult to miss as Christmas, or Pepero Day. Whether for better or worse, there has been a general withdrawal from politics by the younger generation.

Congratulations on 10 years of great blogging!

Thanks for the well-wishes on this blogiversary, everyone. I never imagined I would be at this for ten years. Time flies!

And considering I contributed research to the case, it was nice of the UN Committee on the Eradication of Racial Discrimination to announce its decision that HIV testing of foreign teachers is discriminatory a day after my blogiversary; if only a cold virus hadn't also decided to celebrate with me!

Hey wow, I hadn't realized the timing! That was considerate of the CERD. Happy anniversary.