Comedian Jeong Chan-u got more of a response than he bargained for when he appeared on 'Cult Two's Veranda Show' on MBC on Tuesday wearing the sweater seen below, causing controversy. Netizens weren't impressed, saying they were reminded of Japanese war crimes, and that even if it was unintentional he should have seen such a response coming, and so he apologized on twitter yesterday for causing offense. 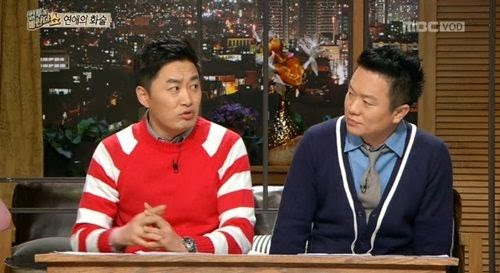 (Also regarding MBC, someone decided to have some fun when an MBC program censored the breasts in Botticelli's The Birth of Venus.)

Speaking of controversy, a week ago it was reported that a restaurant in Itaewon had caused controversy by naming a fried chicken dish 'Heukhyeong,' or 'black big brother.' Mike Hurt dug to the bottom of this and found that it had been blown out of proportion by an irresponsible media outlet. It's nice to see Mike back to regular blogging.

On the topi of restaurants and eating, Gord Sellar has written a post placing the 먹방, or 'broadcast eating' in context, as well as another looking at why good restaurants so often go bad in the Seoul area.

As well, this interview with the elderly Chae Hyun-gook, a fascinating, if mostly unknown, figure who financially supported aspects of the democracy movement in the 1970s and 1980s is well worth reading. I liked this:


The worst of all is politicians who are desperate for strife. Ideologies and any other things are not important. They just can’t stand amicable relationships and are in need of discord to be influential.

At the other end of the age scale, I also found these personal looks by a young woman at the influence of her father on her decision to become a journalist and on his work with the Korea Center for Investigative Journalism worth reading.
Posted by matt at 3:48 PM

"Comedian Jeong Chan-u got more of a response than he bargained for when he appeared on 'Cult Two's Veranda Show' on MBC on Tuesday wearing the sweater seen below, causing controversy."

A Rorschach test for myopic morons.

South Korea seems to be one of the few nations in the world that allows public policy and cultural discussion to be driven by spotty 14-year-olds with Internet access. We understand why teenagers might have a retarded, underdeveloped view of the world -- hey, I used to be one myself -- but aren't the "adults" in positions of responsibility and authority here even more retarded to actually care what they think?

Of course, the above comment is just me being silly. Again.

The way the media ecology in South Korea works is that lazy-ass journalists here troll online discussion fora in search of potentially inflammatory comments that they then report on as "controversial." The thing is, if they didn't report on them in the first place, there would be no "controversy" so it's actually the reporters themselves who are generating the controversy, which of course helps drive page views and, if they're lucky, sell a few more papers if that's what they've (still) got.

This model also serves a more insidious function: By "reporting" on the mostly juvenile commentary of the Netizenry, it allows Korean reporters to present themselves as the reasonable, mature voice of adults in charge. In other words, they can maintain their position of cultural "superiority" without much effort at all, and most importantly, don't have to engage with actual adult commentary and insight for which they are largely unequipped intellectually.

In this way, the South Korean mediascape remains childish, ridiculous and largely toothless, while the chaebols are largely left alone to keep on raking in the cash, which is really the main point, after all.