Someone - a farmer? - having makgeolli with Park Chung-hee, presumably in the 1960s. I found this on my computer the other day and don't know where it came from. I couldn't help noting that he's pouring with two hands. 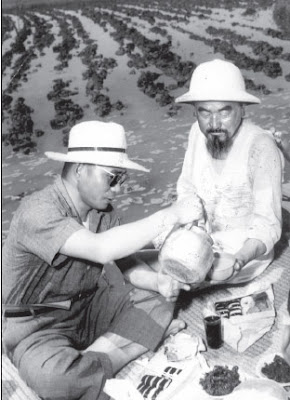 I wondered if it might be someone like his father, but no, his father, Park Seong-bin, who was born in 1871 and took part in the Donghak Uprising, died in 1938. That link does reveal that Park Geun-hye's first cousin once removed was in the 90s band
Sechs Kies. The things you find out through Wikipedia. At any rate, one hopes that his drinking partner didn't imbibe too much, say something dumb, and get himself arrested.
Posted by matt at 6:20 PM

Nice find. Not sure if it's the 산성막걸리 mentioned in the article, but I came across makgeolli advertised as his favorite in a small place in Hongdae, and I have to say, it was pretty damn good.

Google search that image (sorry for the long link, but it works):