A “Cash” Transaction in Korea

Foreign correspondents in Korea during the Russo-Japanese War

Part 1: From Japan to Korea
Part 2: In Seoul and Chemulpo
Part 3: Along the coast of Korea
Part 4: R.L. Dunn: Jack London knows not fear

I hope to return to this at some point - discovering that Collier's Magazine can be read online has lead me to find several new articles, especially those by the photographer R.L. Dunn, who accompanied Jack London and Frederick McKenzie as the first foreign correspondents in Seoul in 1904. Below is one of the more interesting photos and stories associated with Robert Dunn from that time, as published in the June 4, 1904 issue of Colliers. 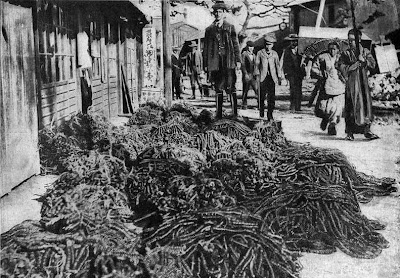 A “Cash” Transaction in Korea

R. L. Dunn, Collier's special war photographer in Korea, wrestled with many hardships and obstacles in his march from Seoul to Ping-Yang. Some of them he expected and tried to forestall. Others he met as they befell. He had not reckoned with having too much money as one of the troubles of campaigning in Korea or anywhere else. The photograph, which shows Mr. Dunn in the middle background, does not explain itself, because it conveys the impression that he is examining a huge heap of sausage, possibly procured as an addition to his field commissary.

As a matter of fact, however, the photographer helplessly surveying a mountain of money three feet high and sixty feet around the base. It is Korean currency, copper coins, in strings of a thousand each, the kind of disk, with a square hole punched out of the middle, which was first used in China, and a few hundred or thousand years later borrowed for the fiscal system of the Hermit Kingdom. From fifteen to thirty of these "cash" are required to equal the value of an American cent. A string of a thousand will weigh several pounds, a dollar's worth will make a load for a strong man.

Mr. Dunn had no intention of stripping Seoul of its small change when he gave the fatal order to Kurita, his interpreter. He was making ready his outfit for the advance, and it occurred to him that a supply of native money would be indispensable, inasmuch as a good deal of forage and other supplies must be obtained along the way. In addition, Kurita assured his master that many necessaries on their list could be had only in districts further north, and that "plenty of money" must be packed along. “Plenty of money” meant at least two or three hundred dollars to the American bound on a campaign of weeks. But he told Kurita to go out and find change for one hundred and fifty dollars, and be quick about it.

The forenoon passed and no Kurita returned. He was needed for a dozen urgent errands, and the afternoon was nearly spent, before Mr. Dunn became uneasy, impatient, then alarmed. The interpreter must have absconded, and all the foreign correspondents in sight were rounded up as a searching party. It was useless to notify the native police, and the photographer and his friends did not delay for official justice to be awakened from its slumbers. Just as the expedition was starting forth, one of the hotel boys came running up the street, beckoning to Mr. Dunn, shouting breathlessly: "Come, look, see, master. Kurita no can do. Have got, but no can do."

The boy led the way to a courtyard in the rear of the hotel, where the hapless Kurita yelled for joy as he sighted the party:

"Plenty money, got him cheap," was the interpreter’s greeting. "What you wanchee me do now?"

In the words of Mr. Dunn, as he wrote about it in a letter to the office:

"It took me only an instant to realize that I was the proud owner of what looked like a whole city block of real money-money enough to sink a ship, money piled in heaps and heaps, money enough, you would think, to last a spendthrift a million years."

Kurita had filled the order, and the coolies had been staggering under their burdens of “cash” from every corner of Seoul to the courtyard since morning, while the native money changers had put up their shutters until they could renew their stock.
“I had the money all right,” says Mr. Dunn, “but what could I do with it? I could not carry it, and nothing short of an army could move it. We paced around the edge of the heap and measured sixty-odd feet of circumference, while the average height was at least three feet. Kurita insisted that twenty men were needed to guard my wealth, night and day, until I should be ready to move it.”

Mr. Dunn was ready and eager to take the field, so nothing else could be done than to take a few strings of “cash” for immediate wants, and leave the mountain where it lay until its owner should come again to Seoul. Kurita was authorized to employ a guard of worthy and brave men, of strictest integrity, and a score of them, standing watches in relays, hovered around the concentrated opulence when collier’s photographer and his interpreter hurried away to the front.

They returned two weeks later, to find that many strings of “cash” had evaporated, although the guards swore by a million-odd saints and devils of the Korean mythology that not one copper coin was lacking. However, when it came to paying the wages of the guards for two weeks, on top of the singular depreciation noted, the mountain of cash had melted almost to nothing. It was a fact that the heap of money had eaten itself up, and the only beneficiaries were the sentinels, who shuffled away, doubled over with the weight of installments of their wages, and later came back with carts to collect the remainder.