Ojinam, and an RAS lecture on the "Catastrophic Losses of Korea’s Architectural Heritage"

Tomorrow night Peter Bartholomew will be giving a lecture for the Royal Asiatic Society titled "Catastrophic Losses of Korea’s Architectural Heritage from 1910 and Continuing Today." Here is a summary of the lecture:


Mr. Bartholomew will first explain the uniquely sophisticated, Korean aspects of the architecture and the important design and aesthetic cultural values and then will then progressively clarify the history of their phased destruction, first the massive demolitions of monumental architecture nation-wide during the 1910~1945 Japanese occupation period, second during the terribly destructive war of 1950 ~ 1953 and finally the tragic losses during the post-war “development” period, especially from the mid-1960s and continuing as we speak, today.

Finally, Mr. Bartholomew will present an analysis of the Korean policies (government and personal) since the 1960’s toward continued preservation, reconstruction and maintenance of the very few remaining examples of Korea’s traditional architecture, with special emphasis on the “hanok” and the fight that he is waging to preserve the few remaining examples.

Mr. Bartholomew has lived in Korea since 1968, always residing in an original “hanok” home. He initially lived in Sŏn Kyo Jang estate in Kangnŭng, Kangwŏn Province (east coast), the 300-year-old home of a Chosŏn Dynasty aristocratic family which is arguably the finest example of semi palatial, aristocratic architecture remaining in the country. He has studied Korean architecture privately for the past 45 years, frequently appearing on television and other media to wage his preservation campaign and now among Koreans has the nickname of “Guardian of the Hanok” (한옥지킴이).

The lecture will be held at 7:30 pm tomorrow night (Tuesday) in the Residents' Lounge on the 2nd floor of the Somerset Palace in Seoul, which is north of Jogyesa Temple, and is 7,000 won for non-members and free for members. More information can be found here.

I'm certainly looking forward to this presentation; some of the stories Peter has told me are pretty jaw-dropping (with one of them involving Chun Doo-hwan).

The photo at the top of this post is of Ojinam, which was, as Scott Burgeson put it, "for many years the largest and most famous yojong in all of Chongno." Scott showed it to me back in 2006, and the security guard outside was nice enough to let us poke our heads in the gate.

This is a photo of what it looked like before it was to be destroyed: 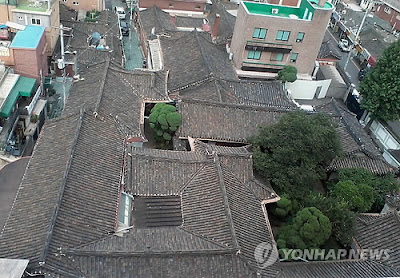 This blog has some incredible photos of what it looked like inside the gate. Sadly, it no longer stands. 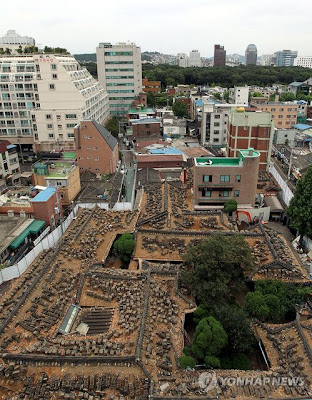 This is what the complex looked like in September 2010 when demolition began. You can see that they were apparently saving the tiles, which are in piles on the roof. As it turns out, however, Jongno-gu announced at the end of October that it would be moved to a parking lot in Buam-dong and restored there.

Here's what it looked like in February 2011, after Scott showed the site to me; I later went back a couple more times. The fact that it was going to be moved didn't make it look any less desolate or demolished (though we did notice that all of the beams had been marked and that tiles had been piled up to be re-used). 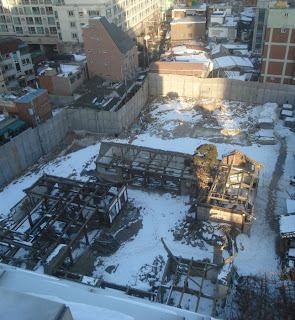 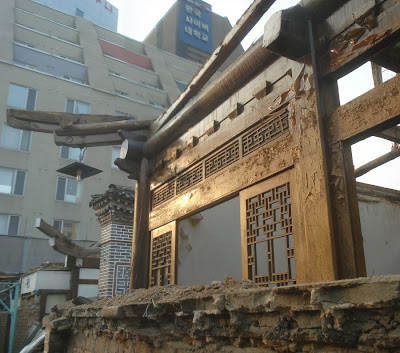 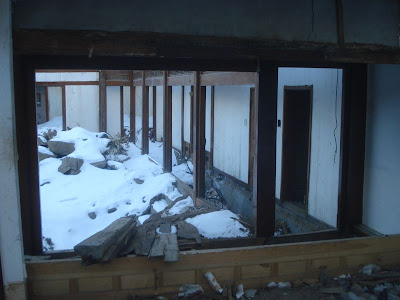 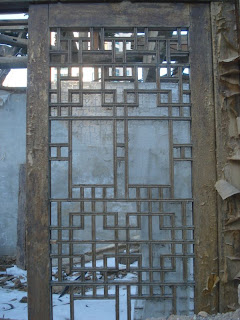 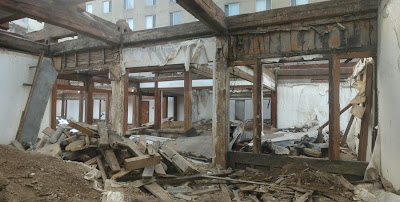 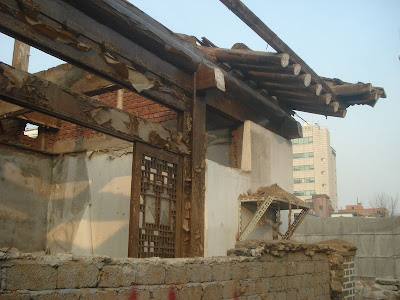 And so it goes. I doubt the shiny new hotel being built there will add much to the neighbourhood.
Posted by matt at 6:18 PM

It's time for the foreign community to get on rack with the Korean attitude towards hertiage preservation.

Cultural treasures are meant to be preserved in textbooks, or behind museum showcases in the form kitch diorama.

In built form, ancient relics and architecture are just speed bumps on the road to wealth maximisation.