Are the days of real french fries gone?

So, 15% of Korean students are overweight, apparently:

According to the survey conducted by the education ministry of 87,000 students of the country's 758 elementary, middle and high schools, 14.7 percent were classified as obese, up by 0.4 parentage points from a year earlier.

"The increasing number of obese students is mainly attributed to bad eating habits as well as the lack of sleeping and exercise," said a ministry official.

In response to the question of how often they eat fast food, 56.9 percent of elementary school children, 63.5 percent of middle schoolers and 67.7 percent of high school students said they indulge in fast food at least once a week. 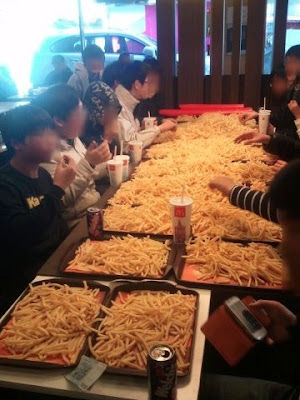 Photo from here; Gawker breaks down the apparent sources here. Personally, I could think of better things to spend (apparently) 227,000 won on. Gosh, I wonder what area of Seoul this could have happened in?

I can't help but want to listen to Byul's song 'Are the days of real french fries gone?'
Posted by matt at 2:59 PM

I've really noticed the girth of Korea's youth increasing since I came here nine years ago. It's funny that they designate these Green Food Zones, but that usually doesn't include pojang macha selling deep fried Pokemon-shaped pork cutlets and popcorn chicken drenched in ketchup. When I was a teacher, I banned any food in the classroom as the smells were so disgusting.

The lassez-faire parenting outside academics is also evident at the supermarkets, where the roliest-poliest of young males push through shoppers to get to all the free sample kiosks with no reprimand from the parentals.