On August 18, KBS News resurrected the scourge of the 'unqualified instructor' in this report:

A good many native speaking instructors at city and province-run English camps are unqualified. 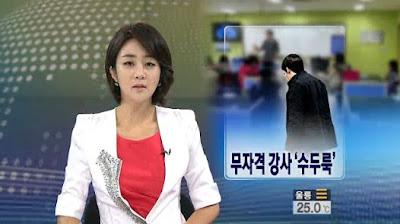 There are a good many unqualified instructors
If you are the parent of a young child, there is a concern about overseas language study.

The problem is the cost.

So, during school vacation, free English camps run by [local] governments are popular, but it has been revealed that there are a good many unqualified native speaking instructors.

At an English camp run by Gwangju City, elementary school students eagerly sing along to a pop song.

However, the native speaking instructor they should be learning from is busy following the instruction of the Korean teacher.

This is because, though the teacher came from America, she is a second year university student with no English instructor qualifications.

English camp official: "When it's a Korean teacher the children concentrate more..."

At other English camps the situation is the same.

It's been revealed that, of the 108 native speaking instructors working at 11 English camps run by Gwangju city and Jeollanam-do this summer vacation, more than 80% are university students who entered the country on tourist visas.

Those wanting to work as a native speaking instructor in our country must have a university degree from one of the 6 countries that use English as their mother tongue and must receive a English conversation instructor visa or short term employment visa.

Gwangju city hall official: "As it's based mostly on playing, we don't think of those people as instructors. If you changed it to graduate students who have graduated from university it wouldn't be a problem."

Unqualified native speaking instructors are taking over, as they can be hired for one third of the pay that native speakers with English conversation instructor qualifications receive. 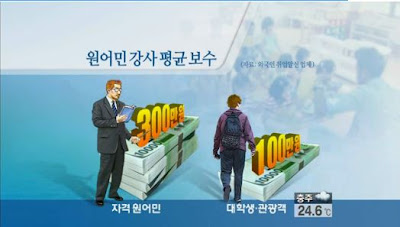 English camp student: "The native speaking teacher only has materials, so it's not fun."

With 1.5 billion won of the city and provincial budget put into the English camps, it seems difficult to exempt them from criticism for degenerating into shoddy camps.

I love how KBS tells us that "It's been revealed that [...] more than 80% [of English camp foreign instructors] are university students who entered the country on tourist visas," but they don't say how this was found out. Perhaps a divine messenger let them know.

As for the bit about "the native speaking instructor they should be learning from is busy following the instruction of the Korean teacher," one would expect anyone, even someone with lots of qualifications and experience, to follow the lead of the Korean teacher considering that they're likely more familiar with how a Korean summer English camp is run than someone who's brought in for a month or so and who may not have any experience with Korea.

Also, I notice the report never mentions the TaLK (Teach and Learn in Korea) program which allows university students who have completed two years of school to teach in public schools for reduced pay. For more on this program, and on the issue of 'unqualified foreign instructors' in general, do read Brian's post.

On a slightly related note, the Joongang Daily recently reported on the current plight of English Villages across Korea

The first English village was established in 2004 in Ansan, Gyeonggi, by provincial Gov. Son Hak-gyu. There are currently 32 English villages across the nation.

In 2008, there were 21 English villages and 430,000 people enrolled in programs. Even back then there were concerns that the market was too saturated, but 11 more were built. Last year, enrollment dropped to 300,000, according to the Ministry of Education, Science and Technology.

Sometimes more isn't better. Thinking of the Ansan English Village, incidents of sexual assault of students there and at Seongnam English Village in the spring of 2006 led the Gyeonggi-do branch of the Korean Teachers and Educational Workers Union to release a statement saying some rather unkind things about foreign English instructors - such as "because the English camp sexual assaults are a structural problem brought on by unverified native speaking instructors, such incidents could potentially occur at any time," due in part to their "relatively free attitudes about sex" - despite the fact that neither of the perpetrators were native speaking instructors (see here, here, and here). Good times.

A recent ad by Samsung (translated here) poked fun at a white guy's Korean-language ability and perhaps displayed his "relatively free attitude about sex" by having the last channel he watched on his Samsung TV pop up (while his Korean girlfriend is over) be an adult channel. I guess that's one way to shift what could be a positive portrayal of a white guy-Korean woman couple slightly over in the direction of "the twisted values of some white men" "reportage."

Perhaps the billion dollar hit Samsung just took in the US might reduce the budget for such ads in the future, unless, of course, Samsung is feeling vindictive.

It makes me laugh (ironically) that Koreans seem to think that having a degree makes you a qualified English language instructor - even though that degree may be a Bachelors in Art History.

The ad seems pretty benign to me. The stupid boyfriend/husband, smart woman is a pretty standard trope of TV commercials. There's an entire blog devoted to it. Surely the presentation of a white man/Korean girl relationship as a normal thing is more significant, and on balance, a positive thing.

The link to the teachers union statement is dead. Is this the same statement?

That's the same KTU statement that the article refers to, yes.