Concerns about foreigners in 1995

I stumbled across this August 28, 1995 Yonhap article about Seoulites' views of the foreigners in their midst.

As the number of foreign residents increases, there is concern about decadent, pleasure (seeking) culture

There is a great worry among Seoul residents that the increasing number of foreigners living in Seoul will lead to an influx of decadent, pleasure (seeking) culture.

This was followed by worries over problems with public order due to increasing crime, deteriorating working conditions of Korean workers, and the spread of infectious diseases such as AIDS.

As for what fields they would like foreigners to work in, 54% chose technically specialized jobs, 15.6% chose foreign language teaching, 14.4% chose simple laboring, showing that it was hoped they would enter the country to work at specialized jobs where cutting edge techniques could be learned rather than importing cheap labor from southeast Asian countries.

However, as to whether Seoul should adjust to globalization by hiring foreigners as public servants, 63.6% were opposed, showing an overwhelmingly conservative reaction.

Well, things have certainly changed in the last 16 years. One can certainly understand the aversion to pleasure seeking culture, since there's such a dearth of it here. Ahem. It seems a rather strange first worry though. One wonders what this survey actually looked like. It's interesting to see some of the same fears are still present: the fear of growing crime (despite the Korean crime rate being twice that of the foreign crime rate) and AIDS. Also interesting is the use of certain terms in the phrase "decadent, pleasure (seeking), low quality culture." "Low quality" (저질, 'low,' 'substandard') has been applied to foreign teachers by anti English Spectrum and their friends in the Korean media (for example Break News and New Daily), and also appeared on some of their posters, such as this one from February 2005: 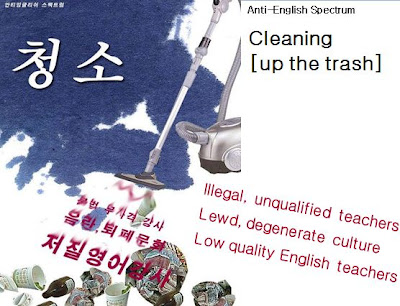 Note also the inclusion of "퇴폐," translated as 'decadent' in the Yonhap article above and 'degenerate' in the poster above. Such language was used by anti American, anti-USFK activists in the late 1980s to describe American culture, and by none other than Park Chung-hee in the 1970s (here, for example), who justifed his crackdown on marijuana and youth culture in general in 1975 and 1976 as protecting the indigenous culture of the Korean race. As it was put at the time, the “indiscriminate” acceptance of “degenerate fashions introduced from foreign countries” had to be stopped to “protect and develop our own cultural heritage.” It was made quite clear that it was American culture that was being talked about.

On the other hand, it's interesting that 88.2% of people thought human rights of illegally overstaying foreigners should be protected, though I don't know how deep that well of 'sympathy for illegally overstaying foreigners' was, especially since the Industrial Trainee System, which essentially mass produced illegal overstayers, would lead to there being over 200,000 of them 8 years later.
Posted by matt at 4:19 PM

Fascinating. Would be nice to know who was doing the polling (Yonhap? Seoul city?) and what the questions were. Hard to imagine it could have read: "With the increasing number of foreigners living in Seoul, are you concerned about the influx of decadent, pleasure (seeking), low quality culture?"