Reports on the bus incident

I was thinking just yesterday when writing my last post that with only 112 negative articles about foreign English teachers this year (up to yesterday), things had improved a lot over last year, when there were over 280 380 negative articles by year's end. I actually thought to myself, "There would have to be some big event to push the numbers up to the level of, say 2008." Needless to say, it's arrived.

As has been mentioned by the Marmot, Roboseyo, Metropolitician, I'm No Picasso, and David Wills, (go there for all the details) this was taken the night of August 27 on a bus to Bundang. The video appeared on the internet the next day titled "A swearing and mocking black person on a bus in our country," and it was apparently My Daily that broke the story of the video and the anger of the netizens who watched it around 5:30 pm on the 28th with an article titled "Netizens angered by foreign man causing disturbance and swearing on a bus." Many articles followed, including this one, the title of which says "Netizens in one voice say its unbelievable," which seems to be contradicted by this article, which says that there is a division amongst netizens between "Anger vs refraining from rash judgement."

These reports continued until Newsis broke the news of his arrest, nationality, and job around 11 am on the 29th, followed shortly after by NoCut News, whose title said it all: "American English instructor booked for 'Bus elder assault.'" Report after report followed, with all the major newspapers, networks, and every dime a dozen internet 'news' site contributing, giving us - up to time of posting, 72 articles [the final total is 81] (!) (just mentioning the foreign instructor aspect) over the past day or so, which is certainly a record. As SBS revealed this morning, as of 5 pm yesterday, "Foreigner bus disturbance" was the most searched for term on a portal site: 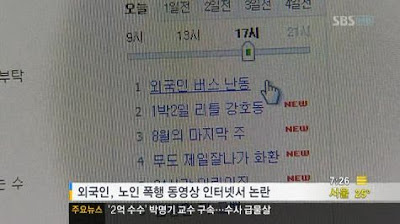 Some articles, such as this one by the Donga Ilbo , begin like this:

On the evening of the 27th on a bus headed to Bundang, American
English instructor H, because he had been told to 'shut up,' threatened
a man in his 60s before finally choking and punching him. Youtube capture.

A black American English instructor assaulted an elderly Korean on a packed bus, and a video of this has spread through the internet and caused outrage among netizens.

Another Donga Ilbo article mentions that he entered the country in February, while the Joongang Ilbo published his full name, and KBS reported this morning - in a six minute report - that he is still working at the hagwon he teaches at in Bundang. On the one hand, the report quoted the Metropolitician's post, specifically this part:

I don't condone this young man's type of behavior, BUT I UNDERSTAND IT.

I've been tempted a million times to react just like this, to smack the shit out of some asshole who just called me a name, a "nigger," or told me to get out of "his" country. Who sneered at my girfriend, scolded her for dating me in front of me, or as were the cases for friends of mine who've had it worse, had their girlfriend/wife cursed at or even assaulted by just some drunk ajussi or grandpa.

But just when you think they might be trying to be even-handed, they say, "The problem of foreigners assaulting Koreans does not stop there," and bring up the assault on a Korean man in his 50s by a foreigner caught on video last October in Itaewon. Hey, as long as there's a clear pattern, right?

There were several articles later yesterday which speculated about the cause of the incident, such as the Kookmin Ilbo's "‘니가’를 ‘nigger(깜둥이)’로 알아듣고… 외국인 흑인강사 버스서 60대 남성 폭행." The police booked him without detention the other day with plans to bring him in today for further questioning, which led to several articles this afternoon starting with Yonhap. One of the articles is described at the Marmot's Hole, and says that when the foreigner was told to 'shut up' by the elderly man, he thought the man was disparaging black people (putting the 니가' fable to rest). He also said he was wrong and wants to apologize.

It's very sad to this this incident occur let alone be caught on film and posted on the internet.

My guess is that this was the 'straw that broke the camel's back' moment for the American guy.

Can you save that joongang site somehow and I'll somehow try to contact the guy and let him know that maybe he can sue them for printing his name on the Internet.

If anyone were able to contact the guy perhaps a better suggestion would be instructing him in how to do a formal Korean style apology as described by TheKorean here. And having some press at the event wouldn't hurt.

Can we please not drive any traffic to David "Koreans are rice-tards and peasants" Swills?

It may have been the straw that broke the camel's back, but his behavior was unforgivable, period. It's the sort of thing that makes me feel embarrassed to be an American in Korea (and glad to no longer be an English teacher).