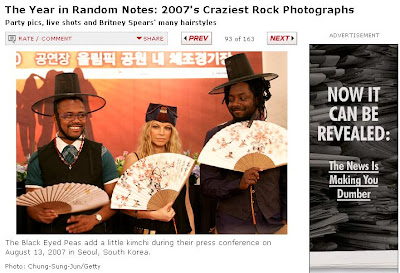 Not much more to say about this Rolling Stone photo than, "Well, you wanted to dress every foreigner you could point a camera at in clothes you yourself wouldn't be caught dead in 360 days a year."

I don't know how the Black Eyed Peas (is that like a black pearl?) felt about their hanboks, but at least one visiting foreigner was quite pleased with his:

When she created the outer jacket for national leaders participating in the Busan APEC conference of 2005, U.S. President George W. Bush took his jacket home with him, saying he loved the softness and color of the fabric. 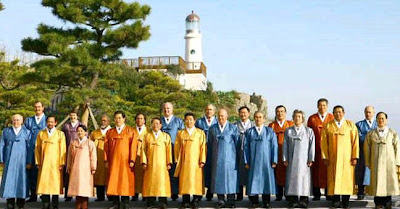 Where's Bush?
I was chatting with an American who wears a hanbok daily (no, not the Marmot), and he mentioned that when he started working for a government office, they had to change the rules - which required that a suit be worn - to accommodate him wearing their traditional clothing. It was something he chuckled about, because he knew there was no way they could not allow him to wear Korean Traditional Clothing. It would be like rejecting their own culture, like having to look at a map with "Sea of Japan" on it every day.

By the way, aren't these school uniforms, of a style introduced somewhere between 1910 and 1945, just smashing? 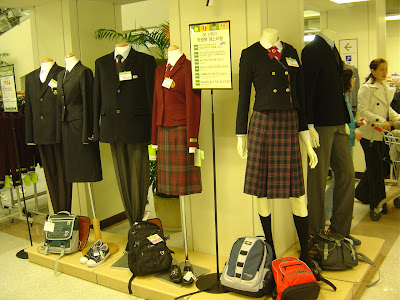 Where's Bush? I hope he's back in Texas now, pardner...

I like the girls' skirts, even if they are old fashioned. Yumm