[Update - regarding the protests, Gord has a great post here.]


Here are a few history-related articles that may be of interest:

The Joongang Ilbo has an article (may crash firefox) which looks at the actions a hundred years ago of Ernest Bethell and Homer Hulbert. If you don't know who they are, it's not a bad place to start, and the photos are pretty cool (especially the one of people attending his funeral (if that's actually what it is).

Brian also posted a link to scans of a 1919 National Geographic article about travels throughout Korea, which is full of photos and tales of travels in the northeast of the the peninsula. As it turns out, a pdf can be found here. Kudos to Dave's ESL user bluelake for posting these.

At Frog in a Well Korea, Konrad Lawson looks at Gregory Henderson's reports from Korea in the 1940s and later, while Robert at the Marmot's Hole presents photos of colonial era fascist-inspired buildings at the Seoul National University of Technology in Nowon-gu. Especially cool is Daeryukgwan Hall, which in this photo looks like a robot about to swallow you whole.

I took a look at how the photo below came to be taken during the Kwangju Uprising in this post. 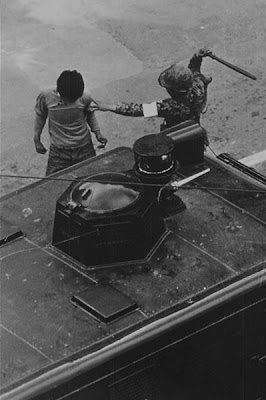 The Hankyoreh decided to appropriate this image to describe the behavior of riot police this weekend (found via Brian's post): 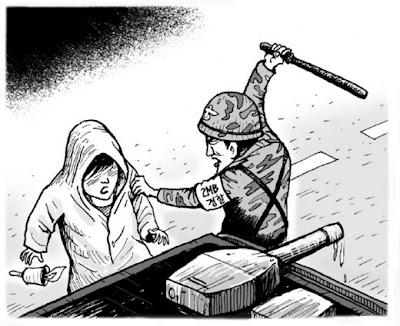 The candlelight protests for renegotiation of the U.S. beef and the government of Lee Myung-bak grew violent over the weekend, with riot police beating protesters with shields and truncheons, and in some instances trampling them down. The government is even said to be considering the use of tear gas, which has not been used since the brutal oppression carried out by the government during the Gwangju Uprising of May 1980.

The cartoon is a re-drawing of a photograph taken during that time - with one important exception. In the cartoon, the armband reads, “The Lee Myung-bak Police.”

Tear gas hasn't been used since the Kwangju Uprising? Sure it hasn't. And during the Kwangju Uprising, soldiers beat people to death and severely injured people with their batons, stomped people to death, bayoneted them, and fired into unarmed crowds (and passing vehicles) with M16s. Why, that's exactly what's happening now, isn't it? However bad this sounds, it still doesn't compare to May 1980.

Let's not forget the Hankyoreh's cartoon from May 17: 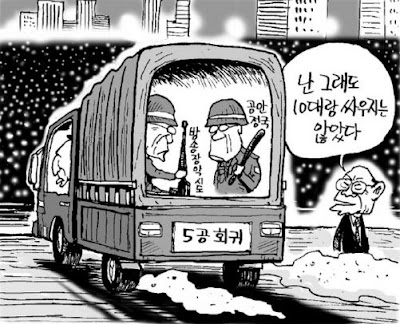 As I looked at before, we see President Lee Myung-bak loading troops on the “Back to the Fifth Republic” truck (a comparison the Hankyoreh is using to stress his authoritarianism) while Chun Doo-hwan tells Lee Myung-bak that he “never got in fights with the teenagers.” As I mentioned in my last post, Chun did indeed get into fights with teenagers, killing dozens in Kwangju, but I didn't have any stats at the time. I do now (though they're a decade old and don't take into account bodies that have been discovered in the last 10-15 years): At least 37 teens (or younger) died in May 1980.

Another Hankyoreh editorial describes the violence on the morning of June 29 and makes a comparison: "It was just like the Gwangju of May 18, 1980, without the gunshots." Actually, there were no gunshots on May 18, 1980. Perhaps they meant "without the bayonets." The editorial continues:

The indiscriminate violence began again exactly 21 years after June 29, 1987, when the military government of Chun Doo-hwan, which had committed the atrocities in Gwangju, finally surrendered to the country’s demands for democratization. Did the clock get turned back a few decades to the past?

It's pretty easy to see that, in its rush to demonize Lee and the police, the Hankyoreh has decided to compare them to the 386 generation's darkest memory: the brutality and authoritarianism of May 1980. This knee-jerk political use of the uprising's memory (perhaps helped along by the simplistic movie about it(May 18) released last summer) reminds me of the use of Hitler and Nazi Germany as the symbol of ultimate evil in the west, whether a comparison to them is warranted or not.
Posted by matt at 2:59 AM

For what it's worth, the police stopped using tear gas in 1998, shortly after Kim Dae-jung came into office. DJ ordered the cessation of the use of tear gas to suppress demonstrations.

I'd figured it was in the mid-to-late nineties some time, but didn't know when exactly - thanks.

Matt, when I first came here in 1996 I saw the police use tear gas at a demo in Myong-dong.

On Saturday night, I saw several police with bleeding faces, or getting pummeling by protesters. Apparently Hankyoreh's righteous indignation over "violation of human rights" does not extend to 21-year-olds fulfilling their compulsory military service.

Just as there is Godwin's Law ("reductio ad Hitlerum"):

It seems there is now Hani's Law: As soon as hyperbolic comparisons to Kwangju are being made, they have essentially lost whatever argument they were trying to make.