The Korea Times reported today that the number of suicides in subway stations is expected to increase this year:

So far this year, a total of 22 people committed suicide by jumping on subway tracks in Seoul and the metropolitan area, according to Seoul Metro and Seoul Metropolitan Rapid Transit Corporation, or about four people a month on average. The number is a 30 percent increase from the same period last year. In 2006, the figure stood at 34.

The most recent suicide occurred around 2 p.m. on June 17 when a man in his 30s threw himself onto the subway track at Gunja station on subway line 5. This month alone, five people have killed themselves on subway tracks.

That the Korea Times (and the Chosun Ilbo, in its Korean edition) used the graph below to illustrate the projected rise is a bit silly, seeing how, if they had started with 2003, the 2007 figures would still seem low; the graphic doesn't really seem very helpful. 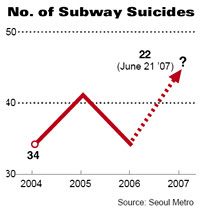 The station with the most suicides during the period was Guui Station on Line 2: a total of six people killed themselves by jumping on the tracks there. Noryangjin and Songnae stations on Line 1, Kkachisan and Gunja Station on Line 5 and Hansung University Station on Line 4 are also popular with suicides with five each. The common factors are that there are fewer distractions because there are not many passengers, and that they are in lower middle-class areas.

I don't know all of those stations, but, to judge by the presence of new apartment complexes nearby, Noryangjin fits that description (not for long though, as a new town is headed its way), as does the Kkachisan Station area (which is also likely getting a new town). Songnae Station in Bucheon, on the other hand, has large apartment complexes nearby, though the husband of a former coworker witnessed a suicide there back in 2002.

Since the train yards and offices for line 5 are found in Banghwa-dong, I've had several students over the years who worked for the subway in some capacity (as drivers or engineers). One engineer told me that he has to examine Magok station every night to check for structural flaws. What's interesting is that Magok station is in the middle of farmland at the moment, so the station isn't open. According to him, two people have killed themselves there in the past; if you want a station with "fewer distractions" and "not many passengers", I guess it would be hard to beat Magok station (most of the blogs in this image search at naver have some good photos, especially the fifth entry, which shows the station's construction back in the early 90s).

Most of the suicides were unemployed or suffered economic hardship. Most were in their 20s to 40s, and men vastly outnumbered women. According to analysis of 300 train suicide accidents from 2003 to 2005, 70 percent were unemployed. Some 216 men committed suicide, three times the number of women, which was 85. By occupation, 24 were factory workers, 13 were office workers, six were public employees, and four had their own business.

The article goes on to tell us that the appearance of screen doors in subway stations have ended suicides there, but that "Of the 256 stations in Seoul and metropolitan area, only 20 or less than 10 percent have screen doors." You'd think the advertising possibilities these screens present would make them affordable in the long run; when they first appeared at Yeongdeungpo Gucheong station they were covered, for the entire length of the station with ads for a single product.

Some experts say changing the atmosphere in stations can also prevent suicide. Dr. Nam Yoon-Young of Seoul National Hospital said, "People commit suicide in places and times when there are fewer people. They could also be discouraged from suicidal thoughts by music or signs."

Somehow, I don't think music or signs are going to make a huge difference to someone who's decided to kill themself. I doubt they would have dissuaded this man: 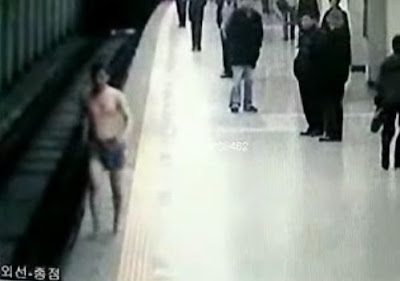 This was taken in Wangshimni station in January; for those with morbid (or sociological) curiosity, a video taken from CCTV cameras is here. In fact, numerous videos of suicides (all blurred) can be found over at naver.com, including one where two men jump down and pull a suicidal man off the tracks seconds before the train arrives.

Seeing as I once knew a subway driver, and having seen a few of these videos, something came to mind that the Korea Times mentioned:

The increasing number of suicides at subways also leaves irreversible trauma to train drivers, which is emerging as a serious social problem, according to Kim Hae-gon, a subway expert.

It can't be a very pleasant thing to witness from the driver's seat.

When I was in Sinjeong station (next to the aforementioned Kkachisan station) a few weeks ago I saw these emergency evacuation ladders (which I haven't seen elsewhere) and wondered if they were for people who'd fallen on the tracks, or something of that sort. 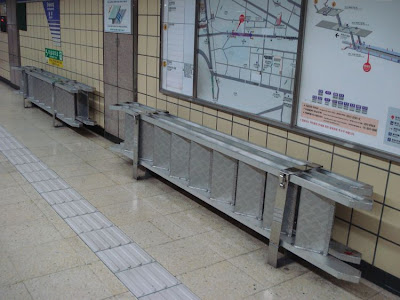 The guide below suggests that fires or terrorist attacks (etc.) are what whoever put them there had in mind, though it would seem that, according to the stats above, a person jumping onto the tracks is a much more likely occurence than a fire or terrorist attack. 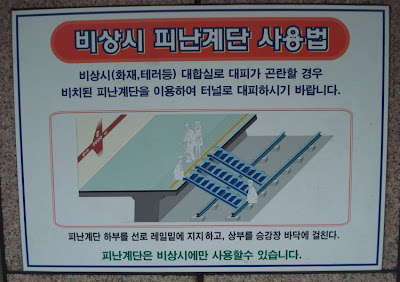 One would hope a suicidal person wouldn't use these to make his or her descent onto the tracks that much easier.
Posted by matt at 2:21 AM

Great posting....appreciate the pictures and such but several links don't work - apparently they have been removed from the site or there is something wrong with my connection here.

Strange... one of the links didn't work for me (the naver search with all of the subway videos - I fixed it), but everything else did. I find Korean blogs to be difficult to link to sometimes, however.

MEntioning the music reminds me of some stations that play classical music. I didn't know it was for suicide prevention. Helped me wait for my train though without feeling anxious.