Last Saturday I headed down to Chungcheongbuk-do (North Chungcheong Province) with some friends, one of whom hails from there. It wasn't the best day for sightseeing: 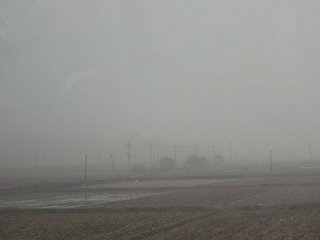 The above photo was taken from the car in either southeastern Gyonggi-do or northern Chungcheongbuk-do. After spending hours in traffic, we finally made it to Chojeong-ri, where we spent about three hours at this jimjilbang, which was popular because you could bathe in the mineral water the area is known for - a relaxing antitode to the hours spent in traffic. 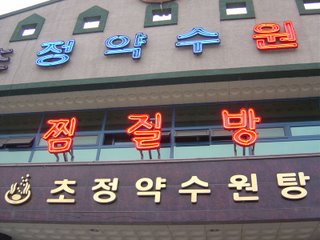 We spent another hour en route to Cheongcheon, a small town which reminded me a lot of where I grew up. 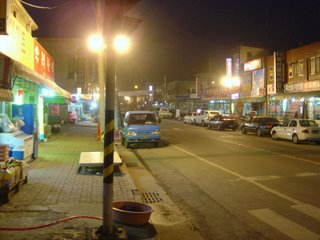 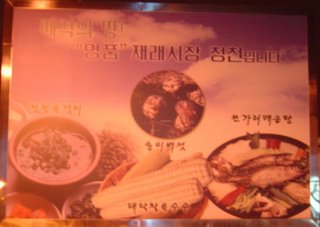 We stopped in at the Cheongcheon yangjojang (a makkeoli distillery (or is it a brewery?) and picked up a couple bottles. 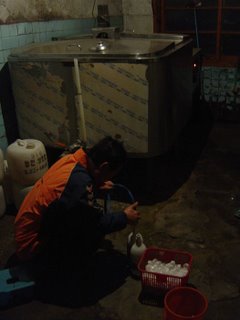 I nabbed the label before the bottles were tossed out the next morning.

I got to enjoy it with the samgyeopsal we bought at a butcher shop in Cheongcheon. 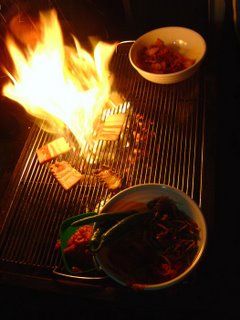 I'm normally not a huge fan of samgyeopsal (too much fat) but grilled for 30 seconds in the flames of a charcoal fire, it tasted really good. The Makkeoli was tasty as well, and most importantly, did not lead to a headache-filled morning the next day. The next morning was when I took a picture of this river, from the balcony of my friend's house. 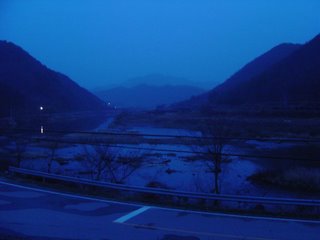 What river is this, you may be wondering (ok, you're probably not!)? It's the Namhangang - the south Han river - the one that Seoul Mayor Lee Myong-bak wants to connect to the Nakdong river by building a canal. [Correction - this is not the Namhangang, though I was told it was.] 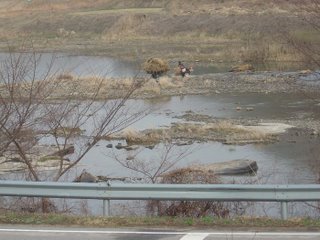 Could you send cargo carrying vessels through here? After having some duk mandu guk, we headed for a hike along a river, and ended up at Mireuk Mountain Fortress in Goesan-ri, the ruins of a Goryeo fortress, which has 3.7 km of man-made walls (the rest utilizes cliffs, which is pretty easy to do, i imagine. Boulders the size of small houses were strewn across the valley and mountainside. 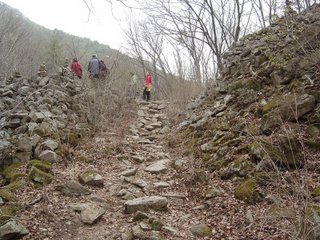 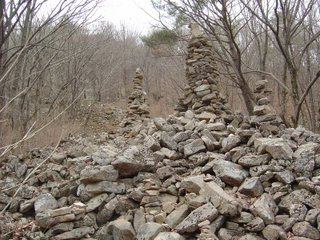 Following a river, we made our way up to the top of a mountain (I forget the name now) but there wasn't much to see, due to the remnants of the yellow dust. On our way back down, we got rained on for half an hour. We had passed a military camp on the way up (there was only a single roll of razor wire separating us from the soldiers' tents, which were about 10 feet away(!)) and on the way back, heard automatic weapons fire before we came upon soldiers practicing in a small clearing in the forest (I'll assume they weren't using live ammunition). We stopped in for some tasty maeuntang (the local specialty!) and tried Siwon, the locally produced Soju. It was actually quite good - a lot better than Chamiseul. 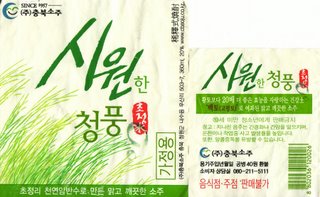 It was made in Chojeong-ri, the place where we went to the jimjilbang. We stopped there to fill several empty water bottles with mineral water. While i was waiting, i saw this poster. 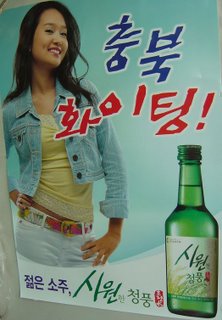 There's not much more to say than that it's always good to get out of Seoul, where you're much less likely to find Chungbuk - Fighting! posters...