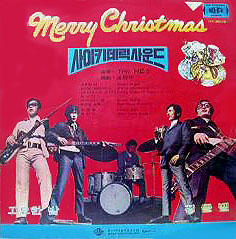 Update: Antti found the site linked to below quite some time ago. Also, a recent article on Patti Kim makes reference to her debut in 1959 on stage at a US Army base.


I pulled out some Sanulim cds that I bought last year and as I was listening to them again, decided to try to more information on the band. Luckily, I came across a link to a great site about Korean psychedelia and folk from the 60s and 70s, which has a biography of the band. I was shocked to learn that once upon a time, in 1977, Sanulim sold 500,000 copies of its first album, which is full of stripped-down, fuzzed-out guitar rock. The band only enjoyed this popularity for a short time, before 'dance music' became popular, but the idea that a band like Sanulim was popular seems almost inconceivable in this age of idols and manufactured, disposable pop bands. The thing about Sanulim was that they didn't sound like anyone else at the time - the site says critics said they sounded like they 'dropped out of the sky'. A diagram, followed by commentary, explained this: 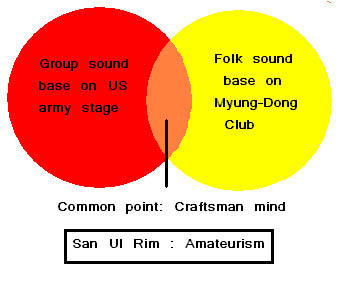 The 1970s Korean music scene was divided into two parts. One is the Group sound (Rock band style) based on the US army stage circuit and the other is the folk sound base on Myung-Dong club. The goal of the former is a superb performance (technical skill and accurate copying ability of western classic rock numbers) while the latter had much more importance in personal expression. But both of them had the common point that the craftsmans mind was strictly trained. But San Ul Rim’s music style didn’t belong anywhere (in these 2 parts).

Now, my first question was: "US army stage circuit?" I was really curious about the influence the USFK might have had on Korean rock music. Another page on this site had some more information, regarding the genealogy of a band called He5, a member of whom came from a band called the Key boys, which had

played some 'Package shows', under the name of the Lock & Key in the stages of the 8 th U.S army which settled in South Korea. Also they played at some new venues like 'Music listen Rooms', 'Live Music Salons', or the traditional ones like in Cinema.
[Cf. At that time the concert was held frequently in Cinema Houses. It was called as 'Cinema Show].

With these latter [venues] they were known to general 'Korean' public... (Cf. Because the stages in 8th Army of U.S. was for the Korean in the forbidden area for the evident reason of security. So generally a Korean group or artist who played there was a totally unknown figure to general Korean public).

It goes on to say that the Key Boys broke up (one member joined the Korean army's entertainment unit, which was sent to Vietnam) and He5 was formed by Wha-Yang Entertainment Inc, which managed several bands and picked guys from the different bands to be in this 'supergroup' (management and record companies putting together bands? Sounds familiar...). It also mentions that "Wha-Yang Entertainment Inc. was one of the enterprises who dealt with matters concerning the distribution of musicians and entertainers for the 8th Army of USA.- with Universal, Dae-Young, Dong IL." He5 apparently played often in Itaewon. The article says that their live shows were 'heavy and psychedelic' but that the record company wouldn't let them make such records in the studio. On the other hand, the Christmas Album with the 'psychedelic sound' pictured at the top of this post has a 13 minute version of 'Jingle Bells' mixed with 'In-a-gadda-da-vida', and my heart just breaks that the 'Listen' link is broken.

Now, I was vaguely aware of the Myeongdong folk music scene, as well as the history of Itaewon (mostly due to the article 'Itaewon as an Alien Space within the Nation-State and a Place in the Globalization Era'), but I knew nothing about the 8th Army touring circuit, so now I'm intrigued and want to learn more about the effect of the USFK on Korean rock'n'roll. The effect of the US military presence on Japanese and German popular culture is a little better documented, but I don't know how much this has been looked into regarding Korea.

Well, if a Chosun Ilbo article posted today is anything to go by, it would appear North Korea has been aware of the US army's effect on Korean music for some time now:

The U.S. military in South Korea spreads “Yankee culture and all sorts of social ills,” North Korea's state-controlled Pyongyang Broadcasting has claimed. In a program on Wednesday, the broadcaster ... blasted the USFK for spreading "decadent music," citing the corrupting influence of blues and rock and roll in the 1960s, soul in the 1970s, disco in the 1980s and rap in the 1990s.

Ironic I would read this article and discover this psychedelia site on the same day. One question I wonder about - how available was US/UK rock music in Korea in the 1960s and 1970s? Was the USFK the primary conduit for rock'n'roll in Korea, or was edgier American rock music available on Korean record store shelves at the time? Anyone know?
Posted by matt at 4:12 AM

hey if you like sanulim music, one of their band members Kim Chang Hun just released a brand new album titled "The Love"... you can purchase it at http://www.yesasia.com/us/kim-chang-hun-vol-1-the-love/1019602614-0-0-0-en/info.html