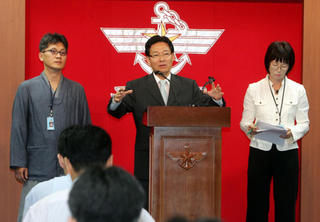 Update:
I found an issue of the Korea Journal (from 2002) which has several essays about "Settling the Past". Anyone interested in this will find lots to read there.


At a press conference on Monday, the Defense Ministry announced that a truth commission will investigate some of the darker episodes that took place during the decades of military or dictatorial rule in Korea. Eight episodes will be investigated in two rounds of investigations.

In an article misleadingly titled 'Panel to investigate four past military incidents in '70s-'80s' (only four?) the Korea Herald reports that

The panel, "Truth Commission on Past Military Incidents" consisting of 12 members - 7 civilians and 5 Defense Ministry - was launched in May as part of efforts to shed light on unjust history, a key agenda of President Roh Moo-hyun's administration. The panel aims to investigate questionable deaths and abuse that occurred during the military dictatorships of the 1970s and 1980s.

The chairman of the panel visited the Defense Security Command yesterday, which retains records of past military events. The DSC announced that "We will actively support the disclosure of reports that the Truth Commission Panel requests, in order to uncover the truth about past suspicions".

"We aim to clearly disclose before the public the past wrongdoing committed by the military so as to prevent the recurrence of such misconduct and lay the foundation for the military to receive greater public affection and confidence," said Lee Hae-dong, head of the panel.

(The Korean version of this article has a different photo than the one above - that of Chun Doo-hwan speaking as head of the Joint Investigation Headquarters, which was formed to investigate Park Chung-hee's murder - and from where he was able to maneuver his way into power). The Chosun Ilbo, in an article titled 'Defense Ministry to Review Gwangju, 1979 Coup', continues:

"We considered whether the incidents occurred in the process of the military intervening in politics and whether massive violations of human rights took place against civilians” when determining which incidents to investigate, a commission member said.

The first round of investigations will look into the rise of the Chun Doo-hwan regime, including the 1979 coup, the May 17, 1980 declaration of martial law and the May 18 democratic uprising in Gwangju the same year. It will also look into the Samcheong Re-education Program, the so-called "Nokhwa” or “greening” project of recruiting college activists, and the Silmi Island revolt.

The second round will look into the government's Oct. 27, 1980 clamp down on Korean Buddhists, the forced merger and closing of media companies and firing of journalists, military investigations of civilians during the Chun and Roh Tae-woo administrations, and suspicions of trumped-up spying charges against Koreans in Japan.

The Herald article provides further descriptions of a few of these incidents, like the 'Nokwa' project,

the alleged forced conscription of student activists by the former military regime led by President Chun Doo-hwan...Chun allegedly recruited around 1,100 students whom he considered dangerous to his regime between 1980 and 1984. They were brainwashed or forced to spy on other student activists or activist groups, and ordered to collect information about anti-state activities pursued by fellow students. The panel will probe into who led the conscription and how 6 students died in the process.

Another military abuse under investigation includes the so-called 'Samcheong' incident in which the government arrested around 60,755 alleged criminals in 1981, in the name of uprooting disorderly elements from society. These people were forced into labor, assault and suffered human rights violations. Around 54 people are known to have died in the process, but human rights committees suspect the death toll is much higher.

Of the Silmido incident, (which is well known due to the second most successful film in Korean history being based on it) the Herald tells us that "the panel will attempt to identify the secret agents and uncover the process of their recruitment and where their bodies are buried."

Though the focus on Kwangju will be to determine who gave the order to fire, the Chosun Ilbo article ends by telling us that

The incidents involving the Chun Doo-hwan regime could prove a hard nut to crack. In the case of the bloody crackdown in Gwangju, hearings on the matter in 1988 failed to establish who gave the order to fire, and if those involved continue to keep their mouths shut, the probe could hit a brick wall.

The truth commission also lacks the authority to force figures to appear for questioning and will thus find it hard to investigate key figures in Chun's "New Military Group."

This website has some information about the 1988 hearings on Kwangju:

In August 1988, opposition legislators managed to form the Special Investigative Committee of the May 18 Kwangju Pro-democracy Campaign within the National Assembly, to conduct an inquiry into the government cover-ups. The committee found that 77 of the officers who had led the crackdown against the uprising had been decorated.

In 1989, the National Assembly investigations into the Kwangju uprising took place on a full scale when the hearings of the Special Investigative Committee opened in the spring. The victims of the military crackdown and the army officers involved were summoned for testimony. Their testimony was televised, live. The army officers had become senior officials in the government. Chun Doo-hwan was also summoned, and he testified on December 31. Due to its limited powers, the Committee could only publicize the proceedings, not prosecute those responsible. Attempts to introduce laws to punish the perpetrators of the Kwangju massacre were unsuccessful due to the power of the ruling party in the National Assembly.

From the wording of the above paragraph, ("summoned for testimony") it sounds like the 1989 hearings did have the authority to call people to testify, even if they kept their mouths shut or lied on the stand (This book picks apart some of their testimony by comparing it with contemporary military records regarding Kwangju). This testimony and the existing documents were compiled into the 'Complete Collection Of Historical Records of The Kwangju May People's Uprising' (광주오월민중항쟁사료전집) back in 1990. So while this is not the first time Kwangju has been investigated, questions linger, especially considering Chun Doo-hwan and Roh Tae-woo were not found guilty of murder during their 1996 trial. Existing evidence suggests that the orders were coming from the top, but there is no way to prove this. If they are actually hoping to answer the question of who gave the orders this time, when they failed to last time, you have to wonder why they made this commission more toothless than the previous one.

The other incidents should be investigated as well, expecially considering the numbers of people involved in the Samcheong and Nokwa cases, and the number of deaths that resulted. Of course, the Defense Ministry isn't the only government ministry investigating its past right now. The Yonhap article reminds us that

In a separate development, the National Intelligence Service began probing past questionable incidents involving its former agents [something it announced back in February]. The cases include the death of its former chief Kim Hyung-wook in 1979, the kidnapping of then opposition leader Kim Dae-jung in 1973, the mid-air disappearance of a Korean Air passenger jet in 1987 and the execution of eight student activists in 1974, only 20 hours after they were sentenced to death [which has become the basis for both a novel, and perhaps a future Park Chan-wook film].

(The related articles to the right of most of the above linked articles are well worth reading, especially regarding the investigation into the death of the former KCIA head.)

A lot of people were victimized in the historical events which are being investigated by the Defense Ministry and the NIS, and I imagine these people, or their families, might be relieved to see the names of their former torturers, or the names of those that caused their family member's deaths, brought to light. Not everyone agrees that this is a good idea, at least judging by the debate a post on this subject by the Lost Nomad has caused. I think it is, as these events have been hidden from the public for too long. Hell, it took a movie being made about Silmido to really bring that incident into the public eye, and the Defense ministry panel now wants to learn who the Silmido operatives were and where they were buried. Whether such documents exist after 34 years is another question entirely, and is another reason to hold these investigations now. The most recent events occurred 20 years ago, and waiting longer will just make it more likely that those who were making the decisions will no longer be around. Not that these people will necessarily talk now, but in 10 or 20 years it may not even be possible to try. Of course, considering how toothless these commissions seem to be, they may not even be able to accomplish some of the simpler tasks they've set out for themselves, especially if they have to rely on possibly nonexistent documents.

As a postcript, I should mention that there is another government commission reconsidering the past, which is referred to in this August 18th Joongang Ilbo article titled 'Two leaders of 1980 strike deemed freedom fighters':

On Monday a government commission made the controversial decision to recognize two leaders of a violent 1980 labor strike as freedom fighters. The two men, Lee Won-gap and Shin Gyeong, led a four-day miners' strike known as the Sabuk Incident. That strike, during which hundreds of miners briefly seized control of a Gangwon province town, is remembered as having launched nearly a decade of strikes under the military dictatorships of the 1980s.

"The Sabuk Incident started out as a labor strike, but because it was carried out under martial law, it can be seen as an act of resistance against the authoritarian regime," said a staffer for the Commission for Restoration of Honor and Compensation for Democratization Movement Activists.

The commission, which was launched in 2000, is charged with investigating the history of the pro-democracy movement since 1969, redeeming the reputations of activists who were unjustly charged with crimes and providing financial compensation when merited. The commission's nine members are appointed by the president, the National Assembly and the chief justice of the Supreme Court. To date, the commission has awarded 22.4 billion won ($22 million) in compensation.

Some observers have said extending its mandate seems more likely since President Roh's speech Monday, in which he called for changing the statutes of limitations for crimes committed by the government.

(Oranckay makes a mention of this call for the change in the statute of limitations here). While designating striking miners as freedom fighters may push the limits a little (but I'll agree with it, considering the influence of their struggle), I don't know what to make of the attempt to rehabilitate Kim Jae-gyu (Park Chung-hee's assassin) as a martyr for democracy. I'm not sure if being 'not as bad' as everyone else makes you a democratic martyr, especially when we have only Kim's word that this was his intention.