The 1968 Blue House raid, seizure of the USS Pueblo, and anti-US demonstrations

For my latest Korea Times article, I look at reactions to the Blue House raid by 31 North Korean commandos seeking to kill Park Chung-hee and the seizure of the USS Pueblo by the North Koreans, both of which took place 55 years ago this week. (More about the 'digit affair' involving the Pueblo prisoners can be read here.)

Last year I began reading through the Korea Times looking for articles about these events and found all sorts of interesting material, including citizens' tales of encounters with the North Korean commandos, some of which turned out tragically, such as the case of a middle school boy killed by a stray bullet. 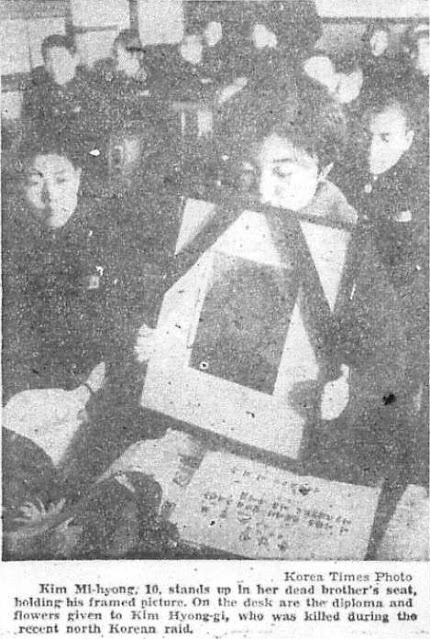 16 year-old Kim Hyong-gi's family accepted his diploma at the graduation ceremony a week after his death, published in The Korea Times Jan. 31, 1968.

Other articles talked about the earlier curfew, and the lack of late night merrymaking taking place even after it was lifted because people were so shaken.

But what really made my jaw drop were the demonstrations. Not the anti-communist demonstrations by students and citizens - those were par for the course. What caught my attention were demonstrations critical of the US carried out by students in front of the US Embassy and even at the Freedom Bridge in Munsan where US MPs struggled to stop students from crossing. I knew the only way these protests could go forth unmolested by police was because authorities were allowing them (if not encouraging them). What was going on?

I then dug and found that Park was furious at the differences in responses by the US to the Blue House raid and Pueblo seizure, as well as at American insistence that the ROK not retaliate and that it not take part in the Panmunjeom discussions over the Pueblo (because the DPRK would not allow discussions if the ROK was present - a deliberate attempt to divide the ROK and US). On top of this, Park felt personally slighted by the lack of concern shown by US officials regarding the attempt on his life. The media pushed the narrative of being disregarded by the US and public anger grew to the point that the anti-US demonstrations took place, so in response President Johnson sent Cyrus Vance (later Jimmy Carter's first Secretary of State) as his personal envoy to try to cool the situation and work out a deal to send more military support to the ROK.

It was when I decided to look up the declassified cables at the Foreign Relations of The United States website that I found a gold mine of material - 60 pages when gathered in a Word document - and both learned so much more but was then faced with the task of deciding what to include (which convinced me to put it off until the 55th anniversary to give me some time to do this).

Arguably the most jaw-dropping file was Cyrus Vance's personal oral report to President Johnson upon his (successful) return home, filled as it is with references to Park's drinking and instability, attempts by Korean cabinet ministers and the Prime Minister to get Vance to intervene on their behalves and rein Park in, and revelations about the ROK's own commando infiltration program which had sent numerous missions to the North.

Daniel A. O’Donohue, who had served as political counselor in the US Embassy in Seoul 1960-64, accompanied Vance and, in this diplomatic oral history collection, discussed his memories of the negotiations (pages 290-291):

In effect, what we were going to do was to secure South Korean agreement to operate within our framework. That is, no military actions. For our part we would visibly strengthen the South Koreans militarily. As I say, this negotiation continued through that week. Park was both genuinely but also tactically incensed. However, in the end, there had to be an agreement, however difficult it was going to be to reach it. Vance handled this negotiation beautifully, combining the grace and patience that was needed.

In dealing with the South Korean Foreign Minister, Vance allowed him to insert himself belatedly into the process although the details had already been agreed upon. The South Korean Foreign Minister wanted to get together with Vance to dot a few i’s and cross a few t’s. Well, nobody was happy about that, but Vance agreed. The Foreign Minister forced Vance into an all night meeting. With great patience Vance allowed the Korean side to tell him that this English word was better than that one and that he should put a comma here, etc. With immense tact Vance went through it all and managed both to endure this process, while preserving everything of substance.

Obviously, Vance worked out the final agreement with Park Chung Hee. Vance was able to deliver one of the great lines in diplomacy. You don’t often get a chance to do this. At the last minute President Park said that he wasn’t sure that he could agree. With utter charm Vance said, "Well, Mr. President, I have come here only to see if we could help you, and if you believe that this agreement doesn’t help you, so be it." Well, that took care of it. Park quickly agreed. In fact, the South Koreans had done pretty well.

Many things followed from the Blue House raid and Pueblo seizure. Park created homeland defense units of reservists and followed more militarist thinking in regard to citizenship and the role of students. The Charter of Education released in December 1968 "charged [students] with the historic mission of regenerating the nation" and urged them to "fulfil the responsibility and obligation" to "participate and serve in building the nation." Evasion of conscription would also, within a few years, become much more difficult. (Worth noting is that 1968 was also the year that Westernized youth culture began to take hold in South Korea, with the first nude happening being held, Hahn Dae-soo returning to Seoul, weekly magazines mushroomed, and the Pearl Sisters' first LP was released, which was the rock or soul LP to garner attention in the press and on the radio, so opposing trends began to take root at the same time.)

As for the USS Pueblo, it's still a raw topic for some. It now sits in the Taedong River in Pyongyang as a tourist attraction. Just last week the U.S. House of Representatives passed a resolution calling for its return. The DPRK's comment on the 55th anniversary was that it would wipe out "not only a port or an airfield of a warmonger or invader but their entire land if a second USS Pueblo enters our territorial waters again."

Below are photos from the Korea Times about these events (more political cartoons can be found here): 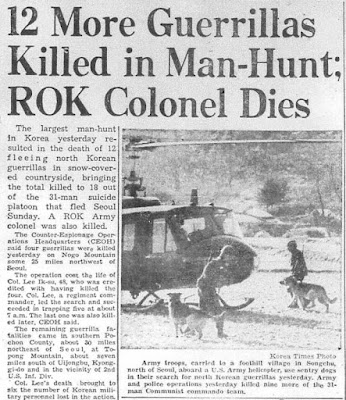 Manhunt for guerrillas, published in The Korea Times Jan. 25, 1968. 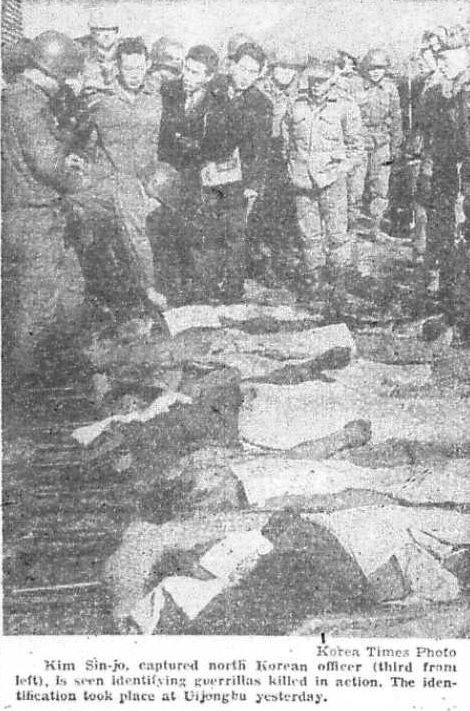 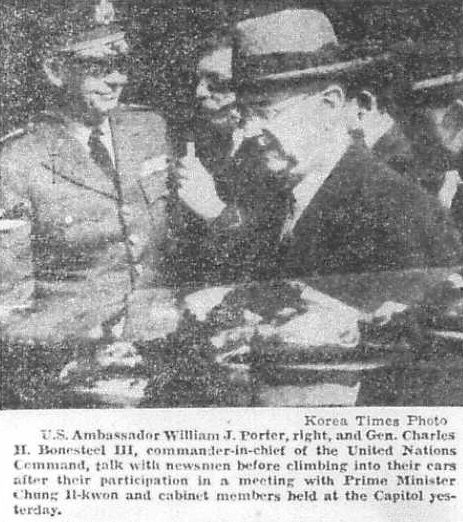 UN Commander Bonesteel and US Ambassador Porter, published in The Korea Times Feb. 7, 1968. 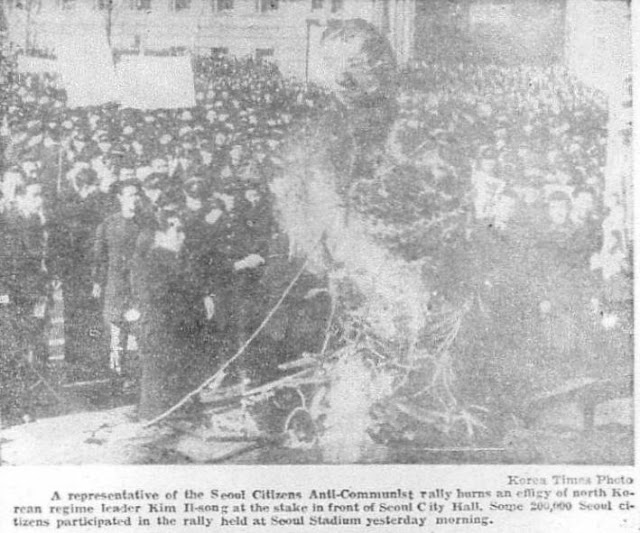 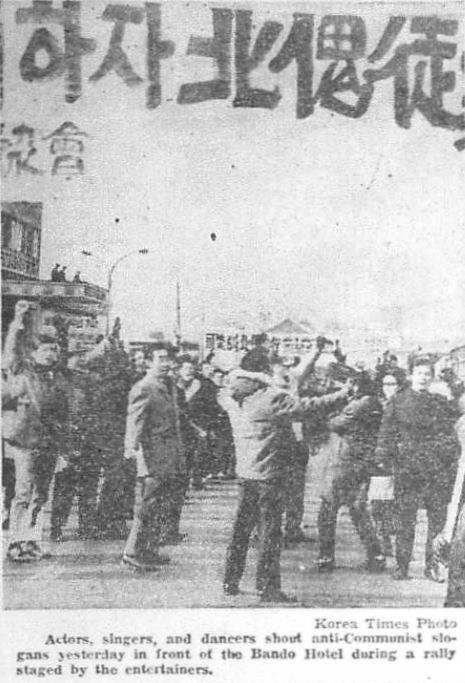 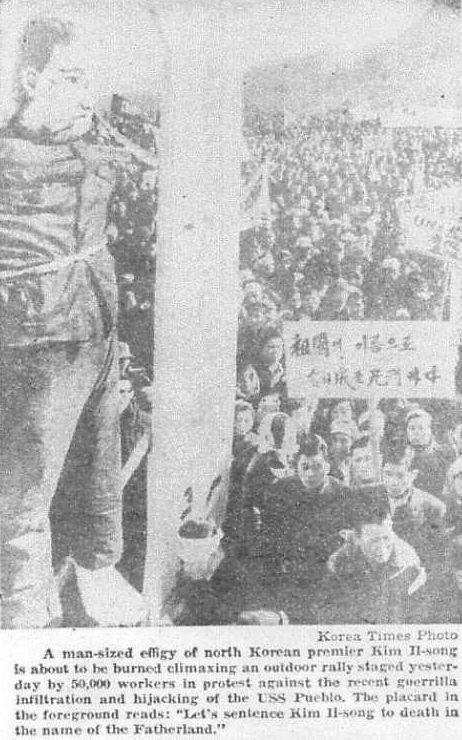 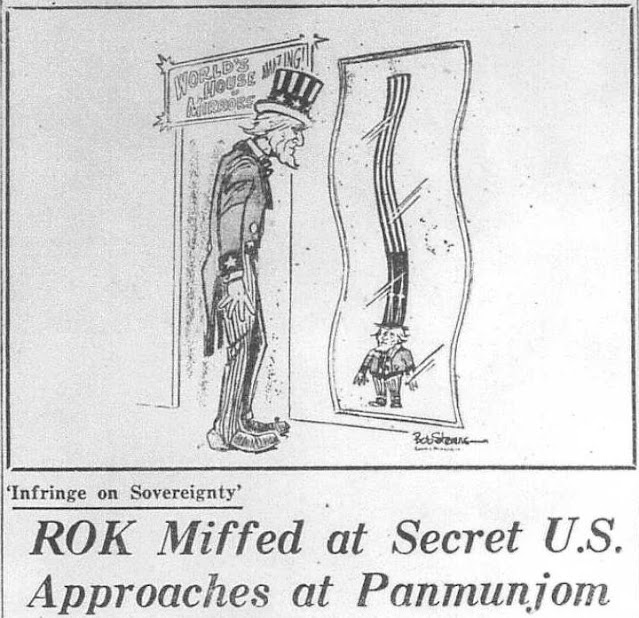 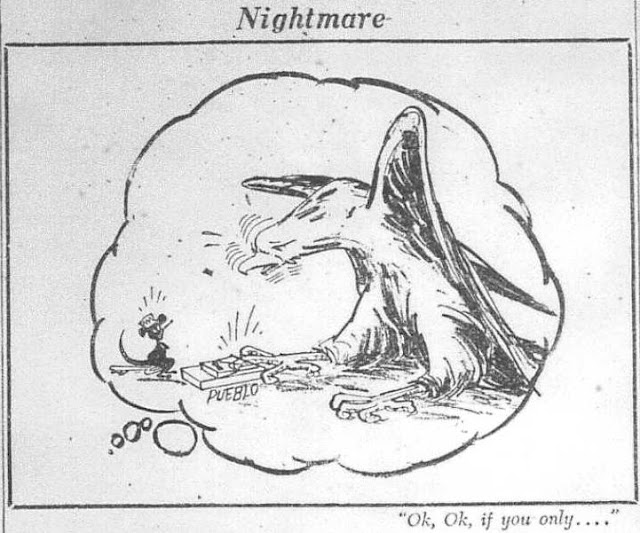 Cartoon on Pueblo seizure, published in The Korea Times Feb. 7, 1968. 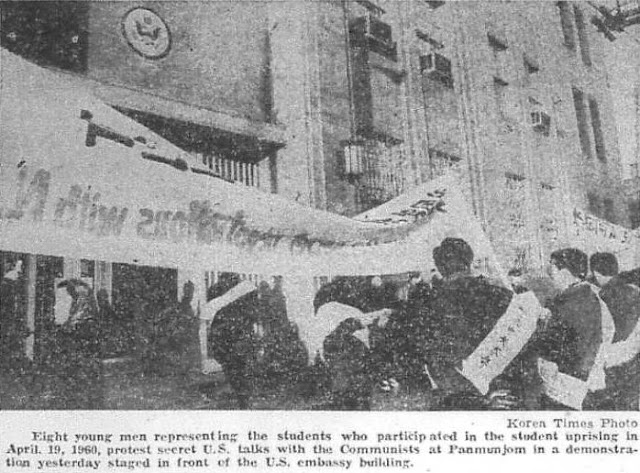 Students protest at US Embassy, published in The Korea Times Feb. 7, 1968. 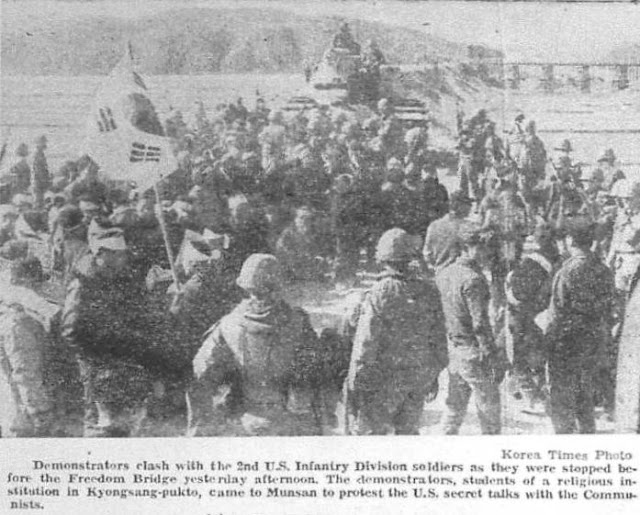 Students protest at the Freedom Bridge, published in The Korea Times Feb. 8, 1968. 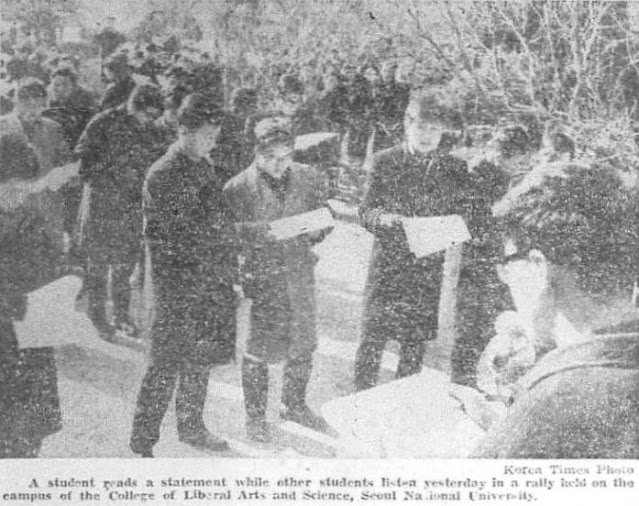 SNU students call for withdrawal of ROK troops from Vietnam, published in The Korea Times Feb. 9, 1968. 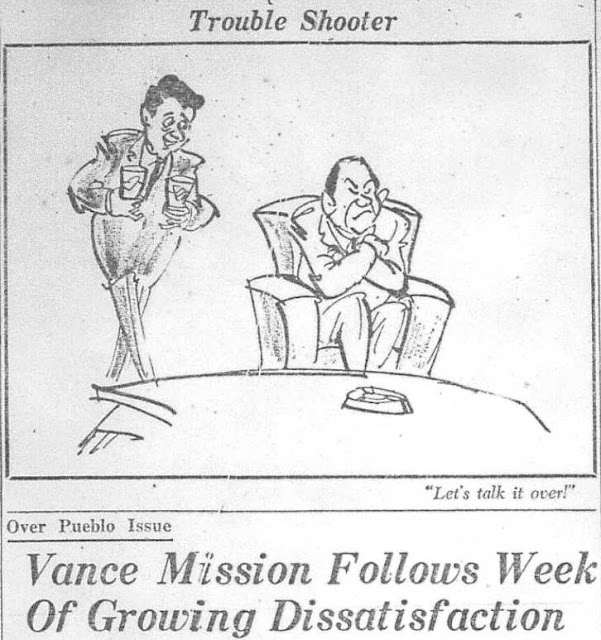 Cartoon predicts Cyrus Vance will have a hard time, published in The Korea Times Feb. 11, 1968.
(Perhaps Vance is worried about the ashtray.) 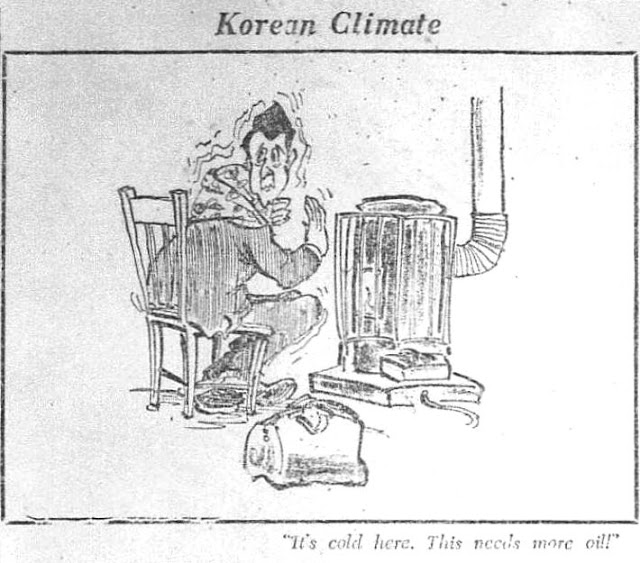 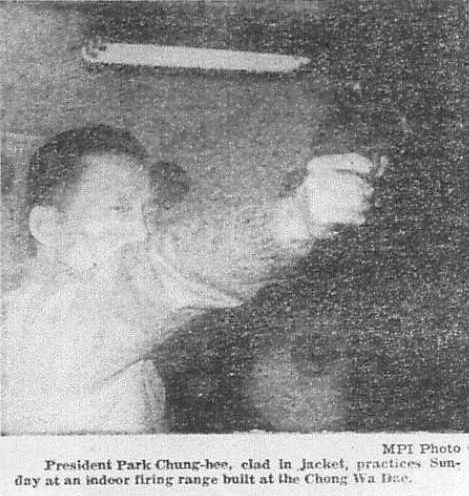 Park Chung-hee does target practice rather than meet Vance, published in The Korea Times Feb. 13, 1968. 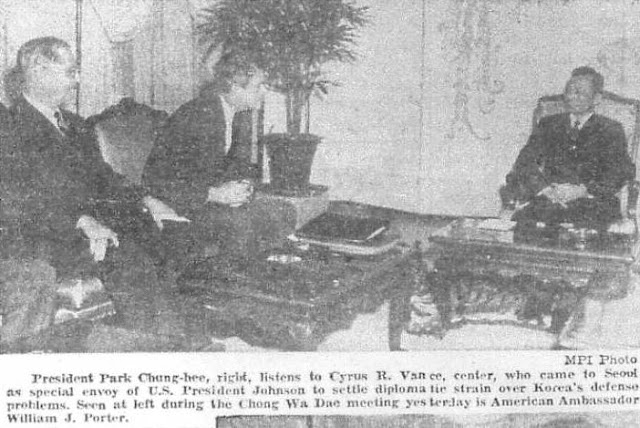 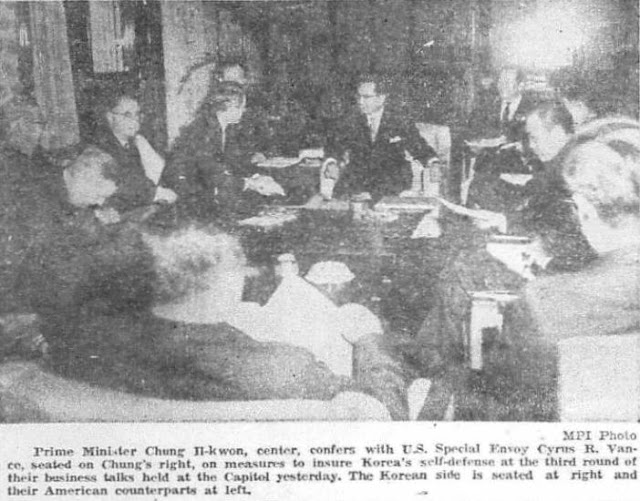 Vance and Porter meet with cabinet ministers, published in The Korea Times Feb. 14, 1968. 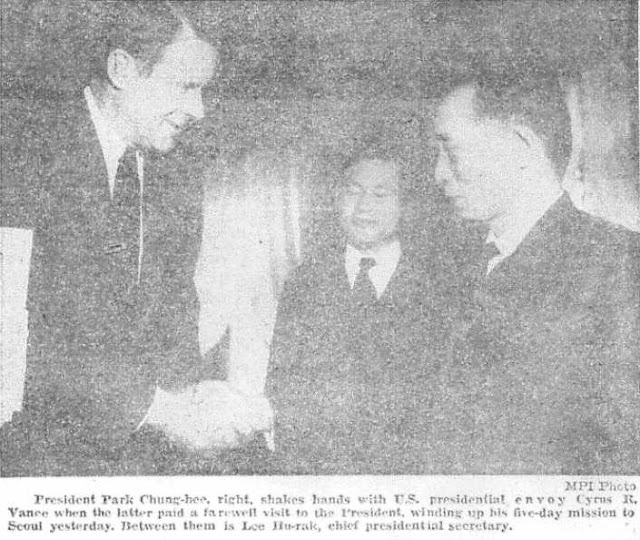 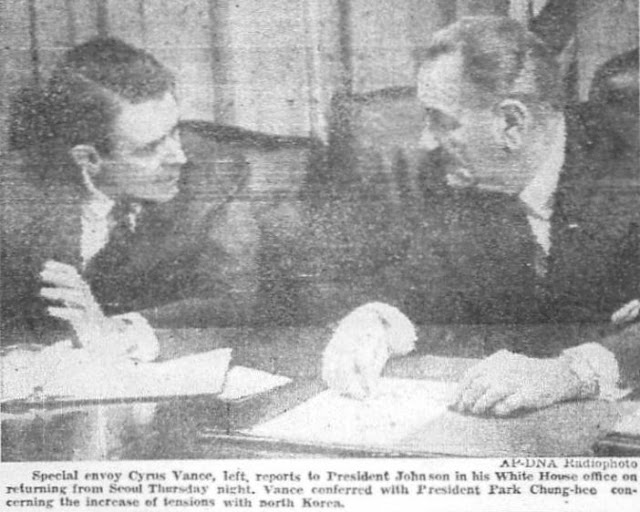 Vance and President Johnson discuss his visit, published in The Korea Times Feb. 17, 1968.
Posted by matt at 1:36 PM